Cast Nutcase is another puzzle in the Cast series from Hanayama designed by Oskar van Deventer. Measuring in at 1.25″ diameter, by just under 2″ long, the goal is to remove the small nut encased inside the hollow part of the puzzle by taking the two halves of the puzzle apart. Thanks to Puzzle Master for sending me this puzzle to review.

There is a second goal to the puzzle, but I’ll talk about that later … 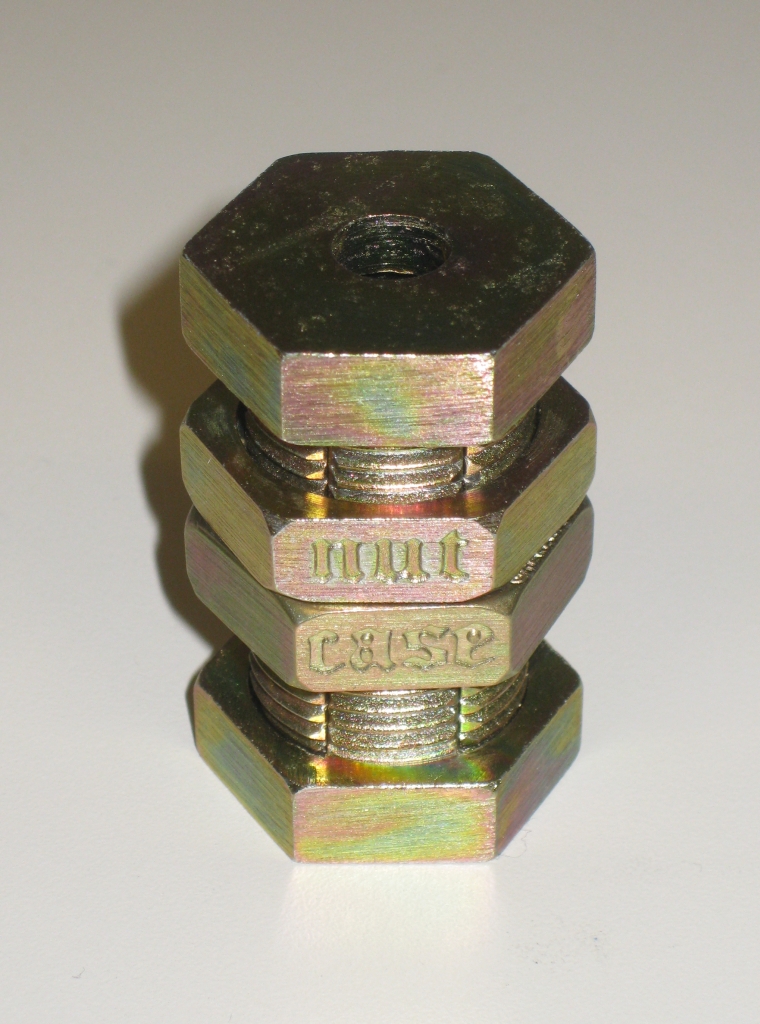 Cast Nutcase in the starting position

As you’d expect, the puzzle comes in the standard Hanayama black and gold packaging, with the puzzle held in shrink wrapped plastic to keep it in place. The puzzle consists of 5 pieces, including the small bolt that can be seen through holes in the ends of the puzzle. The two bolts threaded onto the centre of the puzzle will spin up and down the threads and each has ‘Cast’ and ‘Nut’ engraved into opposite sides of the bolt. The familiar Hanayama logo is also engraved into the edge of the bolt.

Closeup of the engraving on the nuts

The look of this puzzle is interesting as a galvanised, bronzed bolt, with some interesting patina patterning on various surfaces. It may not be the prettiest of the Hanayama puzzles, but it’s by no means ugly either. Looking at the puzzle, it seems impossible, as the two nuts in the centre of the puzzle are threaded onto a seemingly full thread which extends from one end of the puzzle to the other. The only clue as to what is going on is that the thread is not made from a single piece of metal, and it split into sections. Pulling on each end of the puzzle will show that the sections are alternately connected to either end of the puzzle, so there is some hope that the parts will separate.

Rated as 6/6 by Hanayama and 10/10 – Mind Boggling by Puzzle Master. I have to agree with this rating. It’s a tough puzzle and will certainly test you whether you’re a seasoned puzzler or not. It took me around an hour to open this one, and even then I think I may have been a little lucky. I could certainly see it taking a lot longer to open this puzzle. You should be able to figure this one out by looking closely at how things are put together, and from that work out what’s going on, but there could be a lot of trial and error before you get it opened. If you get really stuck, there’s a solution here. For me, this puzzle is a little like picking a lock, and feeling your way around what’s happening with little changes to the parts of the puzzle as you go.

The small nut free from it's "Nut Case"

My biggest problem with this puzzle is that the nuts don’t turn smoothly on the threads if there’s any misalignment at all. Given the way that the puzzle opens, and the design on the nuts, this is inherent in the design, and I don’t think there’s much that can be done to avoid it. Sadly, I feel that the sticking of the nuts as you turn them does detract from the overall experience, and I had several times where one of the bolts would lock up, and significant banging of the puzzle on my desk was required to get things moving again. Given that very precise alignment of the various parts is required to solve the puzzle, the stickyness does make things less enjoyable. Having solved this a number of times, keeping the threads aligned by pushing together on each end of the puzzle with one hand while turning the bolts helps however that is only useful for the first half of the solution. If things get misaligned, then it’s tough to get it back in sync.

Overall this is a challenging puzzle, but I fell there’s a little too much guess work and hidden trickery to make this a stand out puzzle. If you want a real challenge, then pick this one up, but if you’re just looking for a fun puzzle, I’d say it’s best to pass this one by.

Now, remember way back at the start, I said there was a second goal … 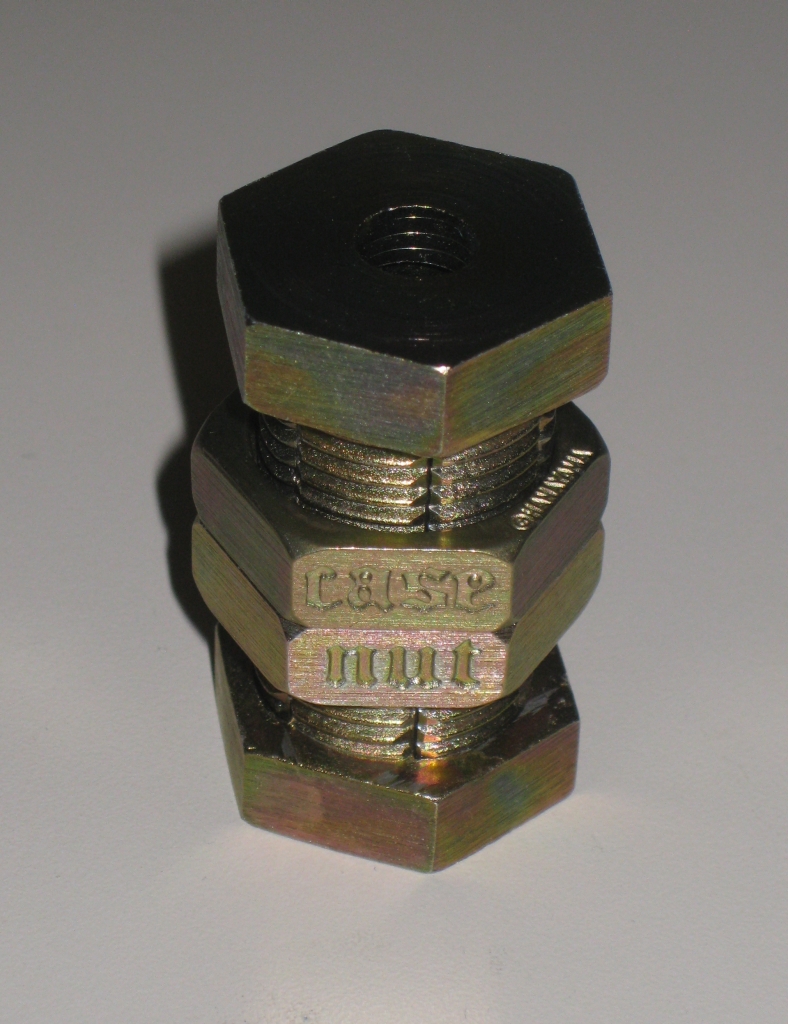 The second goal for the puzzle, just to prove it's possible

If you think that the first goal is tough enough, then I’d say stay away from the second. Once you’ve solved it a few times, and you know what’s going on, give this a shot.

Warning: this is a lot tougher!

The nuts on the puzzle are designed to go on in one orientation, so that when closed they spell “Nut Case”. But it is possible to reverse the orientation so that they spell “Case Nut”. The photo above proves that it’s possible. Now I will say, make sure you understand how to open it normally before doing this, as all the little markers you’ve used to solve the puzzle in its first configuration will be of no use to you! When putting the puzzle into this second configuration, things are much tougher, so don’t say I didn’t warn you. I think this puzzle may just go up to 11!