During the recent Baxterweb auctions I was fortunate enough to win a couple of puzzles. Hinged Box by Eric Fuller was one of those purchases. 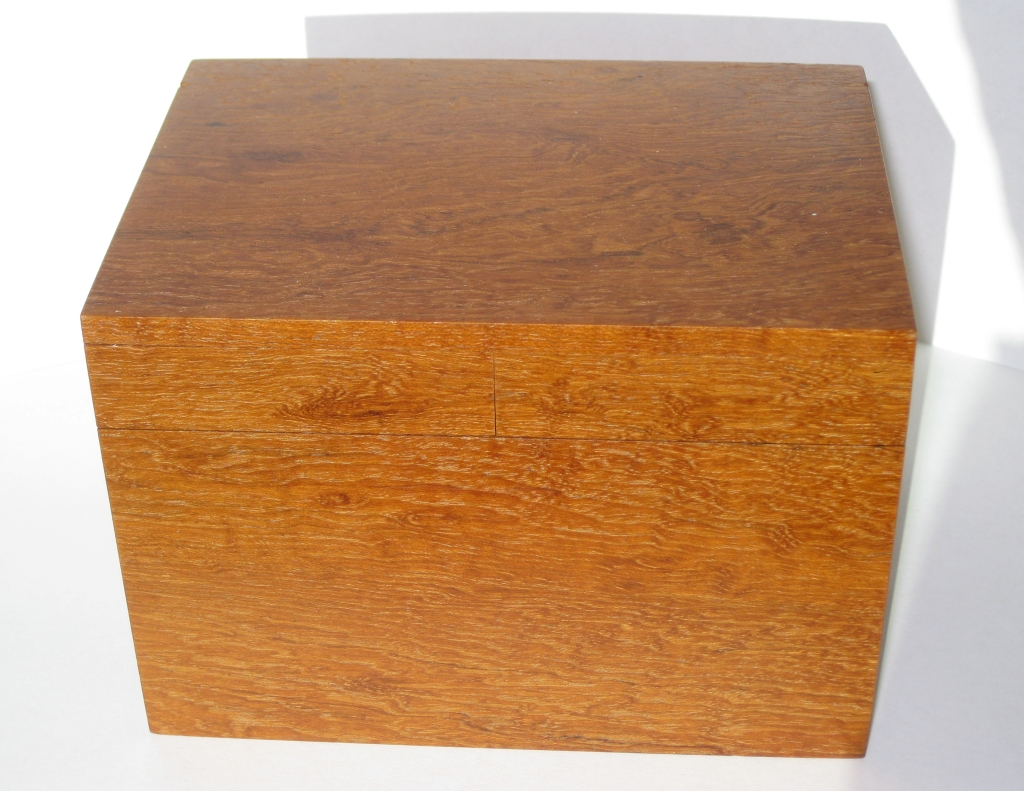 This beautiful looking puzzle is made from figured Teak, and really stands out as a great looking box. Measuring 6″ x 4.25″ x 4.25″ it’s not a small box either, so it stands out on the puzzle shelves, despite being a fairly plain ‘box’. The copy I have was listed as having a long scratch on it, but it took me quite some time to find it, and given that it’s underneath the finish, I’m pretty sure it’s been there since the box was made. Not that I’m complaining, it certainly doesn’t take away from the beauty of the box at all. Eric made this box in several woods. Have a look in the Cubic Dissection Gallery to see all the combinations which were available originally.

So why is it called the “Hinged Box”? Well this photo of the back of the box should clear things up. 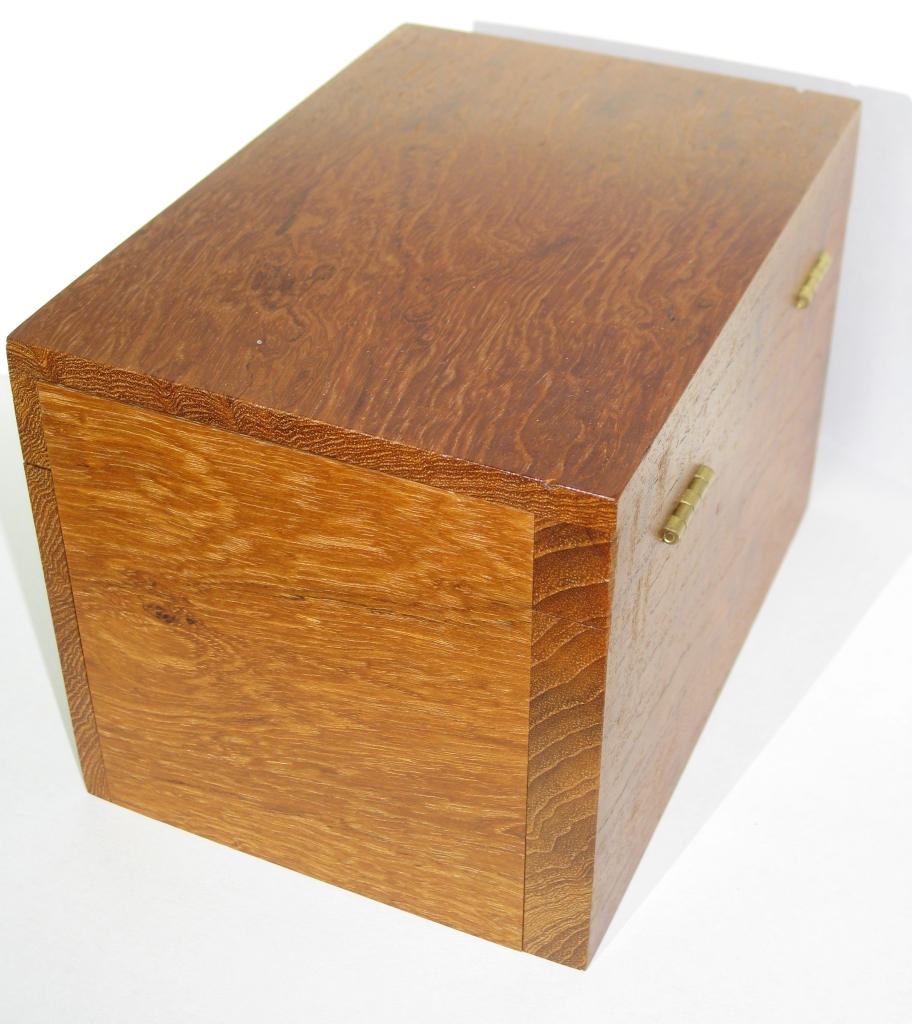 The back of the box shows two small brass hinges, and hint at the way the box will open. Of course, I’ve had puzzles before which have visible hinges at the back, and they were entirely red herrings, designed to throw you off. In this case however the hinges are real, and when you finally solve the puzzle, the lid swings open the way you’d expect.

I had this puzzle for several weeks before I solved it. My work schedule has been hectic (hence the lack of posts here) and as such I’d pick the puzzle up and play for a few minutes at night when I got home from work, but realise I was far too tired to apply logical thought to the box. As it turns out I found most of the solution fairly quickly. Some simple investigation will reveal a number of sliding panels, and a few panels which look like they should slide but don’t. More poking and prodding will get the panels which didn’t move freed up, and at that point I hit a dead end. I couldn’t see any more forward progress, and as such went backward and forwards with the moves I had found for several days.

One evening a few weeks ago, I was having a fairly good night puzzle wise, and I can only attribute that to having had a Sunday off for the first time in weeks as I’d solved several puzzles that had been sitting on my unsolved table. I picked the Hinged Box back up and within a minute had found the move which was eluding me and had the box open. 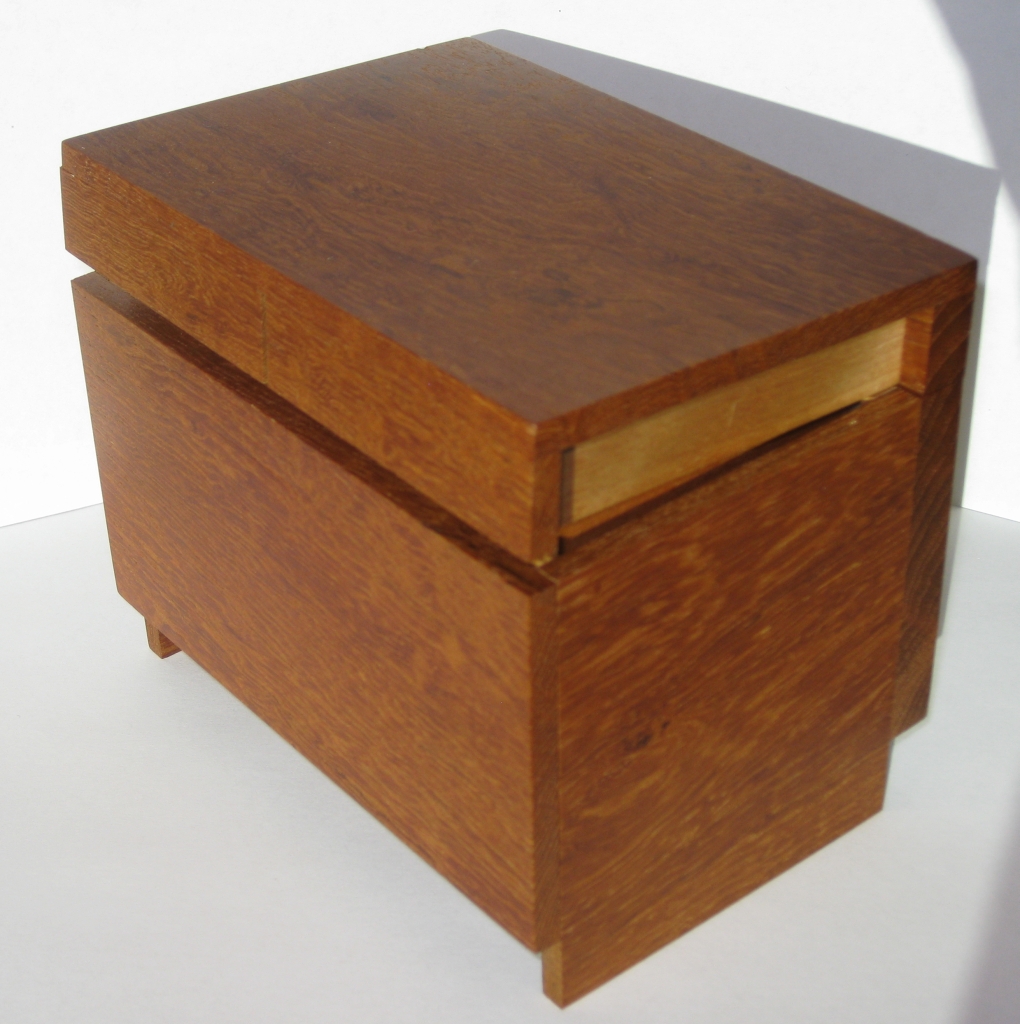 I’ve been careful not to give anything away as to how the box opens in the photo above, but as you can see it opens the way you expect it to given the hinges. Overall, this is a really nice puzzle, and the final move is very well hidden, and in my opinion rather unexpected. Great puzzle Eric, and I’m glad to have one in my collection.