Day four is the final day of this year’s IPP and is the last chance to play with puzzles from the Design Competition. The end of the day is marked with the Awards Banquet, and a very special event which I found out later on. Having played with most of the puzzles in the exchange, there were only a few I had yet to spend any time on, and I wanted to give as many puzzles as possible some time before casting my votes for the puzzler’s award.

There wasn’t really anything else going on in terms of formal events on the Sunday, it was a day to take in “The Mall” in DC, and to do some sight seeing, so Jen and I headed off for Arlington National Cemetery to watch the changing of the guard at the Tomb of the Unknowns. It’s a fairly impressive sight and something that I would recommend people do. Since World War II, The Old Guard has served as the official Army Honor Guard and escort to the president. In that capacity, 3rd Infantry soldiers are responsible for the conduct of military ceremonies at the White House, the Pentagon, national memorials and elsewhere in the nation’s capital. In addition, soldiers of The Old Guard maintain a 24-hour vigil at the Tomb of the Unknowns. Quite an honor and very moving. To see the ceremony, watch the video below which I took while there.

After that we headed for another couple of the Smithsonian museums, before returning back to the hotel to see who was around and get ready for the evenings events and the Awards Ceremony. The guys and girls from the Renegades Forums had already arranged to get a couple of tables together for the evening, so we met up slightly beforehand in the bar for a few drinks and the continuing rounds of puzzles being passed around. I haven’t mentioned previously (or at least I don’t think I have) that Ken Irvine was wandering around all weekend with a bag of puzzles designed by his good self. Ken doesn’t have a table saw so had to rely on the kindness of another Renegade to cut sticks for him, however the puzzle designs he handed round were superb. On one evening, Ken handed me a new 4×4 cube each time I solved, and restored the previous puzzle he’d given me. I’d very happily have taken any and all of those puzzles from him there and then, but he wasn’t selling them. Fortunately Tom Lensch and Eric Fuller are both making copies of his designs so keep an eye out for them. You’ll not be disappointed as the designs are great. Not too tough, but not simple either. Most didn’t have names, but the “Accordion Cube” is to be highly recommended. 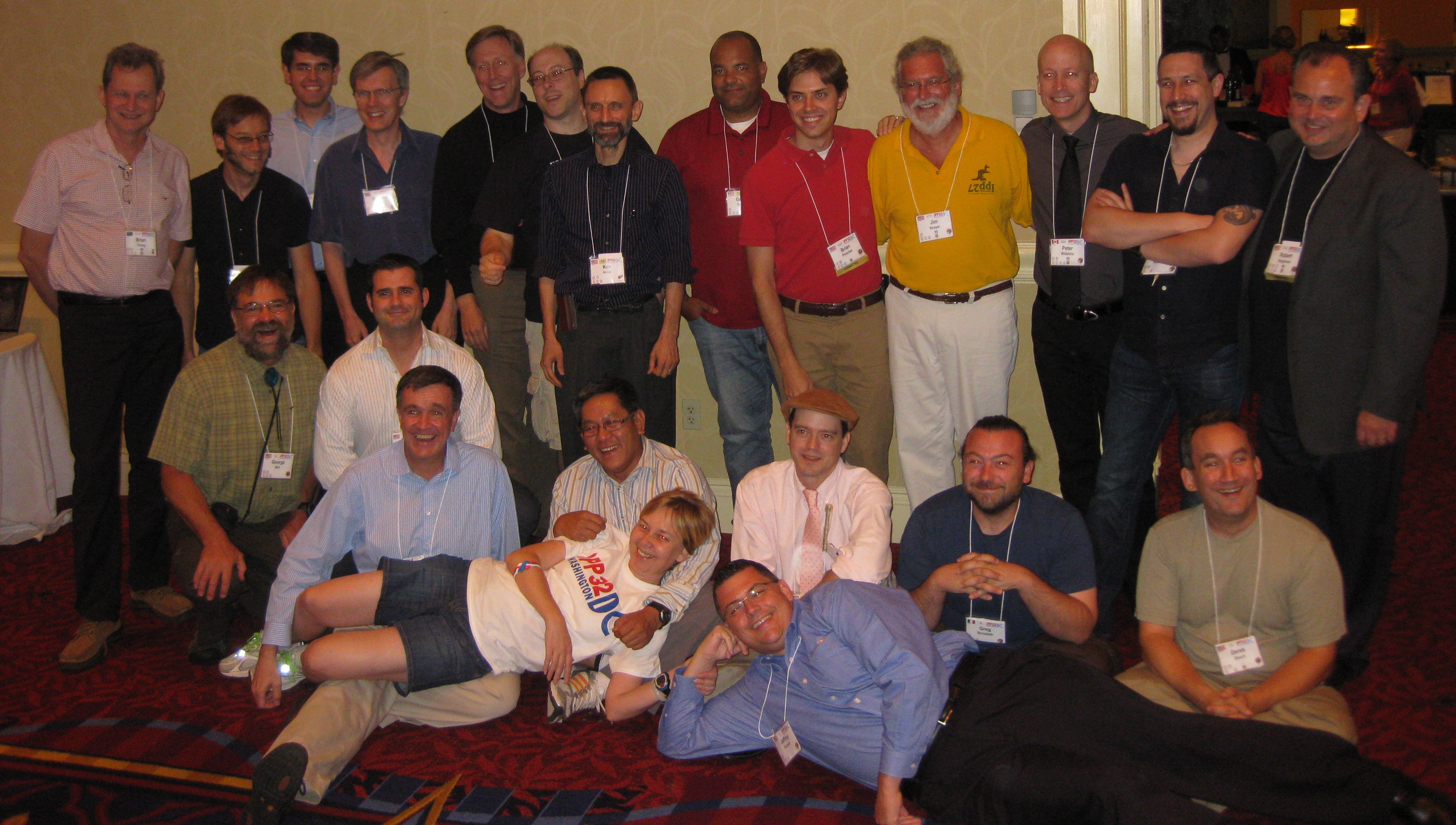 The Puzzlers of the Renegades Forums

The previous night we’d tried to get a photo of all the Renegades, but we’d had a few missing. Before the awards started Rox wandered onto the stage, grabbed the mike, and asked all the Renegades to meet at the back of the room. The photo above is the result of that request. It was a pleaseure for me to meet all of these people having talked with them online and been given so much advice and help as I started making puzzles. They are a great bunch of people in person, and I’m glad to be able to call each and every one of them a friend. Thanks for making my first IPP such a great event everyone! 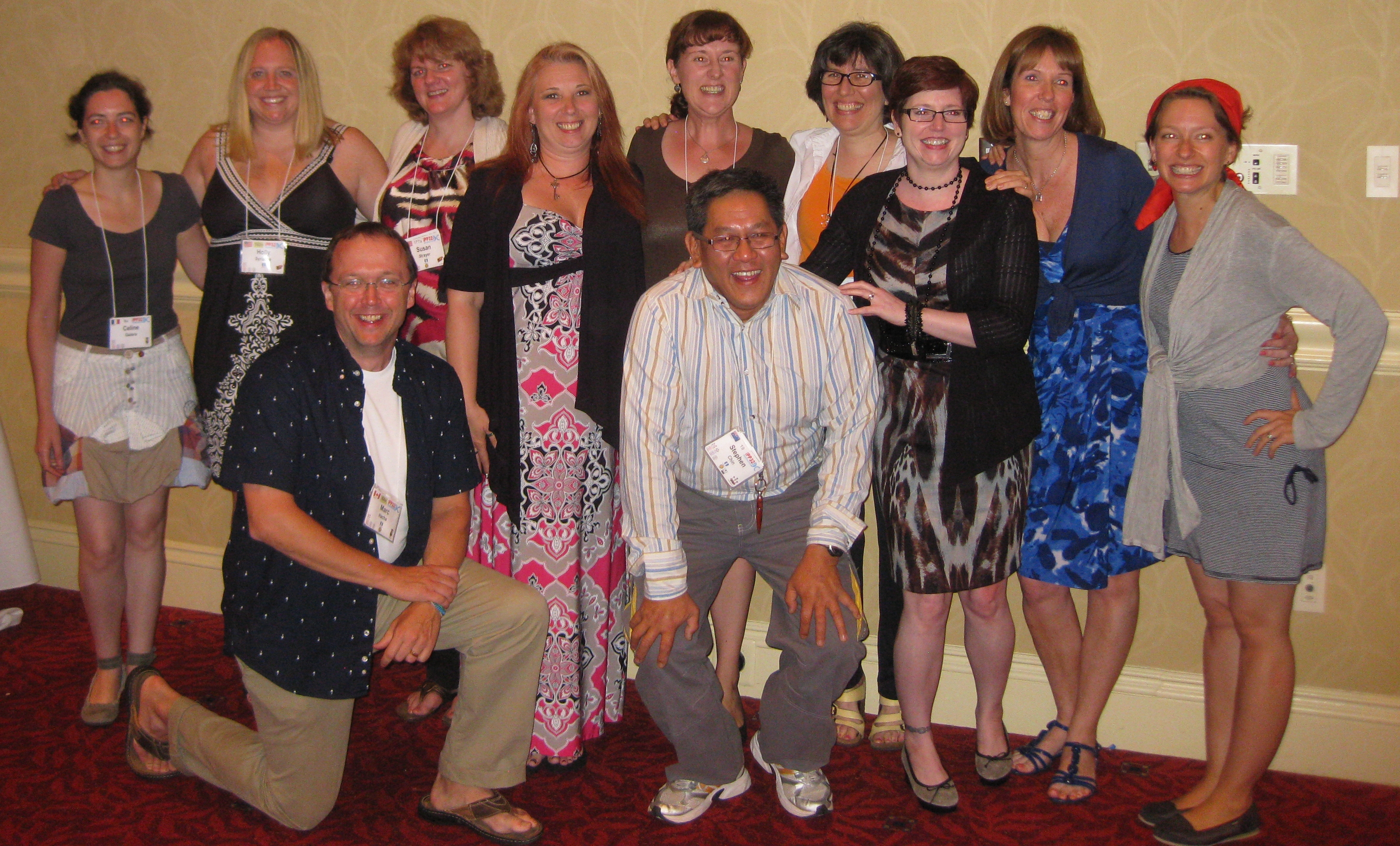 The wives of the Renegades

Of course the weekend wouldn’t be complete without the wives and other halves who put up with our puzzling addictions so thanks to all the ladies as well. I get the feeling some more good friendships were made over the week here too. 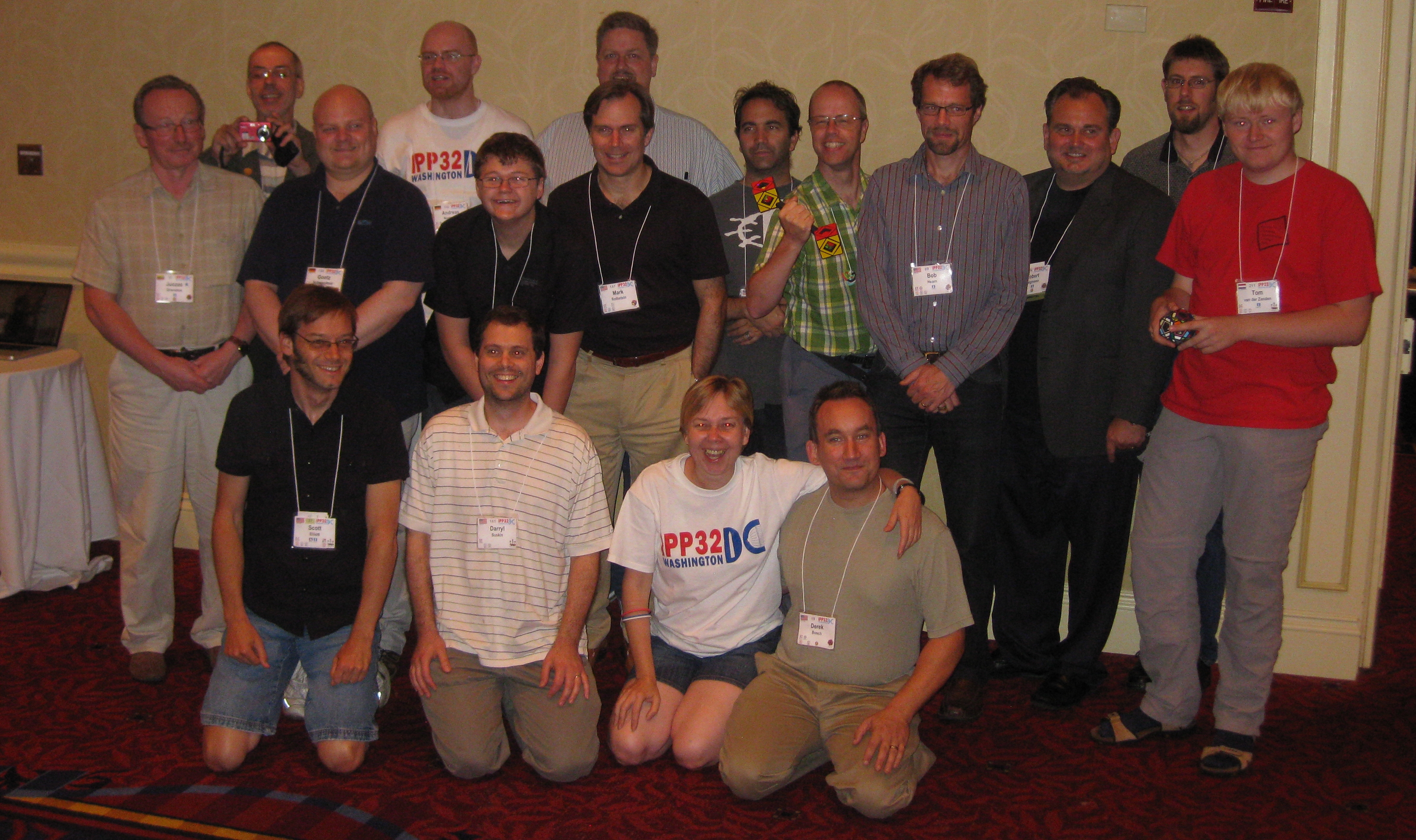 Next up was the turn of the twisty puzzlers, including Oskar working out with his Bar Bell. Now you know I’m not a twisty fan, but for those guys, here’s your pic. If someone can give me the list of names then I’ll gladly add them! 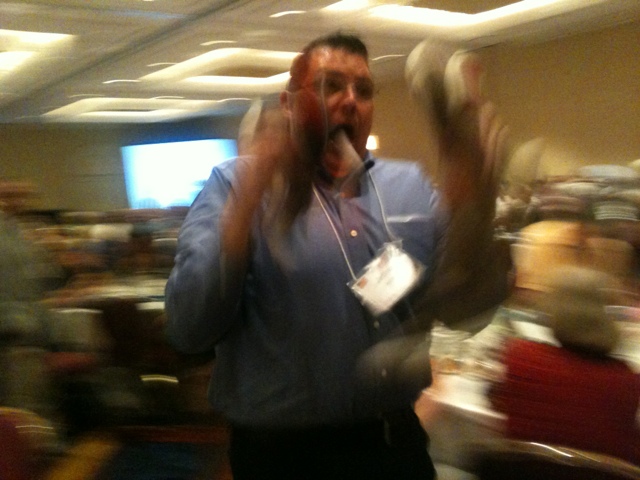 Jeff running around with Bug’s monkeys

There was a fair bit of fun going on too. Rox had her daughter with her for the week and she’d been carrying around a stuffed monkey for most of that time. Jen had taken her out and around on one of the days to let Rox go puzzling, and I think had become quite fond of ‘Bug’ as Rox refers to her. When we were out earlier, we’d come across a smaller monkey sporting dome DC gear, and Jen decided to buy it for her. Now when Jeff decided to steal the monkeys and run off with them, Bug gave chase. All in good fun, and certainly had a smile on everyone’s face.

Apparently there had been a few issues with long lines for food on the Friday night so this time tables were called out one by one. Given that we were at the back of the hall, we were around last to go out but there was plenty of food to go round. With everyone happily fed, the evening got underway. First up were the thank you’s and announcements about the locations of the next two IPP’s including some very convincing arguments as to why you should go. Obviously I can’t give anything away about where they are, but I look forward to both of the next two IPP’s!

So down to the nuts and bolts … who won? Well watch the whole thing on the video below.

The awards are as follows: 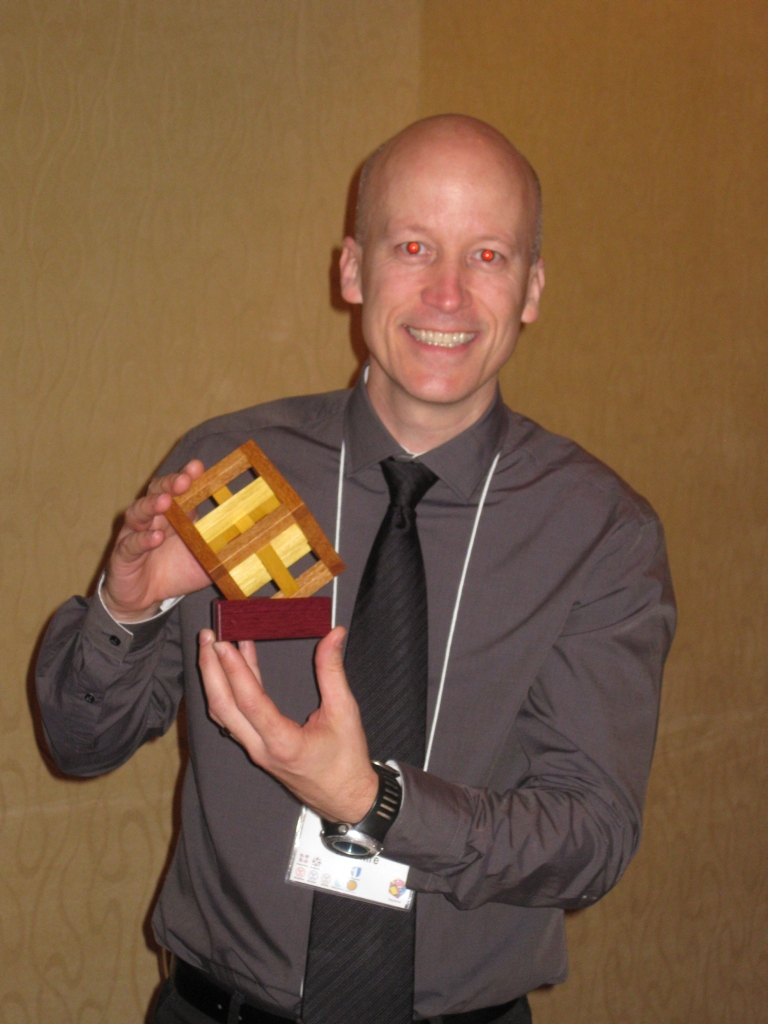 Peter Wiltshire with his prize 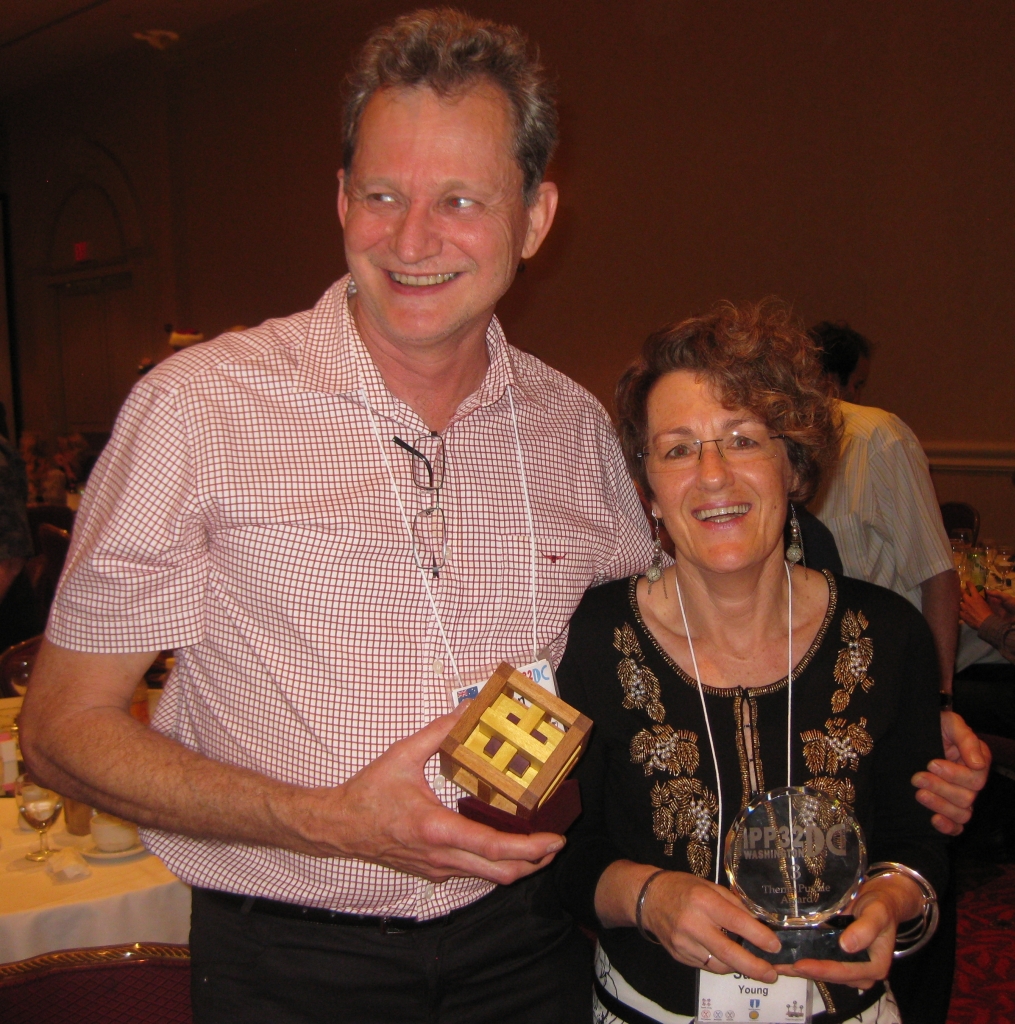 Brian and Sue Young with their Prizes

A huge congratulations to all the winners, and to everyone who entered a design in the competition. There were so many good design’s that it’s hard to pick winners. 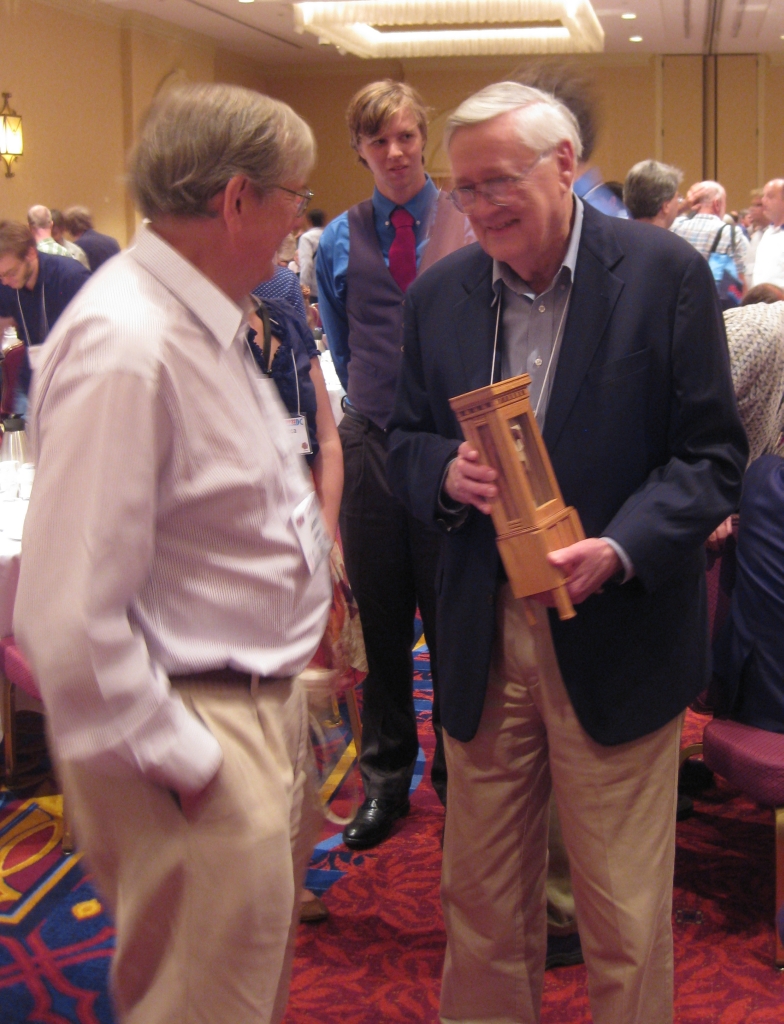 Jerry Slocum with the Grandfather clock talking to James Dalgety

There was also some sad news. Jerry Slocum is stepping down from his position as the head of the IPP. As such he was given the typical retirement gift of a watch. Well not really, he was given #1/28 of the Stickman Grandfather Clock puzzle. A truly fitting gift and a great puzzle to boot.

Chris Morgan with the host gift

There was one final gift to be given, and a few of us had heard that such a puzzle existed, and were excited to see it. That gift is the Host Gift, given to the host of the IPP and is usually a unique puzzle made with either the host or the city in mind. Chris Morgan is a bit of a musician and was presented with Kagen Schafer’s Pipe Organ Box as this year’s gift. It’s a beautiful puzzle, and a truly unique piece. I look forward to seeing the opening of it at some point. 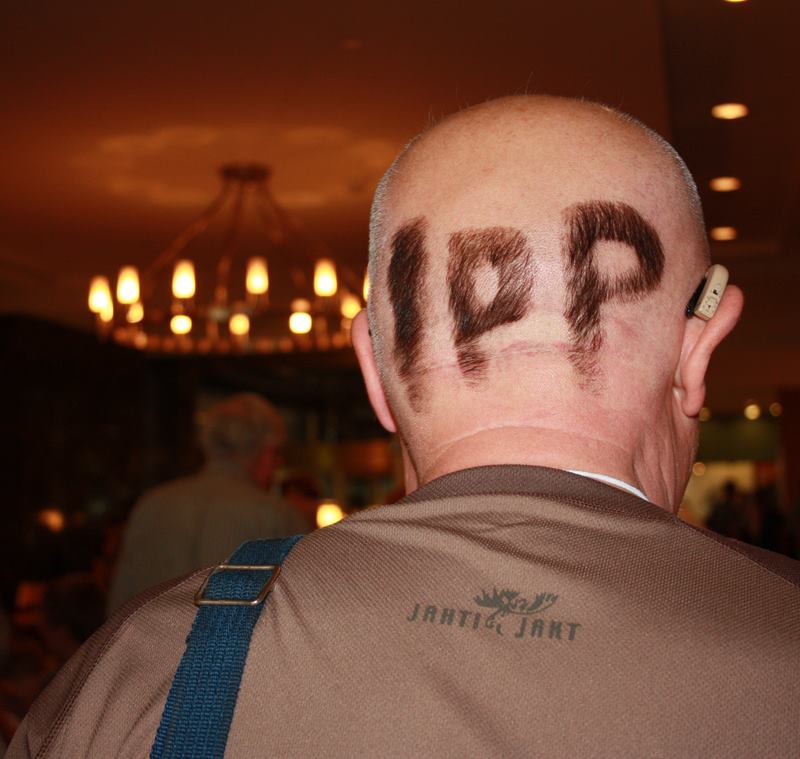 There was one final part of the night which it would appear is the true end to the IPP. Each year Matti Linkola has had his hair shaved into the IPP lettering you see above, and each year at the end of the IPP, he has the letters shaved off, at the end of the Awards Dinner. So the scissors came out, and the Letters came off. Matti had a story for us though before the job was completed. Apparently his barber has told him that this will be the last year he can do this, since he’s not enough hair left to keep doing it! 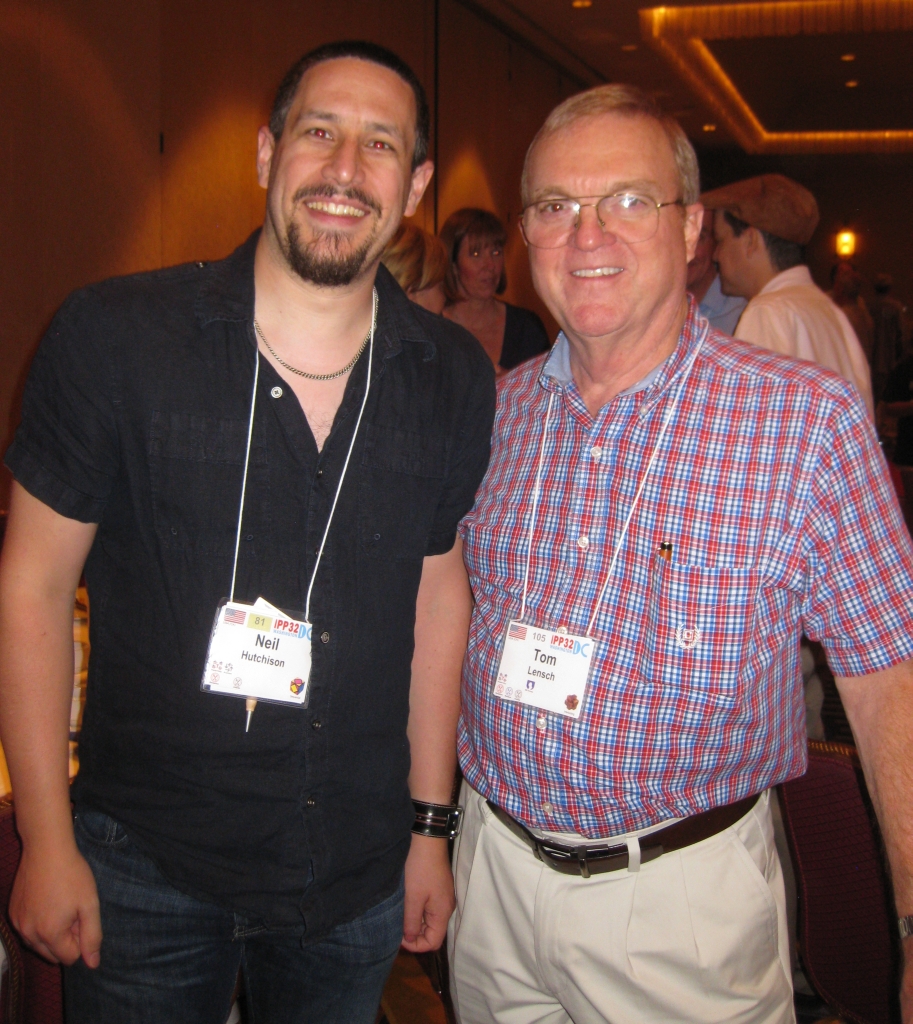 Me and Tom Lensch

At the end of the proceedings, I had Tom Lensch come up to me and ask for a photograph with him as he hadn’t met me before. The really amazing part for me was that Tom asked to see one of the puzzles I’d made. I had one left, so I went and grabbed it for him to see. He was very encouraging and like everyone else there gave me a few tips and some advice which is more than I could have hoped for. Thanks Tom, it was a pleasure to meet and talk to you in person!

After the celebrations were over people started to drift off and say goodbyes, and the Renegades returned to the lobby to continue talking and to have another pint. There’s so many more stories from the evening, but I think I’ve written enough for one post so that will have to wait.

Next up I’ll start reviewing some of the great puzzles I played with throughout the week, and share my thoughts on them.