This is the first puzzle review I’ve done here, as I’ve not made any real progress on my own puzzle, so I thought I should throw something up about the three Karakuri Christmas boxes I was lucky enough to get.

For those not familiar with the Karakuri group, they are a set of master puzzle designers in Japan who create exquisite puzzle boxes. Of all their work I have seen, from the simplest and cheapest of their works, to the most complex, all are superbly handmade from some beautiful woods, and will look superb in any collection.

I was lucky enough in the post Christmas lottery to get all three of the boxes I was looking for. They are “The Magic Hat” from Shiro Tajima; RL and Snake Cube from Hideaki Kawashima. 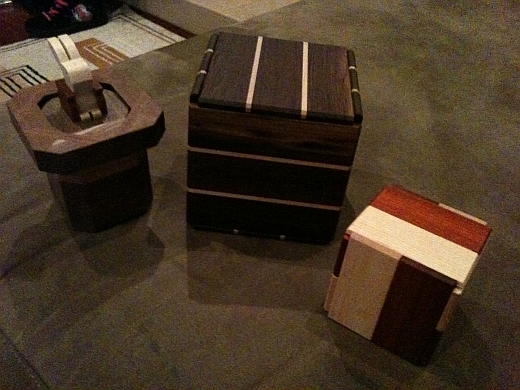 All three boxes arrived inside their own cardboard box, and sealed in plastic inside that box. It may seem strange but all three of these boxes are fairly large for puzzle boxes. RL is the largest at 7″ cubed.

After opening these, I played briefly with each, but couldn’t open any of them. With the exception of the Magic Hat, the others had a standard sliding panel mechanism, however they didn’t open obviously. 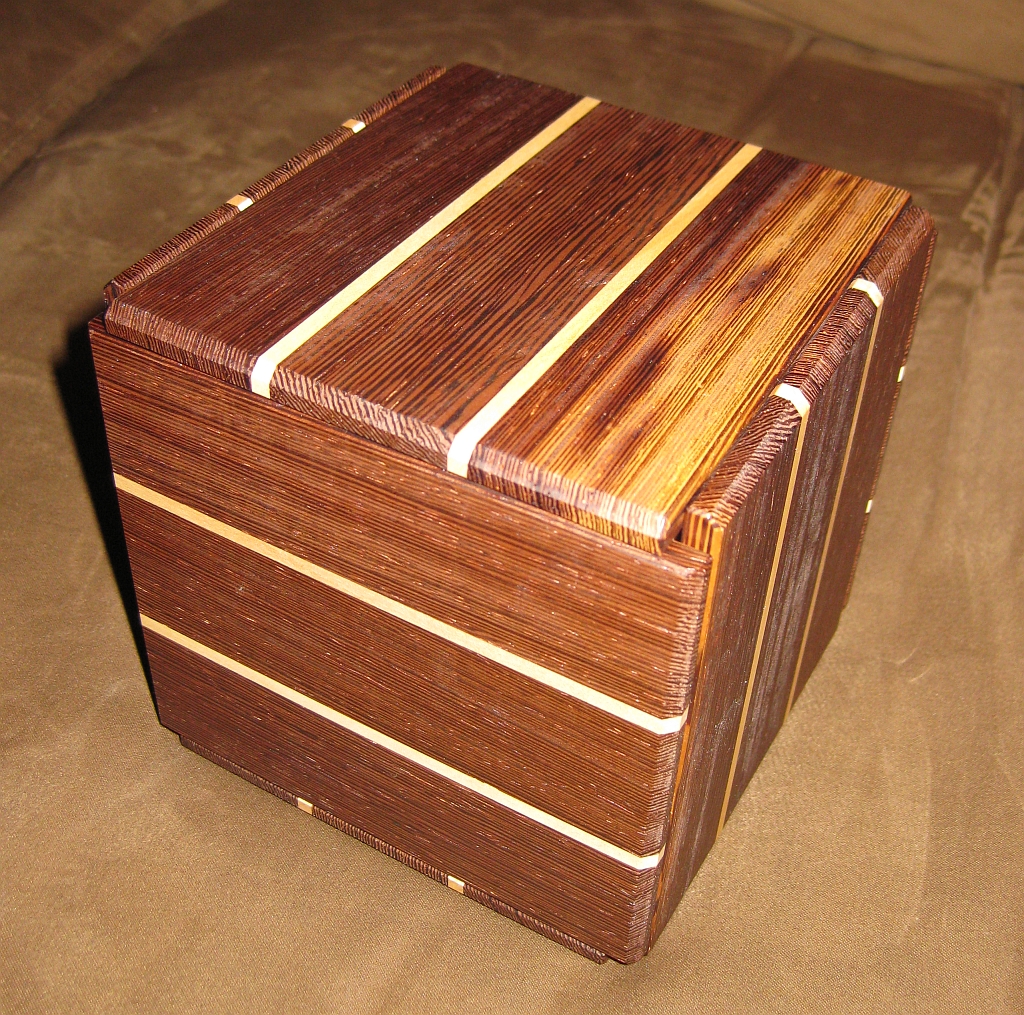 RL was the first I opened, and it has a rather nice mechanism. Without giving anything away, there is a dual mechanism here that may throw some people off, making this more interesting to give to your friends to try. It took around 10 minutes for me to open this box, and it opens in 3 moves, so not a complex box by any stretch however it is a very pleasing box with a good internal space. I also think there may be a second compartment in this box, so I will play with it more to see if that is the case. The contrasting woods used here with the dark main panels, and the light stripes gives the box a very strong presence. Mr Kawashima even added a note to say that with age, the dark wood will continue to darken which is nice, so you don’t think anything is wrong with the puzzle. As someone who is working with wood, I know this and it’s entirely natural, however not everyone may know that this could happen.

My box has a couple of lighter areas in the dark wood, which is probably a result of the piece of wood being used having been covered where the rest was exposed to light. You can see this in the picture, both on the top panel to the right and the top of the front panel. I have no issue with this, and it will darken within a short time, but it may upset some people as they may feel it detracts from the look. Personally, it’s wood, I love that it’s not a ferfectly uniform colour.

As a slight aside, Purpleheart which is a vibrant purple when first cut, will become a darker brown with age, so although a lot of puzzle designers and wood workers like it for it’s bright purple colour, it is work remembering that it’s not going to stay that way. 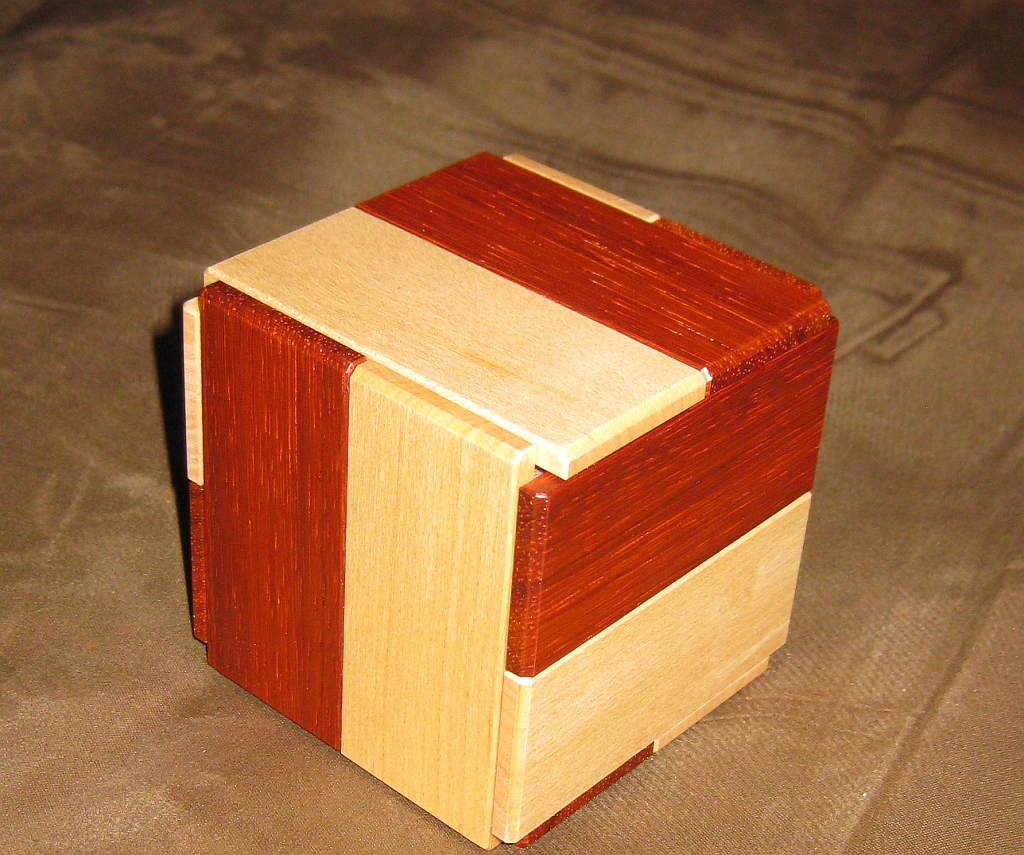 The Snake Cube was the second cube I managed to open however it really should have been the first. It has a fairly standard sequential sliding panel mechanism, however the final move caught me out. I expected the panels to continue to slide, however once the lock mechanism is released, the lid lifts off. It’s very well seated so doesn’t fall off, and you can move the box around quite easily without discovering this (as I did for about 10 mins). On my third attempt (and after having opened the RL box) I opened this since the final step is the same. The contrasting red and light woods used on this box give it a really pleasing look, and it’s a nice piece to display. I feel all the works from Karakuri fall into that category though. 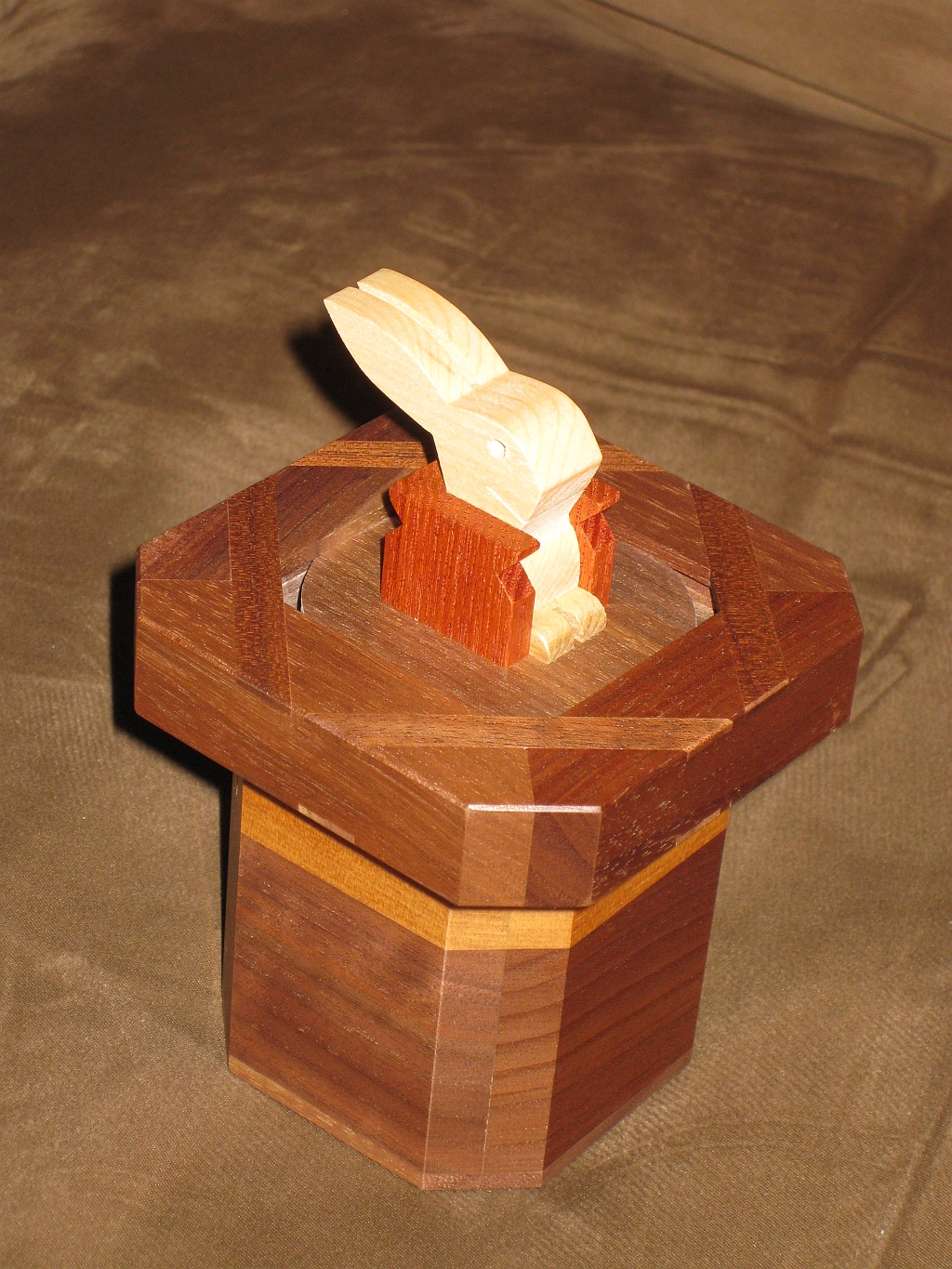 The final box I opened was the Magic Hat. This is a beautiful box, that seems to have no obvious way to open it. The Rabbit on the top is attached to a circular piece of wood under the lip of the hat rim, and will spin freely. Nothing else seems to move, and spinning the rabbit just makes him (or you) dizzy. I did eventually figure out how to open this box, after around 30 minutes, and was treated to a wonderful detail inside the box. The mechanism is remarkably simple, which I think adds to the effect when you finally open it. Of the three this is probably my favourite, as it has the best fun factor, and will be a piece that people want to pick up when they see it.

2 thoughts on “Some New Puzzles”