Thanks to the kindness of fellow puzzler Derek Bosch, I have a host of new Karakuri puzzles on loan to test my puzzle solving skills. I’ll be going through those puzzles and reviewing them as I go. This is the first in that series of reviews.

Note: This post has been modified from it’s original posting to remove potential spoilers. 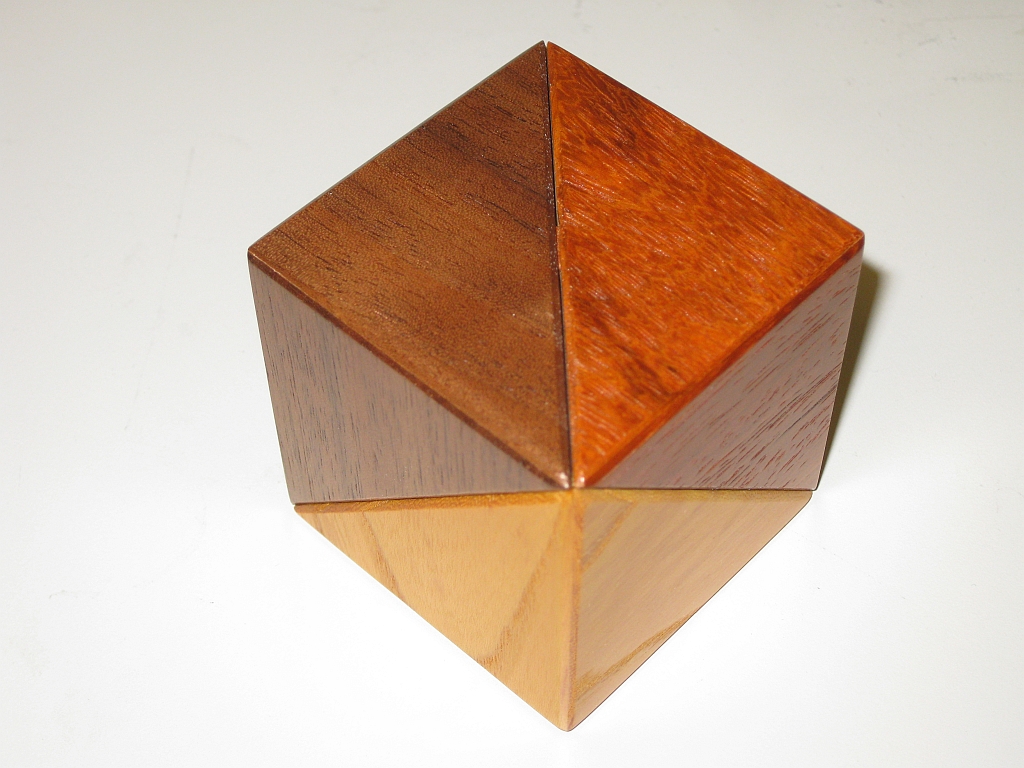 This box was made as a Christmas present for Karakuri Club members in 2005 by Kamei, and has the code M-34 from the Karakuri catalogue. The box is made from Walnut, Keyaki, Rose-wood measuring just over 2″ x 2″ x 2″.

The Karakuri information about the puzzle box says ”
Kamei divided a cube into four triangular pyramids. Of course Kamei had to create a new way of opening it and the new mechanisms for this box only. At first Kamei imagined that each triangular pyramid should move radially. But Kamei gave up this design because the mechanism became too complicated. Finally Kamei decided on “Translation”.

I’m not sure how much that tells you about the box, but I always find it interesting to see how the designer describes his puzzles (or her, I’m not sexist here!)

The box itself looks great, and as with all of the Karakuri boxes that I have opened, the fit and finish of this box is excellent as you would expect from a Karakuri box. Initially there is no obvious movement from anything on the box, and no rattles to indicate a hidden mechanism. Given the way the outer panels have been designed, there’s little to help you get a hold on the puzzle to start trying to move the panels. That mirror finish makes things tough.

Fortunately, the grooves between the panels are fairly deep, and allow you to get a purchase, to start checking for movement. Before too long you’ll find a panel that moves, then another and another. The box expands slightly as you move each of the panels in turn, releasing the locks keeping the box closed.

Clicking the image below may show spoilers. Don’t click if you don’t want to see.

After unlocking the box, it splits into two halves and in one Kamei has stamped his signature. It’s a nice mechanism, and I dread to think what Kamei was trying to do originally that became too complex. One thing I have found is that putting the two halves back together to close the box is a little tricky. The fit between the sections of the puzzle is so tight and given how the panels are arranged, it’s very easy to close one, which will prevent the lid from being able to be placed back onto the base.

This is a very nice box, and is typical of Kamei’s work. Unfortunately, as this was a Christmas Present it is no longer available, so the only way to acquire one would be through a puzzle auction. If you get the chance I’d recommend it as it’s not only a good looking puzzle, but a novel mechanism as well. Thanks again Derek for lending me this puzzle box.