Yet another of the Karakuri puzzle boxes on loan to me from Derek Bosch is “Box with a Tree” designed by the very talented Hiroshi Iwahara. Originally made in 2005 using Japanese Walnut and Oak as the members Christmas Present, it has been remade several times with different external plates since then. First in 2007, then again in 2011. 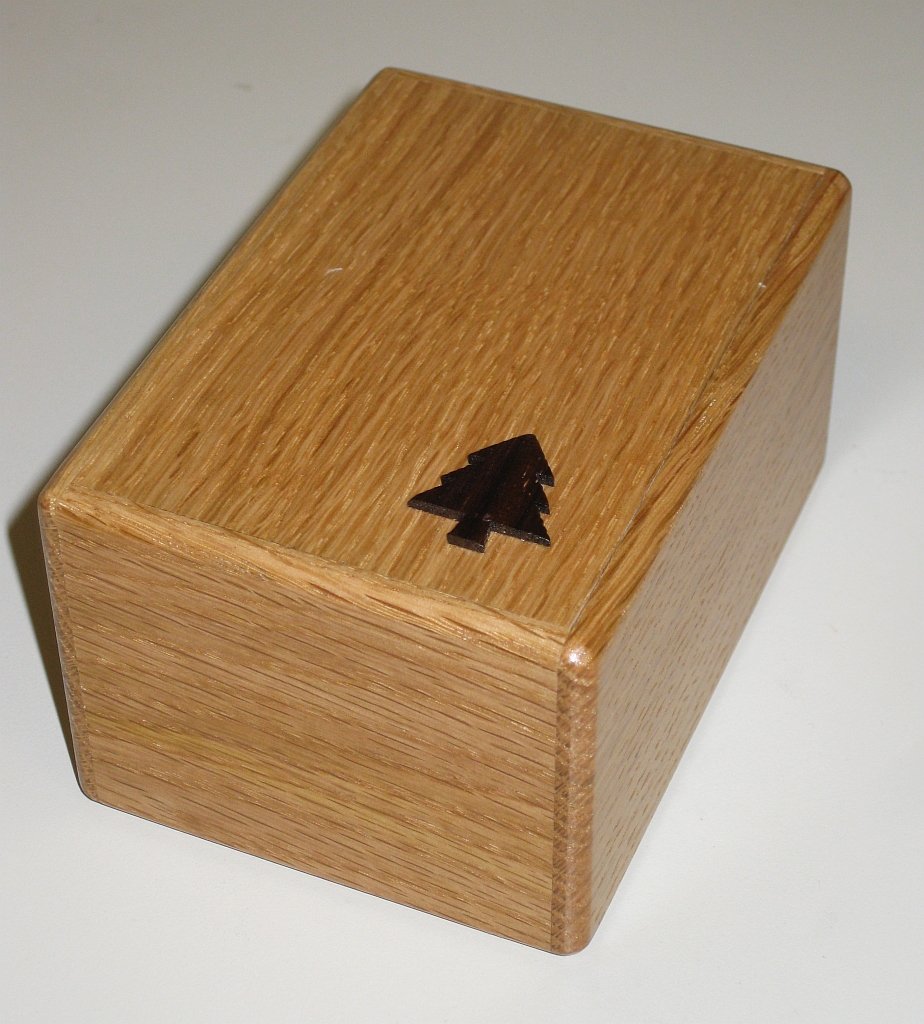 Box With a Tree

One thing you will note about this box is that it is very plain. There’s little fancy about it, even the small tree which sits proud in the bottom corner is simple and not ornate. Some of the newer versions are made from more exotic woods, such as the latest version in Lacewood, but in general it is an unassuming puzzle box.

That plain exterior belies the complicated interior waiting for the unwary puzzler. The two end panels both move with little resistance, and there the motion mostly ends. The top with the tree will lift slightly after the end panels are slid out of the way, but there is no way the box is going to open.

With a lot of playing around, I found some strange things happen with the end panels depending on what you’re doing with the box. I played around like this for a good few days, seeing no real progress toward opening the box. It always seemed that there was something preventing the top from lifting fully, and I wasn’t doing anything differently enough to change that.

With insanity setting in as a result of trying the same thing over and over again, expecting a different result, I took a break from trying to open this box to try a few of the others I had on loan. When I came back to the box with a tree, I had a few different ideas, however none of them worked. I played idly for 10 minutes, only half looking at what I was doing, and, yes, you guessed it, opened the box. What had I done differently?

And then couldn’t open it again! After another few attempts, I finally understood what I need to do to be able to open the box consistently, and I really love the mechanism. I take my hat off to Hiroshi Iwahara for designing such a clever mechanism.

So here’s the kicker. The mechanism isn’t visible when the box is open, and I really don’t think you get any clues from seeing this puzzle box open that will help you re-open it. So much so, that I opened this box in front of a few friends, let them see the box open, then closed it and challenged them to re-open it. And they couldn’t despite watching me open it in front of them.

This is a brilliant puzzle box, and probably my favourite of the boxes I was given a loan of and have opened so far. If you see this box for sale, I highly recommend adding it to your collection. Thanks again Derek for kindly lending me this puzzle.

3 thoughts on “Box with a Tree by Hiroshi Iwahara”