Continuing in my puzzle reviews, today I have the pleasure of reviewing my Danlock ‘B’ puzzle lock. 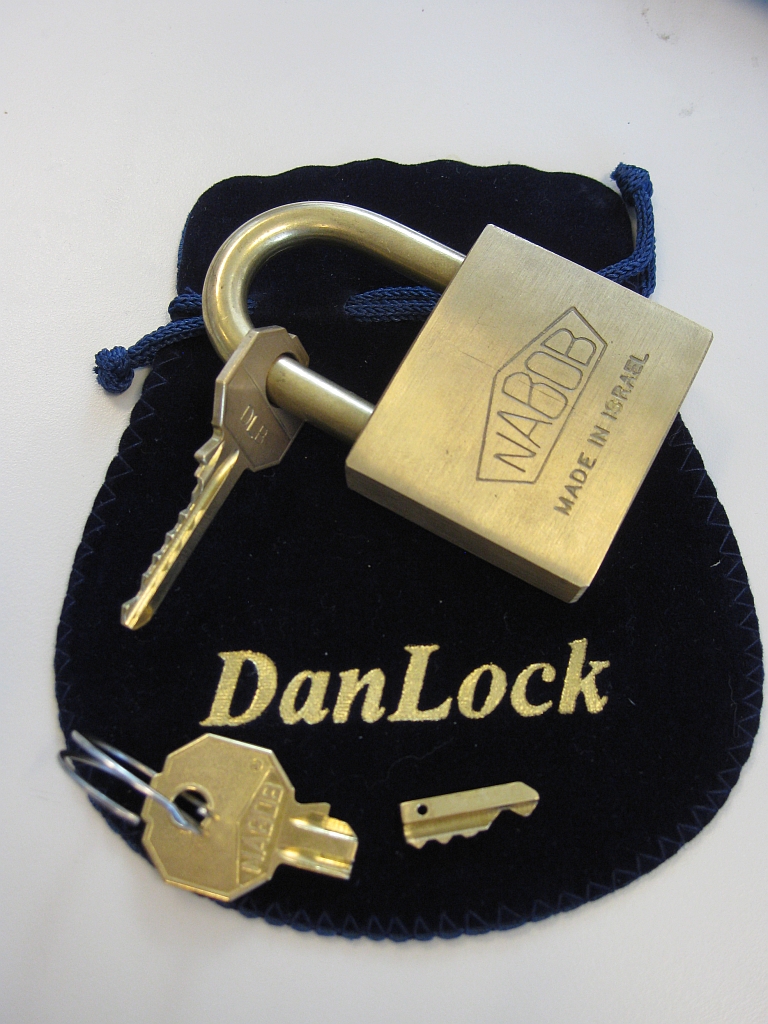 I’m no expert on puzzle locks, and in fact, this is the first and only puzzle lock in my collection. Having spoken with a number of puzzling friends, they all recommended the Danlock, and by most it is considered the Rolls Royce of puzzle locks. So why the high accolade?

Well the reason comes from the fact that this is a real padlock. Dan Feldman buys the Nabob padlocks, which are made in Israel, and modifies them into these trick locks. So what you have is a solid brass padlock, with a real lock that makes a really solid puzzle. As you can see from mine, the evidence of the conversion is worn on the face of the lock. Mine has several scratches and wear marks from where it was worked on. I don’t think it takes away from the puzzle, and if anything I feel that it adds to the effect.

So down to the puzzle itself. You’re presented with two keys, one shacked to the padlock itself, and the other which Dan has kindly cut in two. The object is to open the padlock, then return it to the state you see in the image above. You’re not allowed to use anything other than that which you find on the puzzle itself, (so no paper clips!) and the best comment I heard was “You can solve this puzzle locked naked in a padded cell”. While I don’t suggest this method, it is true. Everything you need is right there.

With this being my first trick lock, I wasn’t really sure what to expect, but I promptly set about trying to open it. Taking that leap of faith and sticking the broken shard of key into the lock, I quickly had it open, but what next.

All I’ll say is that there are a number of ‘aha’ moments with this puzzle, and it really is well designed and made. All told it took me about an hour to solve the puzzle, and get things back into their original state. A great puzzle, and I can’t recommend it enough to any collector.

So one last thing to say about it. I noted that I have a Danlock ‘B’. Dan made two version of this puzzle. The ‘B’ is revision two if you like and has an added twist over version ‘A’. Having talked with a friend who has the ‘A’ the difference is subtle, and if I’m honest I don’t think it adds a huge amount to the puzzle, however it could prevent someone from finding the final move for just a little longer. If you get the chance, pick up a rev ‘B’ but if you already have an ‘A’ then I’d say there’s not enough extra there to justify adding a second version to your collection.