Chip was created as a Christmas Present in 2007 for the Karakuri group members by Hiroyuki Oka. It’s name comes from the small ‘chip’ of wood which is stuck to the top of the box by a magnet. This is the last of the Puzzle boxes Derek Bosch recently lent me to solve. 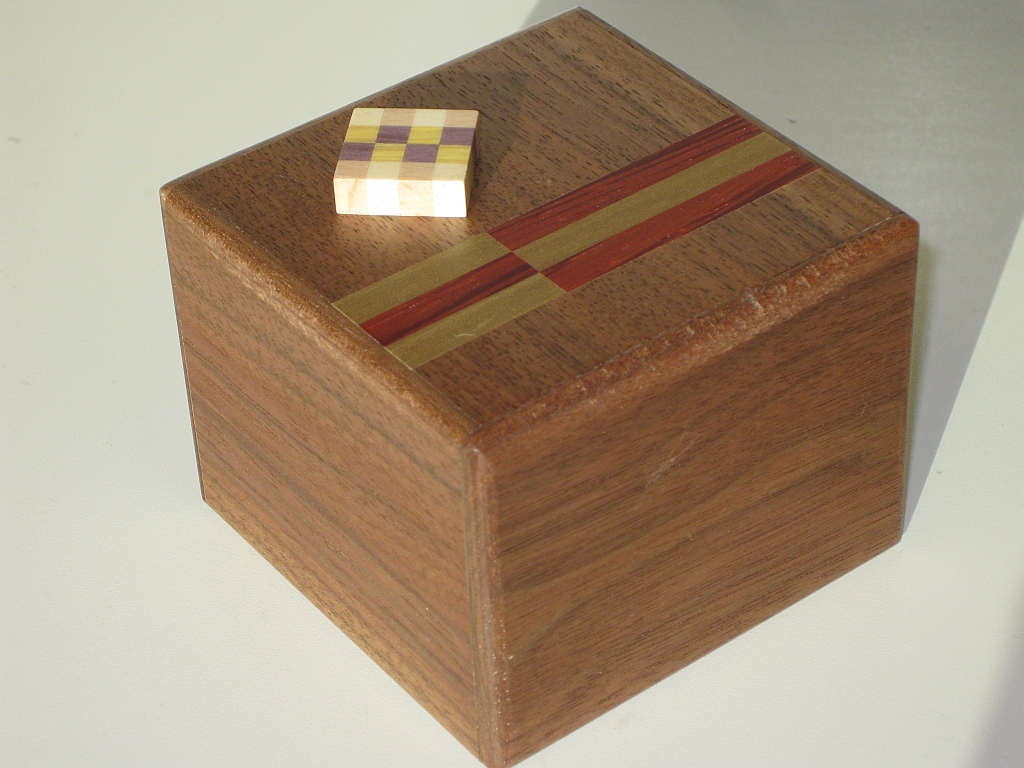 Here is what Hiroyuki Oka has to say about this puzzle box:

This is one of the Secret Boxes. At first, you need to move a device to open the box.. But you can’t see the mechanism from the outside. Maybe you can find the place of the device with the attached small wood plate.

Made from Walnut, Katsura Agathis, Rengas and Magnolia, there’s a lot going on in this box. The inlay is nicely done, and adds detail to an otherwise plain box. The checker board chip made from a number of small cubes laminated together is a nice touch as this didn’t have to be such an ornate part of the puzzle. The box is a slightly squashed cube measuring approximately 3.5″ x 3.5″ 2.75″.

As the description hints, there is a hidden mechanism in this box, and the small chip attached to the box is the clue to finding it. There’s nothing hidden about the fact that the chip is held in place by a magnet as its visible when you flip the piece over.

Initially, none of the panels on the box will move at all, so whatever is keeping the box locked needs to be moved before anything else will happen. Having had a few other puzzles in the past where magnets have been used, I tried all sorts of ideas like flipping the piece over to repel the magnets, hoping this might move the device and let me open the box, but I was having little success.

With a closer inspection of the box, and a lot of searching I found what I was looking for and what the description hits at. After that it was a fairly simple sequence to open the box requiring only 5 moves.

I think I spent around 20 minutes on this puzzle to open it and while I do like it, it’s not one of my favourites. The walls of the box are just a little too thin for my liking, to the point that the base has a degree of flex if you press it, even gently, with your fingers. (And most people familiar with Japanese puzzle boxes will use several fingers and press gently while pushing panels to see what moves.)

A nice box, and I am grateful to Derek Bosch for lending it to me so I could solve it.

P.S. Happy 4th of July to all my friends reading in the US.