The start to many a good puzzle is a square stick. But not just any square stick. One which is accurately sized along its length and each side square to its neighbor. Not an easy task.

A while back, Scott Peterson sent me a tutorial for building a table saw jig to create square sticks. Over the Labor Day weekend which is a holiday for us in the US, I set about making the jig (mostly) following Scott’s tutorial so that I’m firmly on the road to making my own puzzles. Scott kindly game me permission to make the tutorial available to anyone that wants it, so feel free to download a copy.

The following is my attempt at creating square sticks …

Starting off with a sheet of 3/4″ MDF I cut myself a strip that was wide enough to go between the miter slot and just past the blade of the saw. I left a good sized area on the other side of the miter slot so I had room to attach a handle to help push the jig through the cut, and back after the cut. I marked the position for the miter bar and after pre-drilling the holes, screwed it in place. 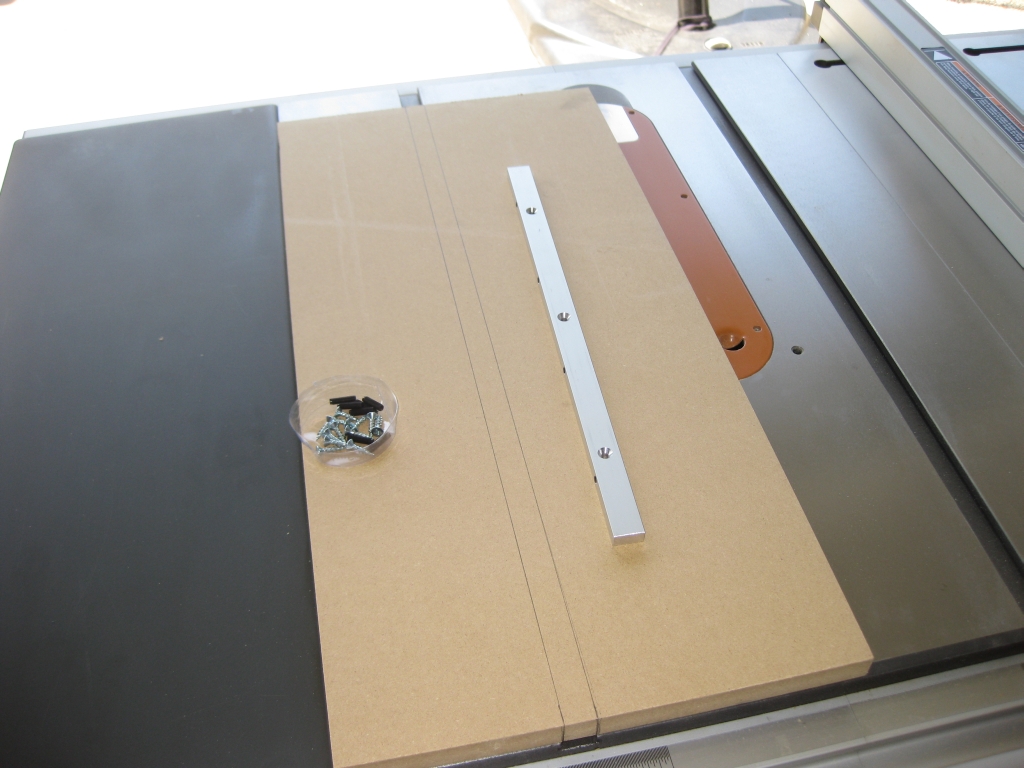 Preparing to attach the miter bar. 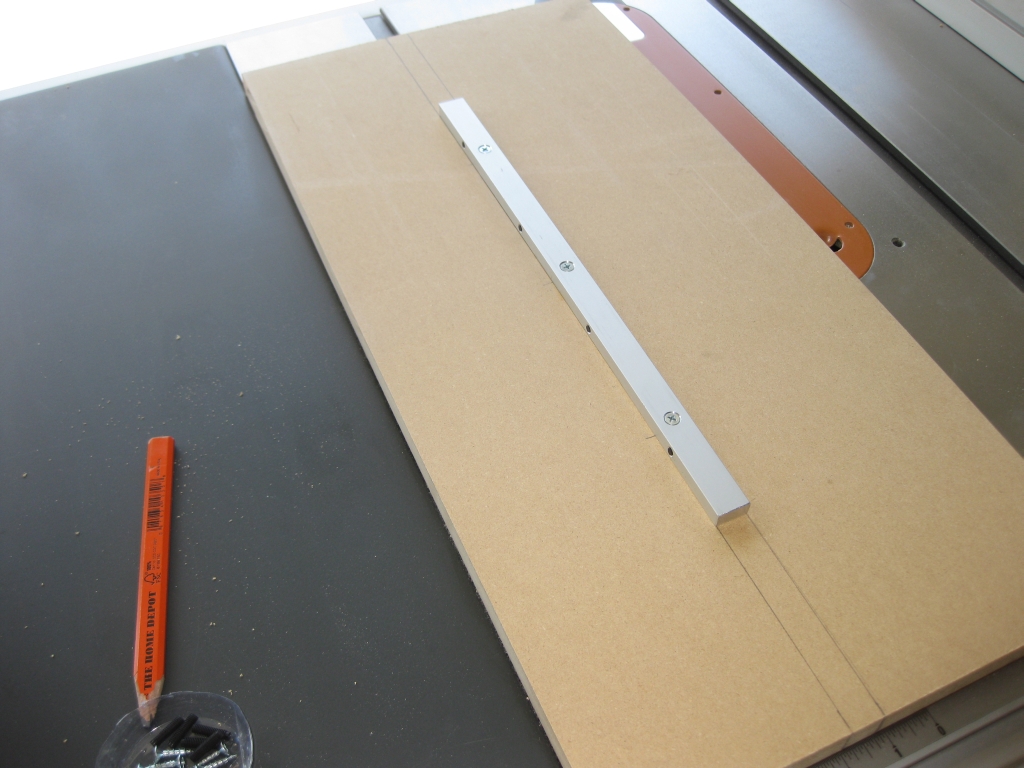 Miter bar attached to the base of the jig

The miter bar that I bought has plastic screws that protrude from one side to ensure that the bar is a perfect for for the slot. Taking some time I adjusted each of the screws to make sure that there was no wobble in the slot, as this would compromise the cut.

Taking Scott’s advice, I also added a UHMW plastic base to the cut side of the jig to back up the cut and help prevent tearout. Using blue tape I secured the plastic to the base, and marked out the positions for the screws, predrilled, countersunk then screwed the plate down. The Blue tape came in really handy as it’s almost impossible to mark the UHMW plastic with a pencil. 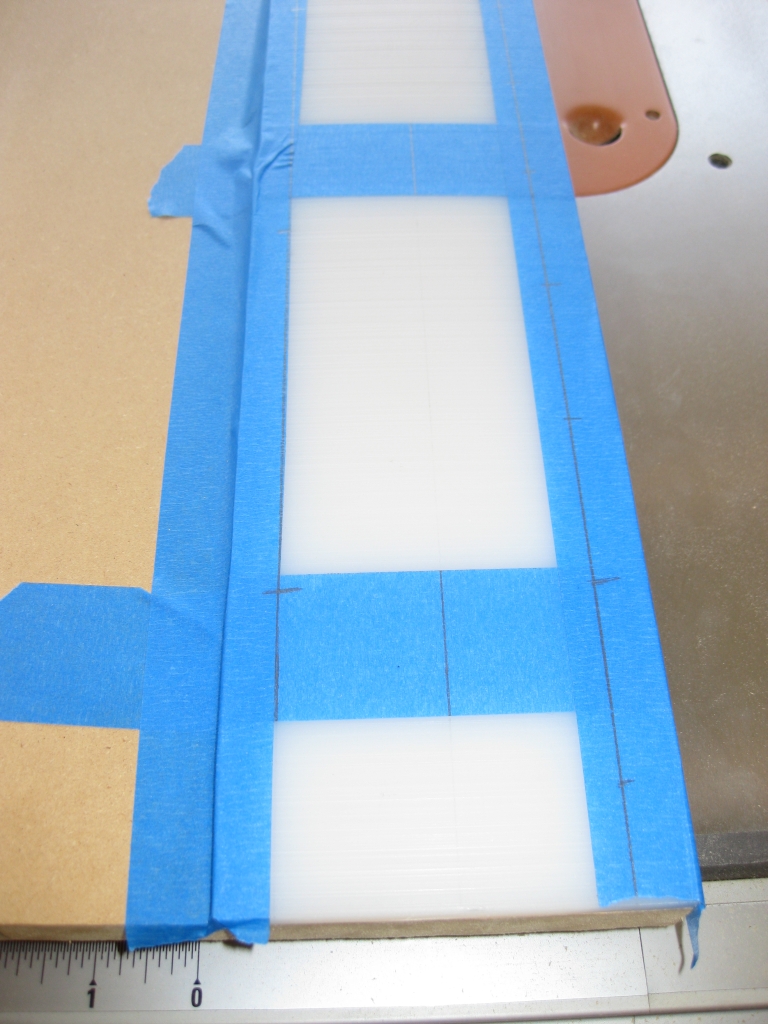 UHMW plastic set in place ready for drilling and screwing 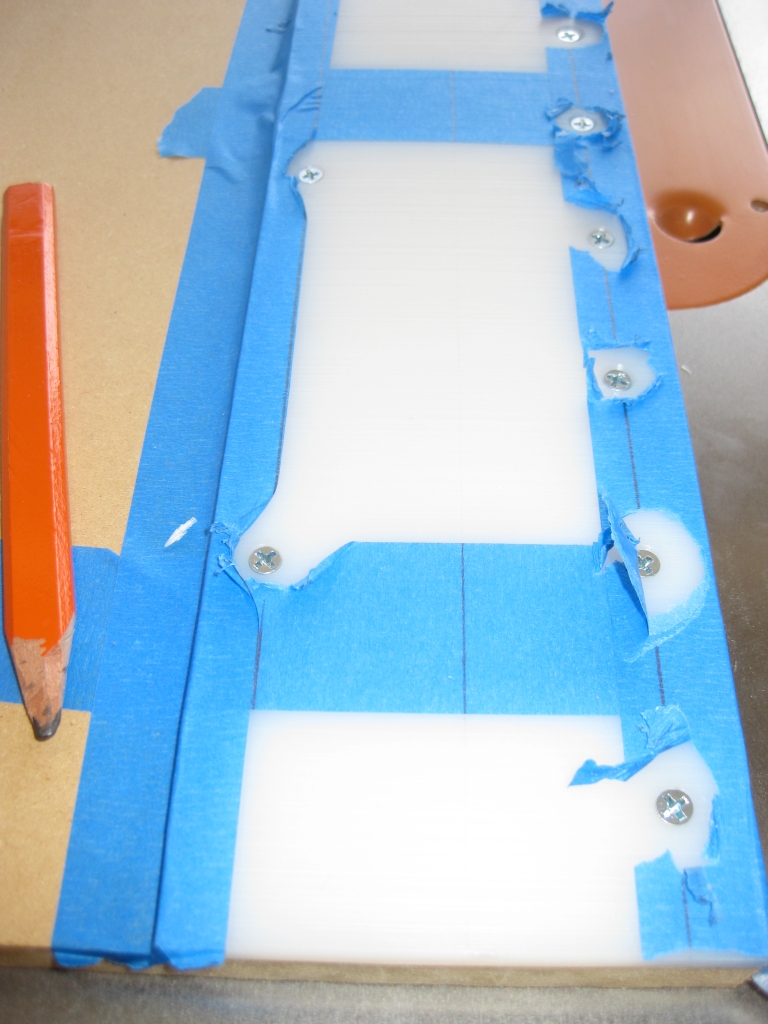 The UHMW screwed down. Note the screws are all below the surface of the plastic

With that done, It was time to make the first cut, and trim the extra material that I had left off the edge of the jig, ensuring that the blade ran along the edge of the jig which is needed for an accurate cut. Making sure that the blade was at 90 degrees to the table top, I made the first cut. And immediately noticed that there was a gap at the front of the jig which wasn’t there at the back. It was pretty small, but enough that I could see light between the blade and the jig, so I knew the jig wasn’t good enough. It seems that I didn’t do a good enough job of adjusting the miter bar, so I readjusted, and remade the cut. Fortunately, I’d left enough space between the edge of the jig and the screws holding the UHMW plastic down to be able to do this. This time things were much better and I got the accurate cut I was looking for. 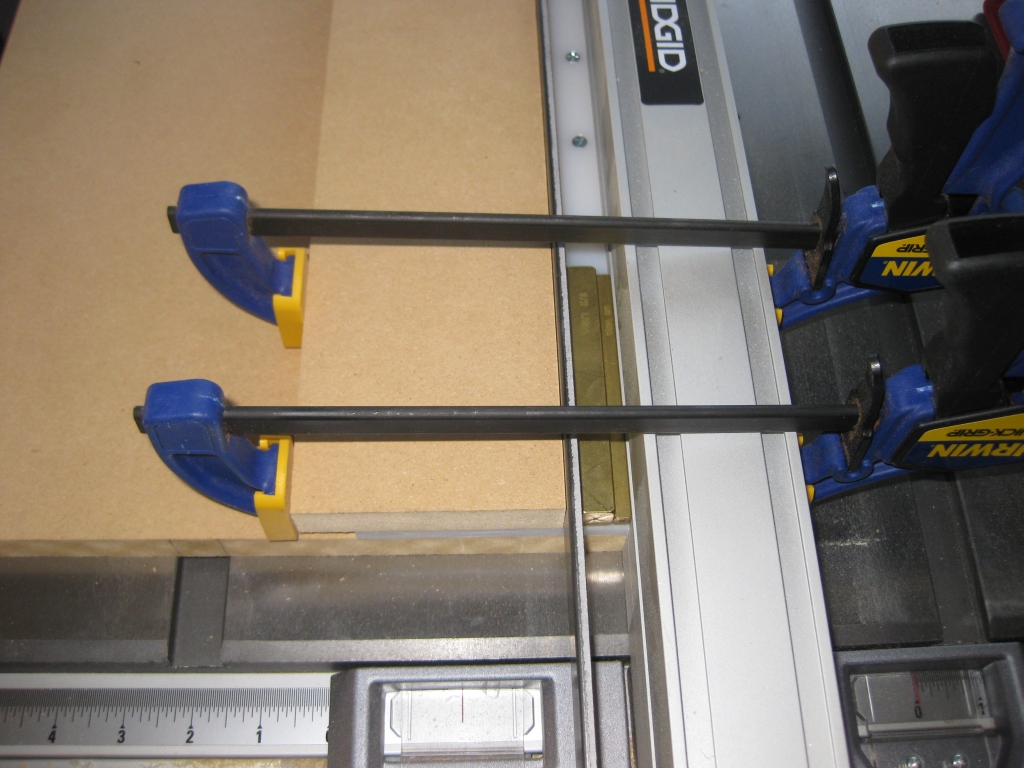 Ready to screw the fence to the jig

The magnets to hold the steel bar in place

Next up I need to install the fence on the sled which the stick will be clamped against when making the square sticks. As Scott notes in the tutorial, I have a steel bar as a spacer, and use some brass feeler gauges to get an accurate cut. I also embedded some Neodymium magnets in the fence to hold the steel spacer firmly against the fence. The fence is clamped securely against the saw’s rip fence, then predrilled and screwed down.

Those eagle eyed readers out there may notice a couple of extra drilled holes in the fence. Well yet again, I managed to get things a bit wrong, and screwed the fence in a little squint. Now that’s not a lot of use when you’re trying to get accurate cuts, so I re-drilled and re-attached the fence. So there’s a couple of extra holes there now. It won’t affect the jig, but a squint fence would have!

Adding some toggle clamps to the fence and I have something where my fingers are well out of the way, and the sticks will be firmly held against the fence. 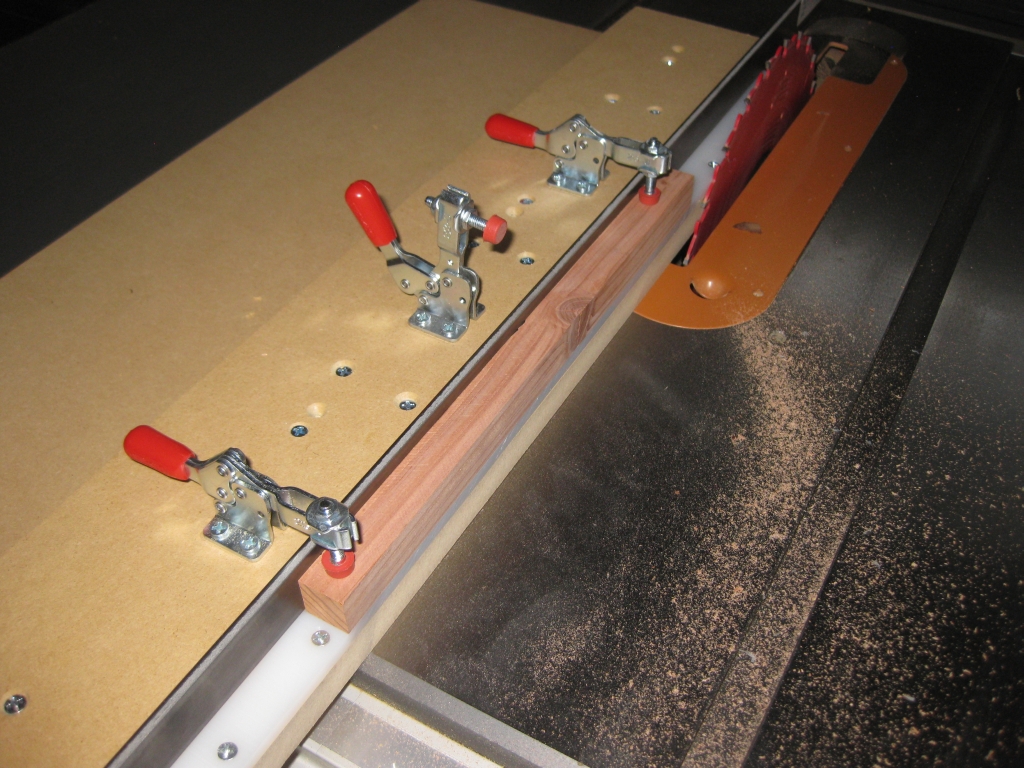 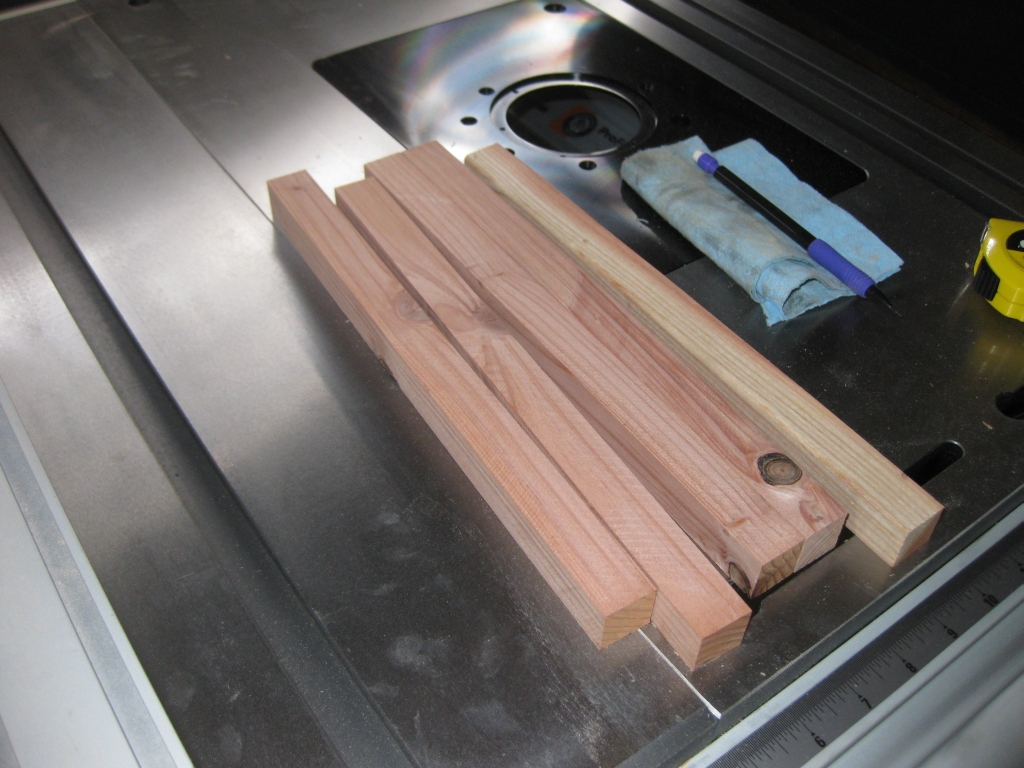 With everything set, It was time to put some sticks in there and see if I could make some square sticks and whether they would be accurate or not. At this point I was looking to test the jig, so I used some redwood I had to spare, and ripped it into roughly sized sticks. Now you’ll notice the knots in the wood so even I knew things weren’t going to be perfect. Still it was good enough for a test.

Measuring the sticks using my digital calipers, I am getting sticks with a 0.005″ tolerance between either end of the 12″ sticks. That’s not too shabby. Given the knots in the wood, which will most likely make it twist as the knot is cut, I’m fairly happy with the results. At this stage in my puzzle making career, it should be more than accurate enough for making cube based puzzles, and burrs.

But that’s not the end of the story ….

I came back to the jig in the morning, used some walnut that I had bought a few weeks back for making puzzles, and used that to get some square sticks. The walnut is much nicer wood, no knots, and a beautiful grain to it …. The results. I cut four 9″ long sticks with a tolerence of 0.002″ across all four sticks. Now that’s a result I’m proud of!

Next up, I need to create a crosscut sled so that I can cut these sticks into accurate cubes for use in making puzzles. That post is coming soon, so stay tuned.