Wow, doesn’t time fly. It’s nearly the end of 2012, and I realise that I still haven’t sat down and written up the Tetraxis puzzles that I received from Jane Kostick over a year ago. Worse that that, I created the video review back in October (last year)! Not only that but after being at IPP and playing with more of Jane Kostick’s excellent puzzles, I’ve bought more from her and really need to review that too. So with all the procrastination out of the way, I hope you enjoy the review of this fine puzzle set.

Some time before IPP31 I came across Jane and John Kosticks website, and really liked the look of their puzzles. Digging around a little, I found that as well as the mass produced plastic versions of the puzzles, Jane also made some rather unique versions from wood as well. So chancing my arm, I got in touch and asked if she would make me a set.

Jane and I chatted back and forth for a while via email, and eventually agreed on some woods to use from Jane’s fairly large stock, and she set about making the puzzle pieces for me. I have to admit that I really enjoyed talking with her about the puzzle itself, how the magnets were attached to the sticks, her experiences with different woods, and many other topics, including IPP. In the year that has passed since then I still talk to Jane via email occasionally and on returning from IPP 32 I threw her another email commenting both on the great puzzles that she had in the Design competition, and also a particular puzzle that John Rausch had given me to play with, but more on that later.

Unbeknown to me, fellow puzzler Allard was also having a set of Jane’s sticks made and unlike me he wrote about them in a much more timely fashion. 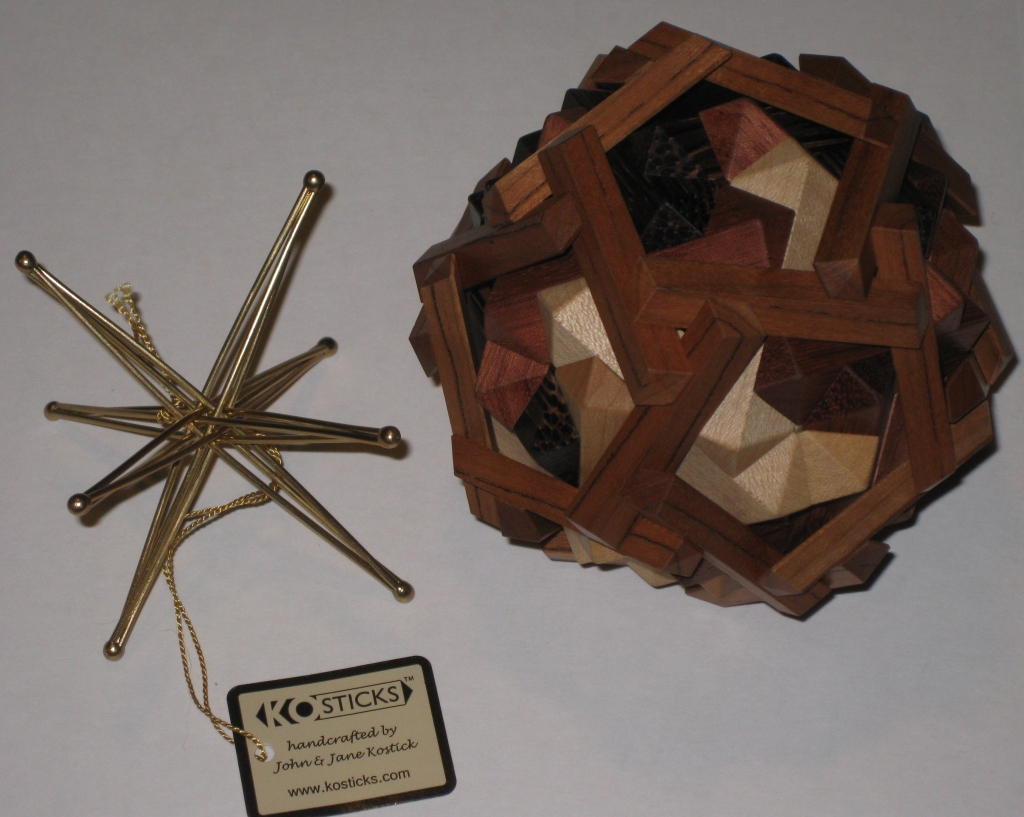 My copy is a three layer puzzle with a rhombic triacontahedron in the centre, then Jane and John’s Six-axis in the middle and a Ten-axis Tetraxis frame on the outside. The inner parts are made from Bubinga, Black Palm and Maple, and the outer Ten-axis is Cherry. They have trademarked the name Tetraxis, and use it to cover all of the puzzles they make including the Tetraxis Star, Tetraxis toy/puzzle, and Tetraxis magnetic sculptures in wood.

The whole structure shows the fantastic geometric relationships that are found in John’s stars and really helps you to visualise the geometry in play. So many puzzles are based on the geometry here, and you’ll probably recognise the shape of the six-axis Tetraxis as the same shape as Stewart Coffin’s Jupiter puzzle (amongst others). 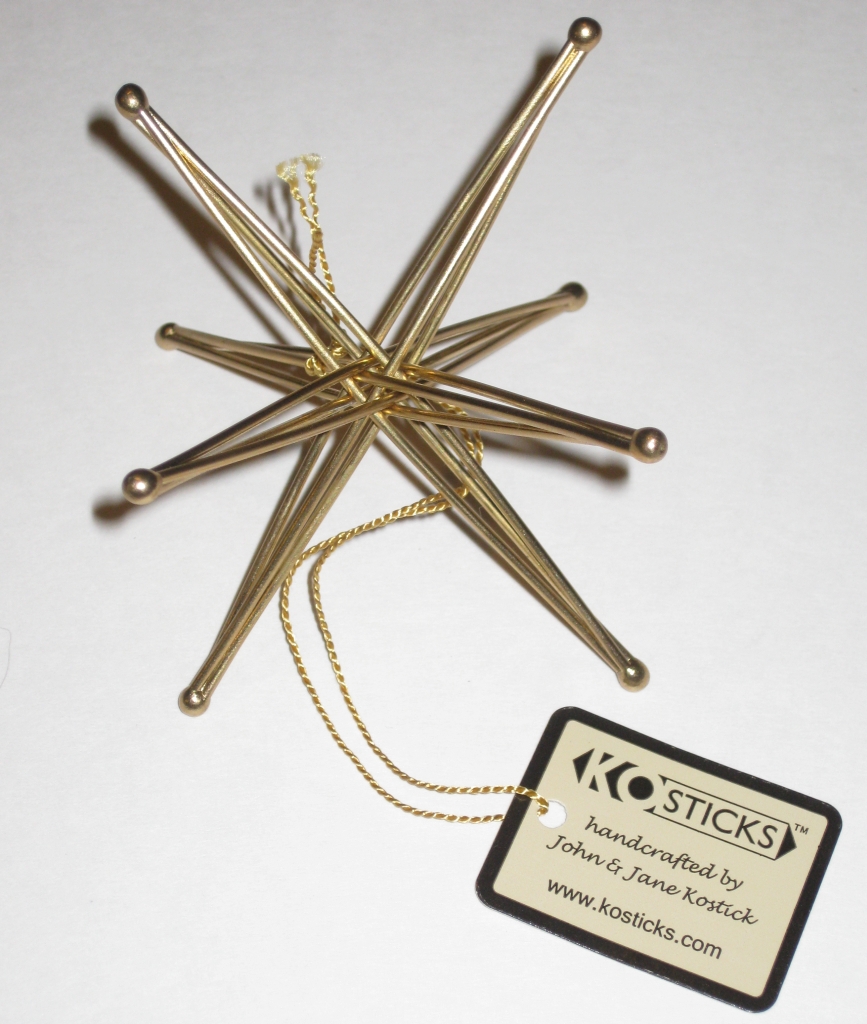 When I originally ordered the puzzle from Jane, things took a little longer than she would have liked due to some dull saw blades, so she ended up sending me one of her husbands Tetraxis stars (4 axis) as a little extra to say sorry for the delay. Now given that this was a custom order I really don’t think it took long at all, and the craftsmanship is superb. To my mind there was no delay and really it wasn’t an issue at all, so thanks for the little extra Jane, it’s beautiful too. 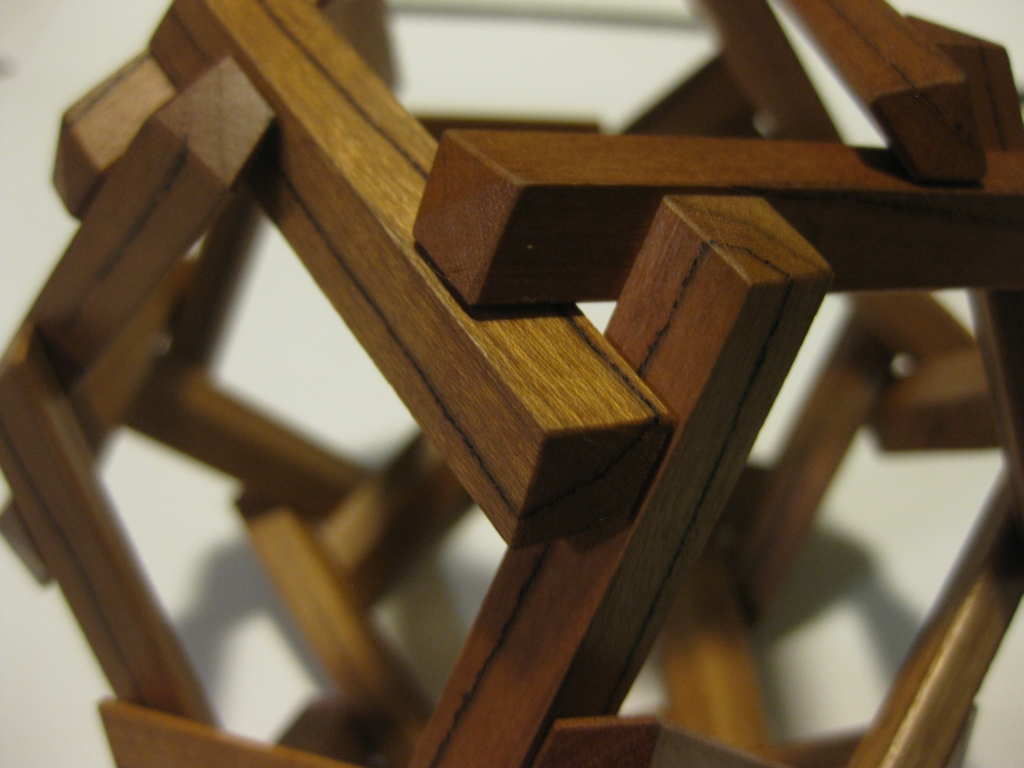 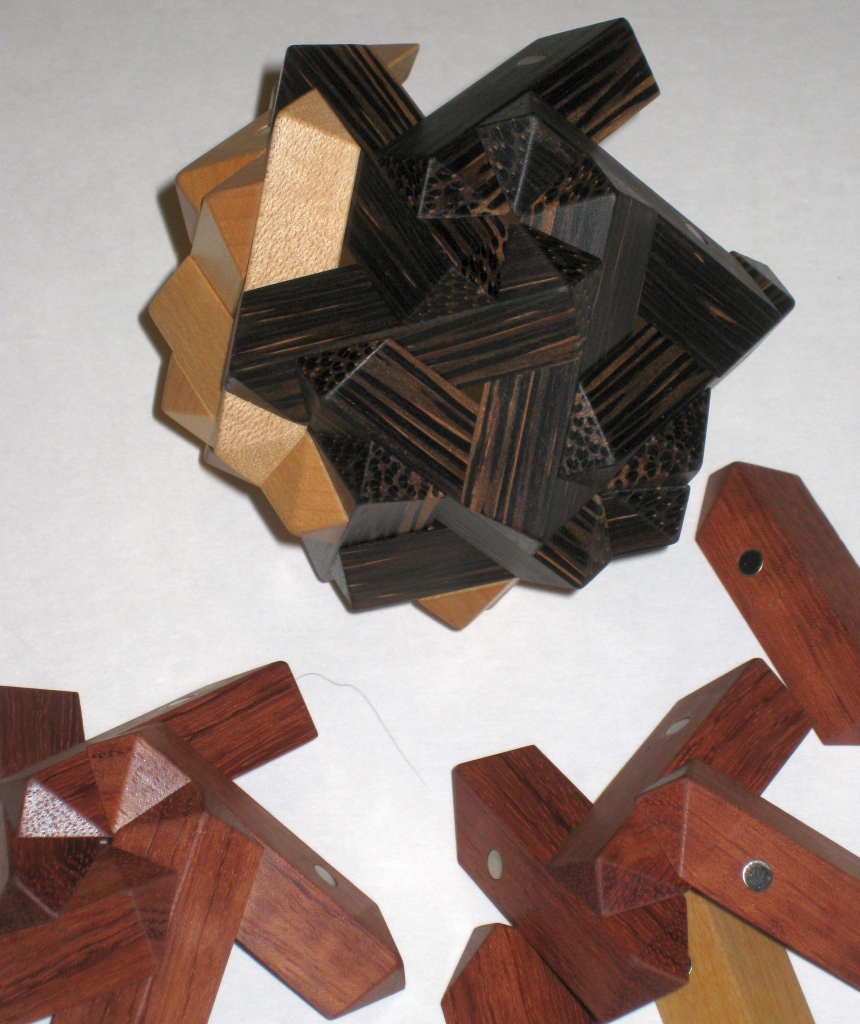 As you can see from the closeup pictures, the fit and finish of the sticks is excellent, and Jane has even signed the pieces which on this scale is no easy task. The overall structure may be fairly large as you can see in the video, measuring 4″ however each stick is just 0.25″ thick on the outer Ten-axis assembly. 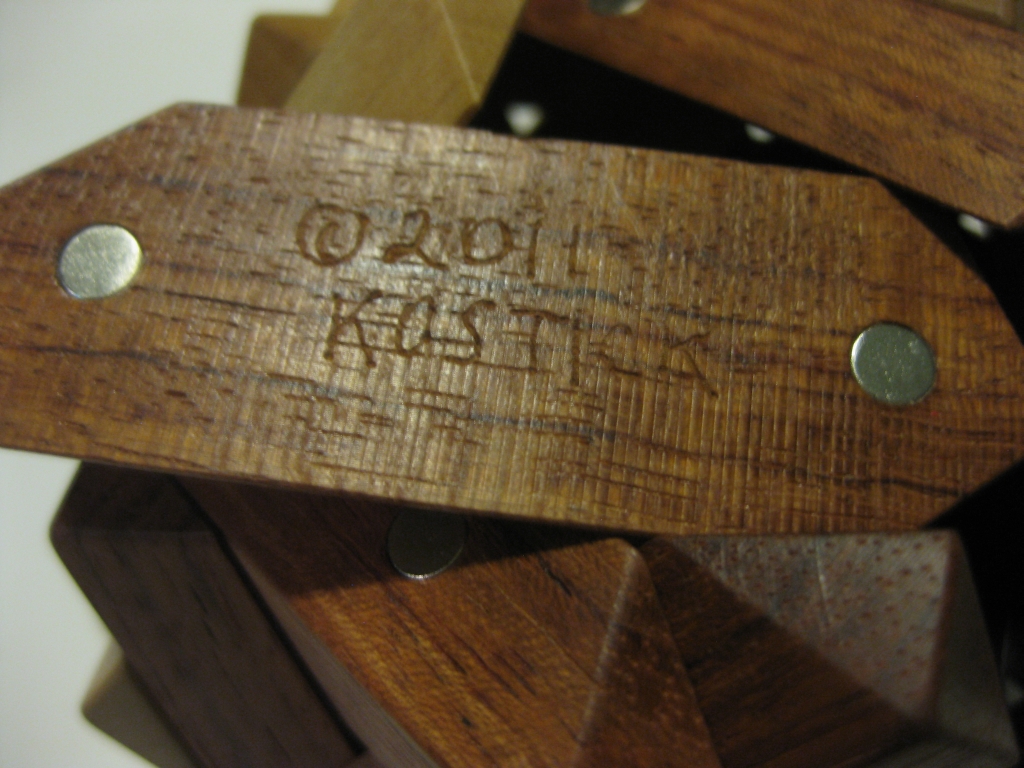 Putting the pieces together isn’t overly challenging, and the magnets pull everything into place nicely so in terms of a challenge, this isn’t the most difficult puzzle you’ll play with, however it is remarkably relaxing to just start putting the pieces together and hear them snap into place. The resulting shape has a sculpture like quality which sits very proudly on my puzzle shelves, and gets a lot of attention from visitors. 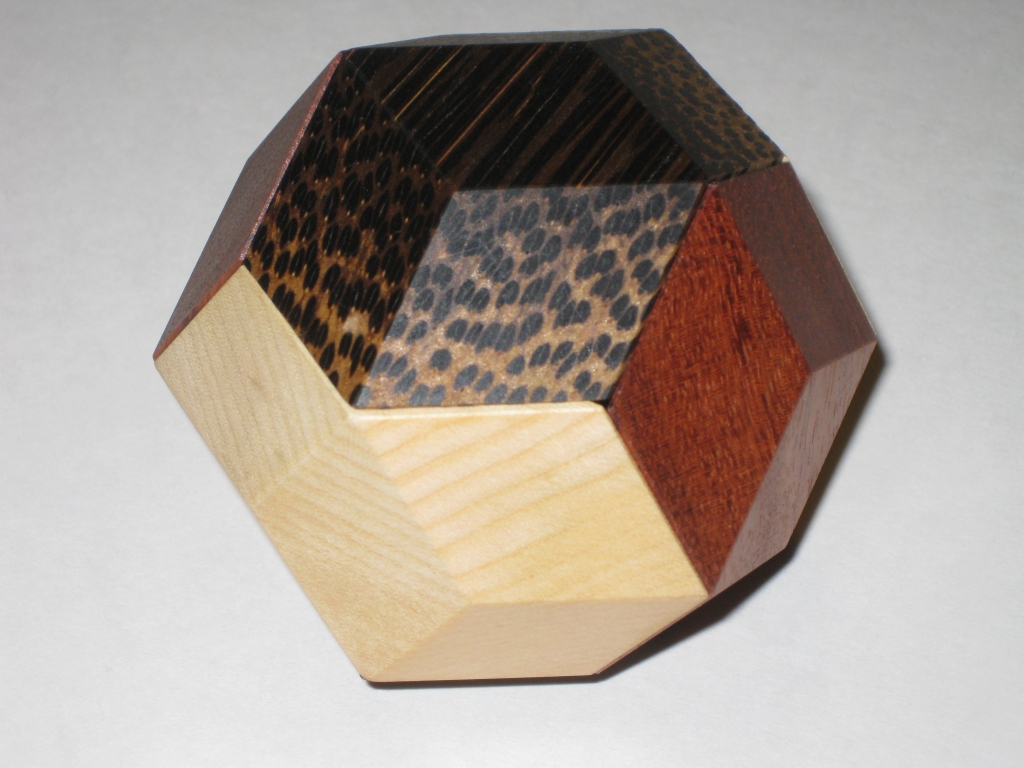 It’s a beautiful puzzle, and truly a work of art. This year at IPP, Jane and John had a number of new designs entered which I was fortunate enough to play with. Not only that but John Rausch had a one off puzzle Jane had made which he handed me to play with. Having talked to Jane about this puzzle after IPP, I now have a copy of that too, so come back tomorrow to read about her IPP entries and a new design that I fell in love with.