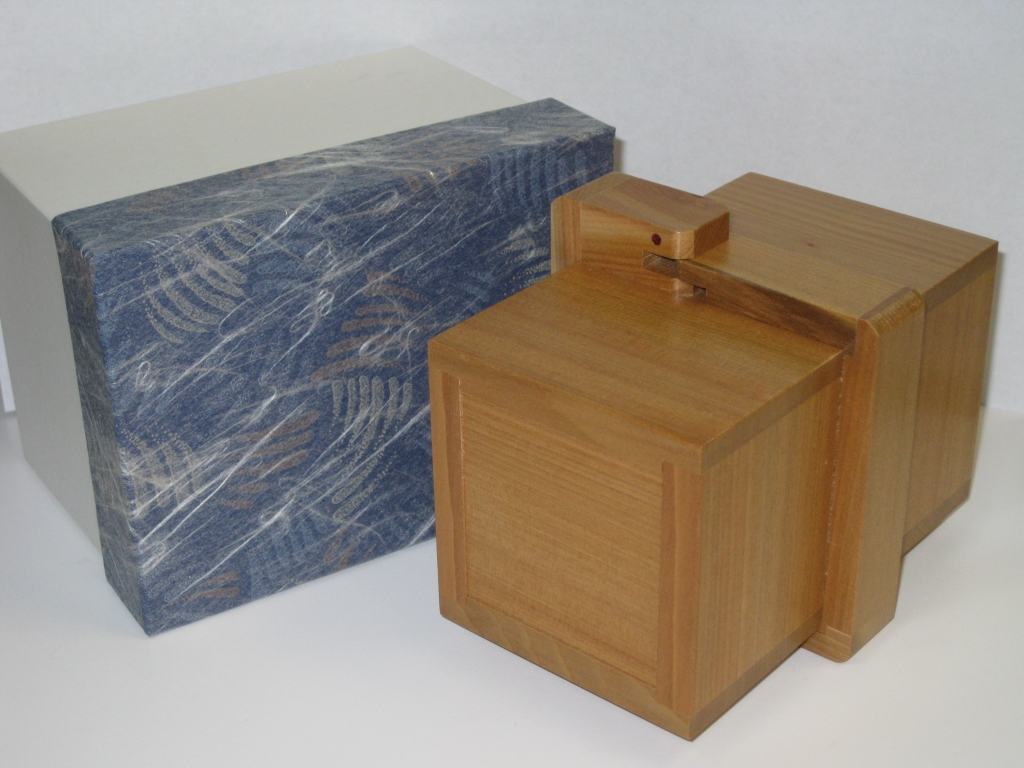 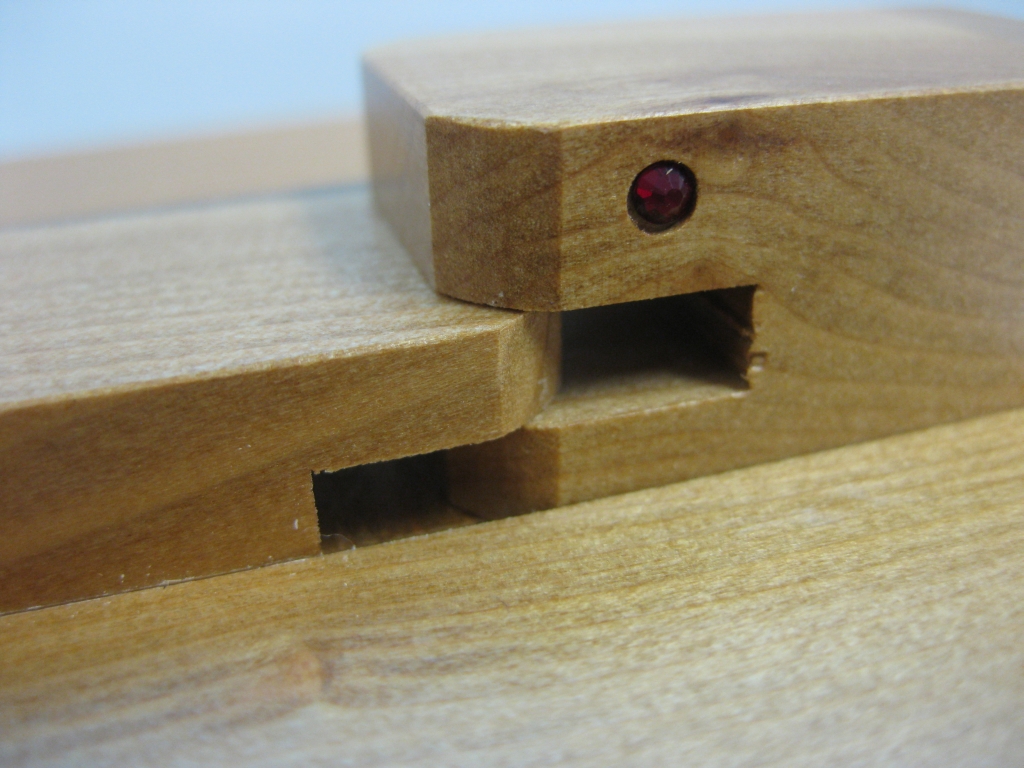 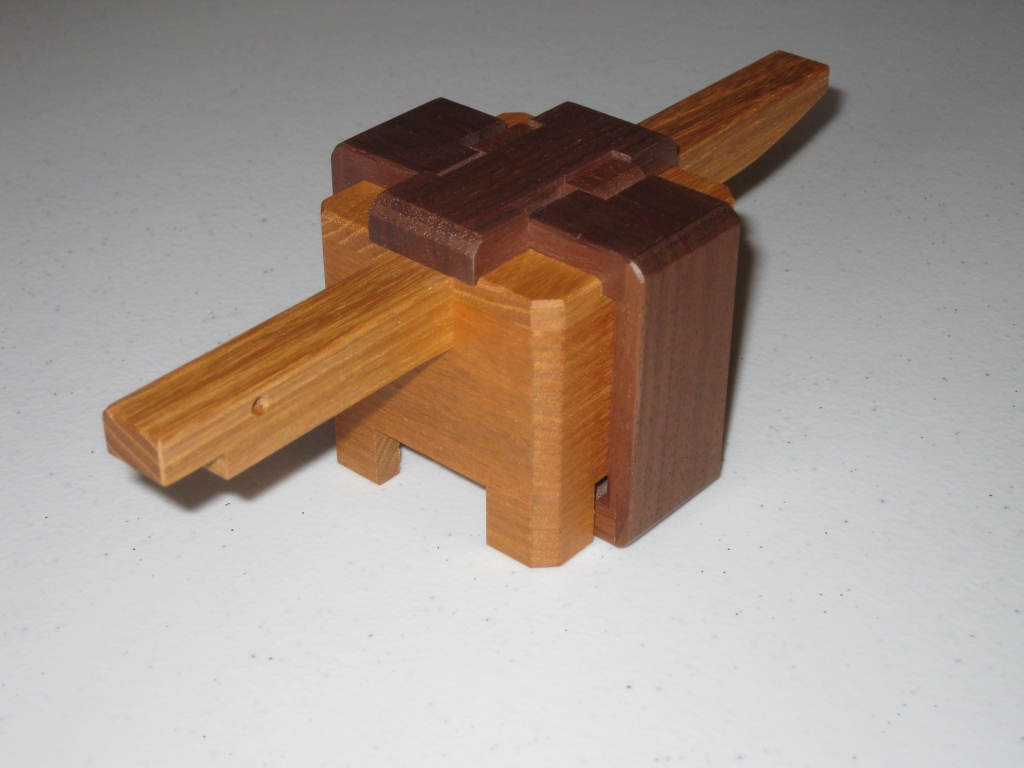 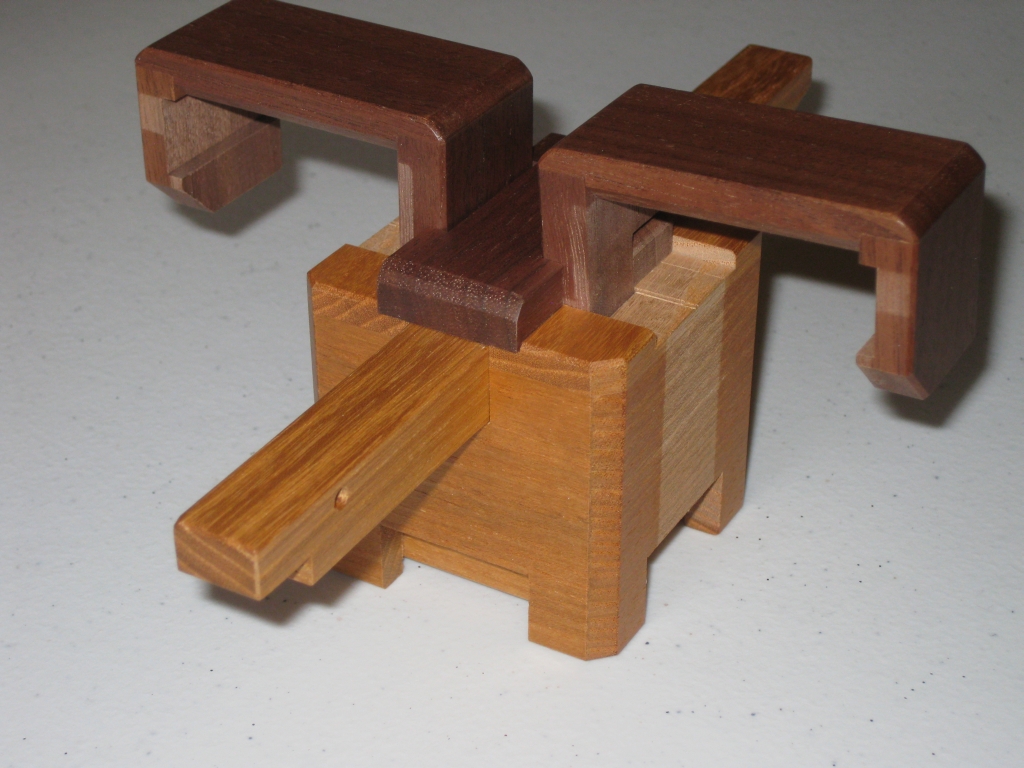 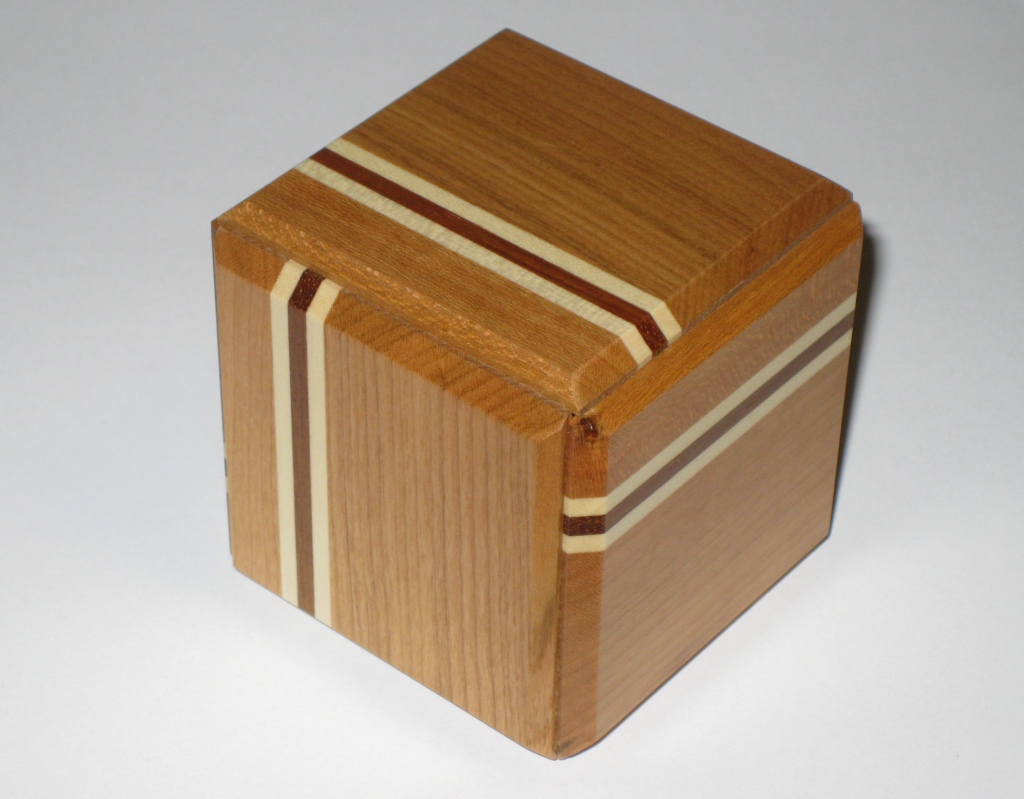 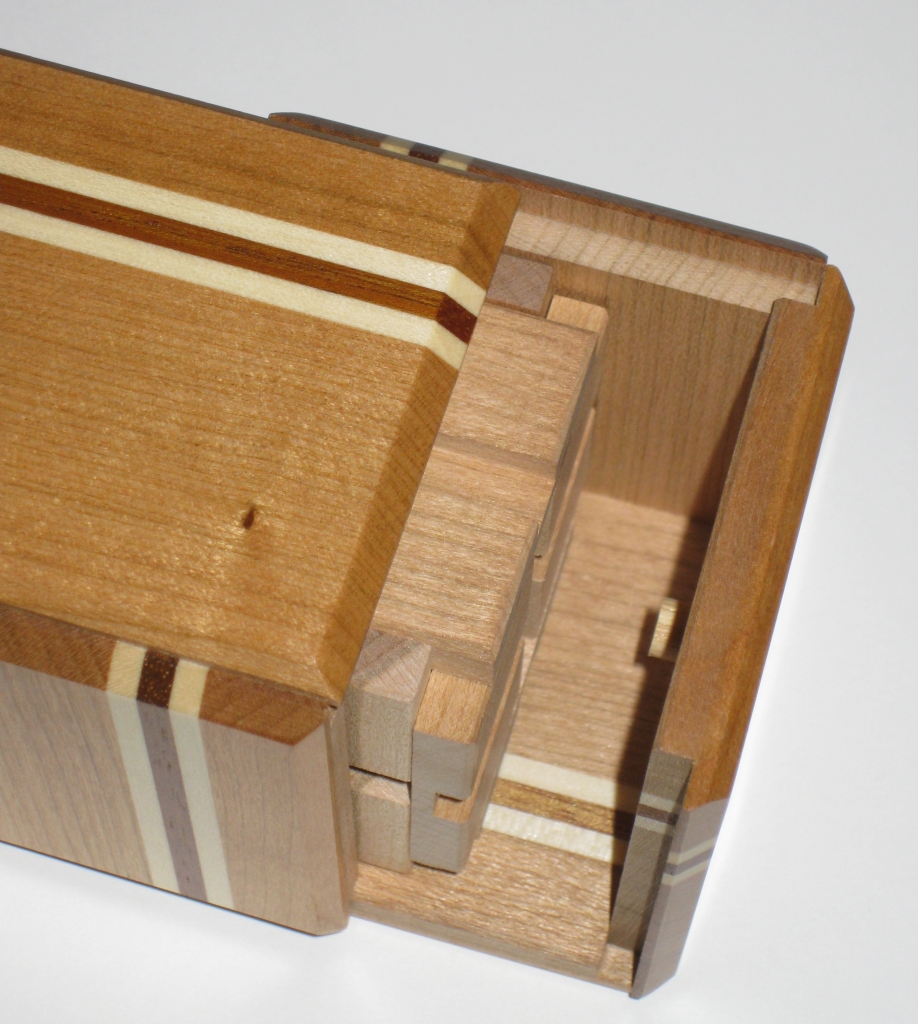 Free Dial by Shiro Tajima was his Karakuri Group Christmas Present in 2005, and is another of the puzzle boxes Derek Bosch recently leant me. 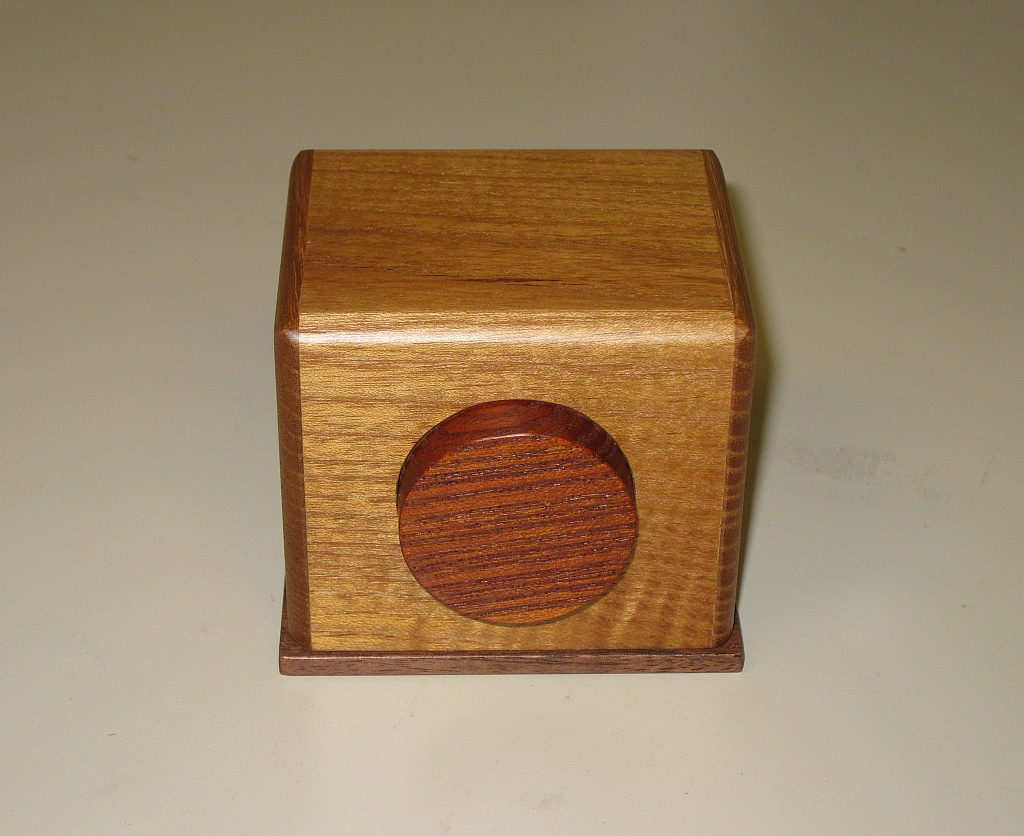 The description of this simple looking box is anything but plain. I love reading the descriptions the designers give their puzzles. So often it reveals either something about the puzzle, or the designer.

Actually in this tiny box is loaded the enchanted power! Try! Let’s turn the red dial in the front of the box. What happened? Probably it will be fantastic things. You might have a romance, might receive a message from somebody that lives far off in the Universe, or…?

Made from Japanese Raisin tree, Chanchin and Walnut, this box measures approximately 2 3/4″ x 2 1/2″ x 2 1/2″. The big red button on the front is fairly appealing, but no matter how hard you push it’s not going to depress. When Derek gave me this box I assumed that the slightly wider plate was the top, however the Shiro Tajima’s page on the Karakuri website shows it as the bottom. Personally, I think I prefer it as the top. 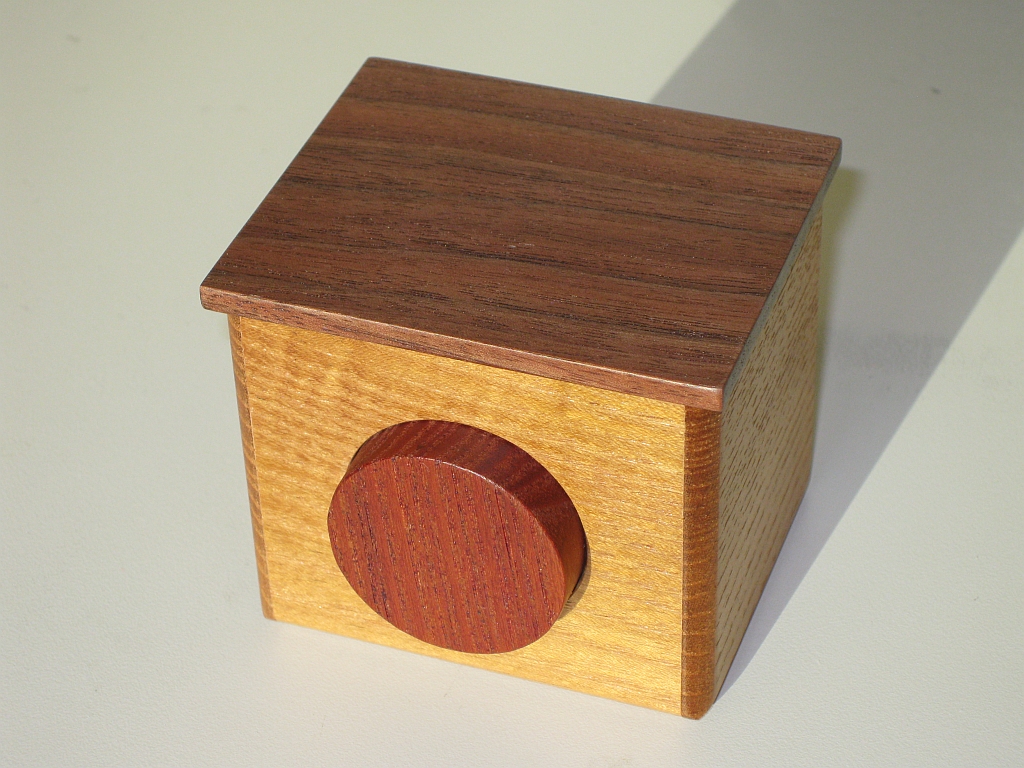 I’m giving nothing away by telling you that the button will spin fairly freely, and that the plate just slides off. There’s no mechanism, no lock, nothing clever here. It just slides right off. 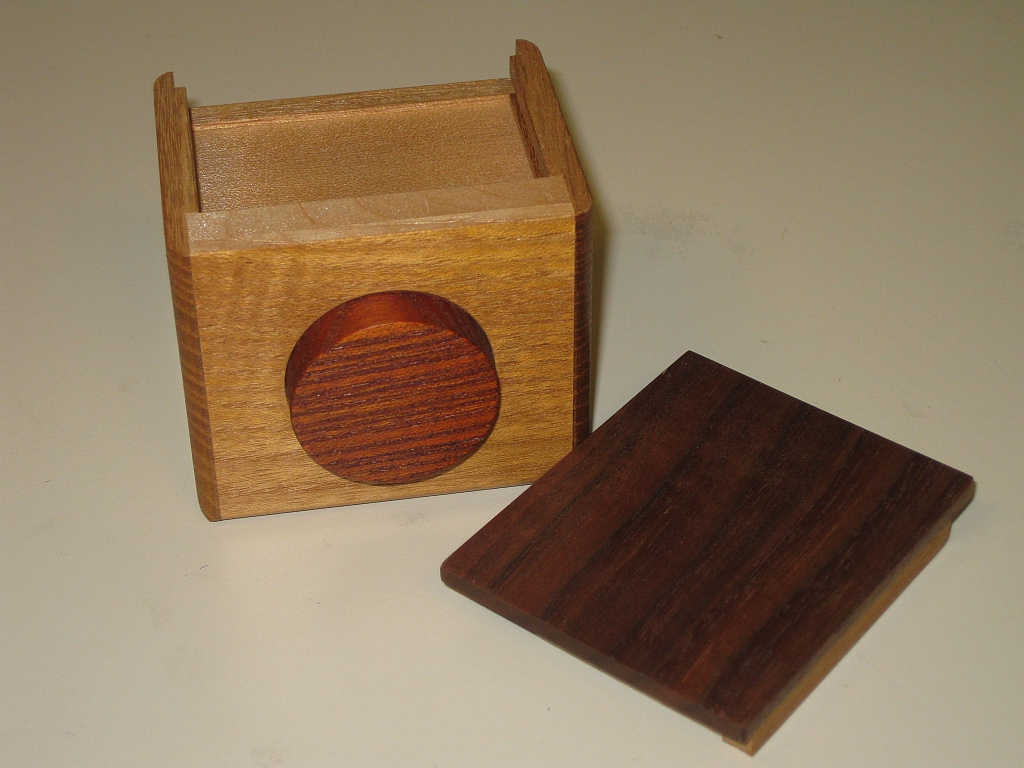 Unfortunately that really doesn’t help much. You’re left looking at a plain top to the box, and you can see the very top of the red dial. After playing on and off with this box, I wasn’t having a huge deal of success. That said, I had a fairly good day of solving puzzles, having finally cracked the Box with a tree so I had picked this back up that night, and in an ‘Aha’ moment, saw how to solve this one. All in all I spent around 30 minutes puzzling over this box.

It’s a beautifully simple puzzle, and as with most puzzles, you have everything you need in your hands to open it, if only you can think enough outside the box to see it. In this case, thinking on top of the box may help as well. The thing I like about this puzzle is that everything is on display. There is nothing hidden, so no clever tricks or hidden mechanisms that you have to feel your way around.

The opening of the box is quite special and rather unexpected. It could easily elude you unless you pay close attention to what you see, and for that reason I really like it. This is a great little puzzle and I highly recommend playing with one if you get the chance. Given that this was a Karakuri Christmas present, there aren’t that many around, but it may appear at auction occasionally, so keep your eyes open.