Laby Box was Hendrik Haak’s IPP31 Exchange puzzle which I was fortunate enough to buy a copy of from Wil Strijbos some time back after I saw it listed in one of his regular puzzle emails. Since it looked a little different to the rest of the puzzles in my collection at the time, and also being a pretty handsome box, I decided to get one. Wil seems to have that effect, as various other puzzlers will attest! 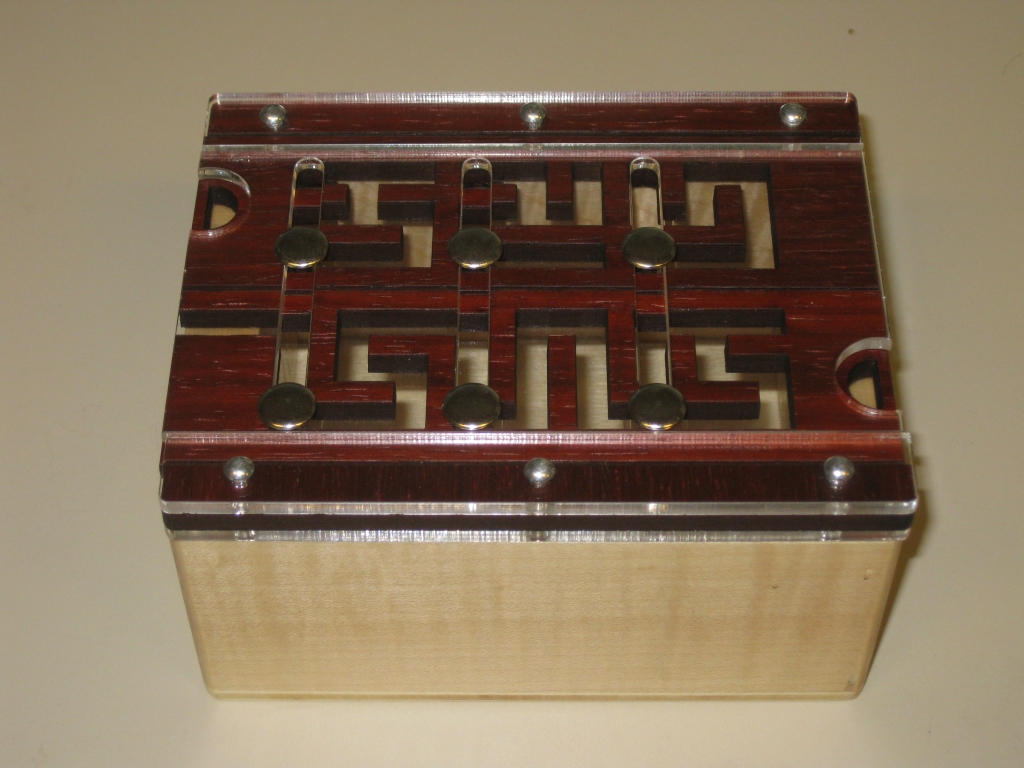 Laby Box in the starting position

Made from Quilted Maple, and what I believe is Paduak for the keys, with perspex to hold the pins and let you see what you’re doing, this laser cut puzzle, really looks great. It’s a step above the quality of many other laser cut wooden puzzles out there in terms of finish and looks, and with 3.5″ x 2.5″ x 2″ as the internal space, and an overall size of 5″ x 4″ x 2.5″, it’s not a small puzzle. The large internal space, would allow you to store some things in there, and given all the open space in the lid, you’d be tantalised with glimpses of what’s inside. The design is superb as everything is on show, there’s no hidden components, so the only thing between you and an open box is your ability to navigate a simple maze (if only it were that easy!)

Allard has also written about this puzzle. Now I don’t normally mention other reviews quite as soon, but here I have a point in doing so. Allard mentions in his review that there’s a hint as to how to start from Hendrik by the holes in the ends of the maze keys, and notes that you’re sent in the wrong direction to start with. Well the first time I solved this one, I found exactly the same as Allard did, I was off in the wrong direction to start. But after resetting, and solving it many more times, I’ve never done the same again. I can easily open and close the lid without starting off in the wrong direction. 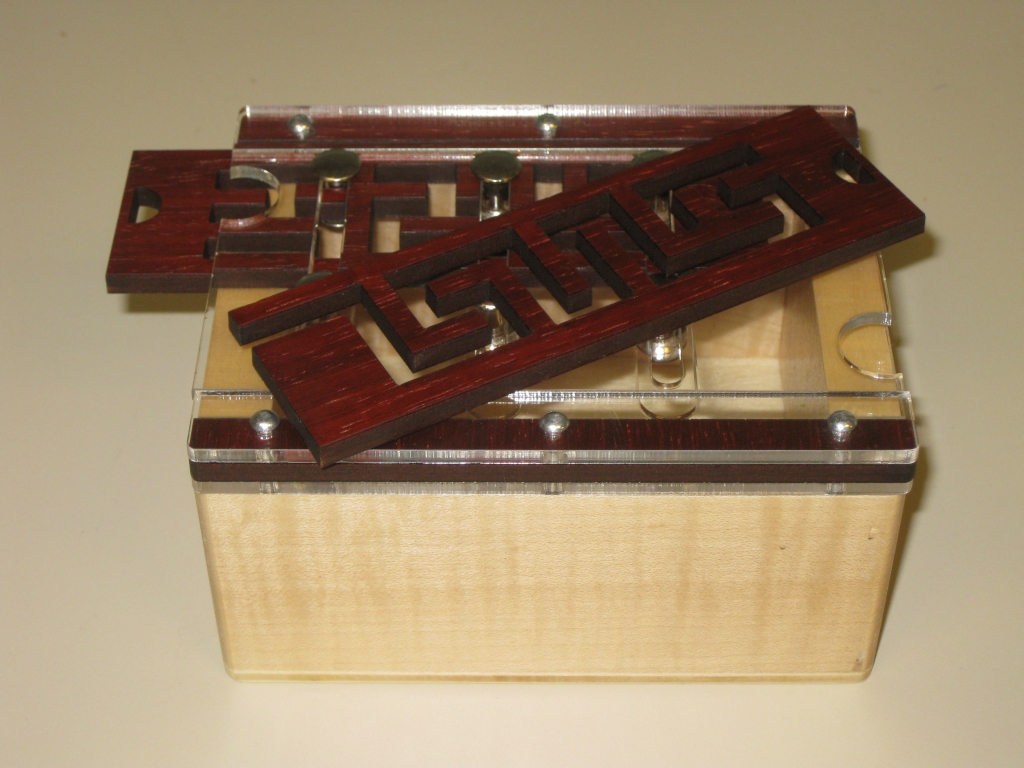 It probably took me around 5 minutes to solve this the first time, but I can now solve it in less than a minute as I know the path that’s needed. One disappointing thing I have found is that the left most pin in my photo, and the corresponding top maze box really doesn’t add much to the puzzle. From the starting position you can quickly move the pin to the top, and slide the bottom key off that pin, and from there on, it never needs to move again as the top and bottom maze grooves give full motion left/right, so it’s use is limited. 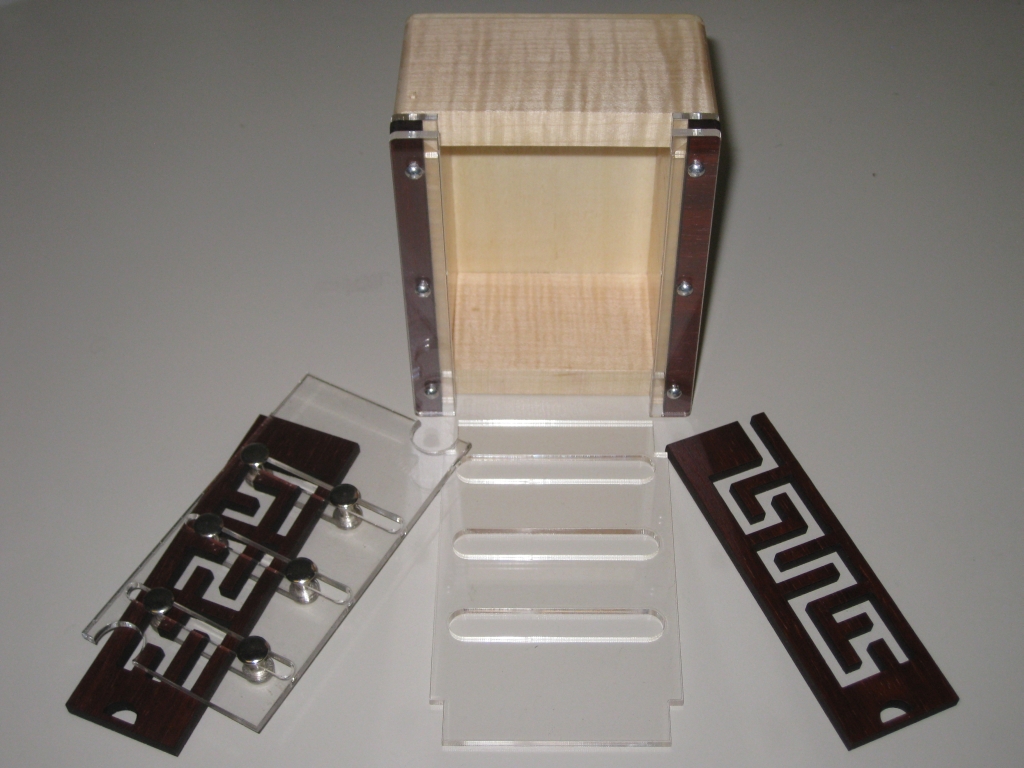 Open, and the pieces separated

Once you’ve removed the bottom maze plate by sliding it all the way off the pins, the top perspex sheet can be lifted off, and the corresponding perspex sheet can be lifted up and slid out of the end, allowing you access to the internal space. It’s a fun puzzle, that may not keep you guessing for too long, but does make you think and observe the interactions between each of the maze sections. It’s a nice puzzle to hand to friends as it’s not too tough, but from my experience tends to make people smile when they get it open, so all round a good puzzling experience.

You can get a copy of Laby Box from Hendrik Haak’s shop, for the very reasonable sum of €35.