At IPP32 in Washington DC, Derek Bosch unveiled his latest puzzle design, the Rhombic Maze Burr or RMB for short, and took names of people who were interested in ordering a copy. I’ve been fortunate enough to have both of his prototypes to play with for the last few months, and it’s about time I let you see them. 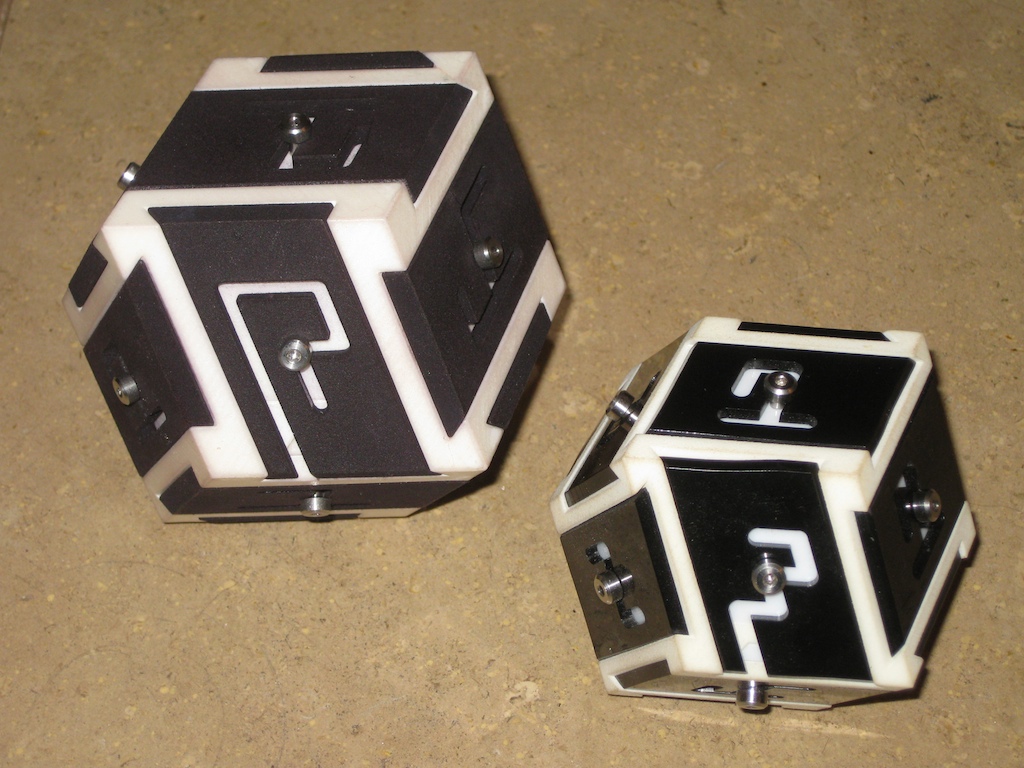 The large and small RMB’s side by side.

If you’re familiar with Kagen Schaefer’s Maze Burr then this might look a little familiar to you. Indeed it’s a very similar design, but Derek has taken it one level further by transforming the frame from a cube into a much more complicated Rhombic frame. That means that the number of moves to open the puzzle can range anywhere up to 350+ moves.

The goal of the puzzle is to slide the plates and work toward removing the plate which has a slot cut to allow it to be removed from the frame. The plates are dual layered, where the top layer moves in one axis, and is connected by a pin to a lower plate which moves in the orthogonal axis. The lower plate has a pin screwed into it which runs in the maze tracks cut into the top plate. As you move the bottom plate, it sticks out through the frame, preventing the adjacent plate from being moved in that direction. To be able to solve it, you often need to think several moves ahead to make sure you don’t block your progress. It’s much simpler than it sounds and the video should show things much more clearly than I can describe them.

With the same set of plates, much like the Maze Burr, the way the plates are arranged changes the number of moves required to solve the puzzle. Initially Derek had two sizes of the puzzle available, the small and large as seen above. Derek was also offering two different materials, having both a fully 3D printed version, and one with Acrylic plates. Add to that a possible option to change the colours to whatever combination you wanted, and it’s an attractive offer. The large puzzle measures around 4″ at it’s widest, and the small is around 3″. Both are a good size however I’d say given that I have reasonably large hands I prefer the larger size.

Having been able to play for a while I can say that both versions work exactly the same, so the size doesn’t change anything. With the larger fully 3D printed version, the friction between the plates initially was making it a challenge to slide them, however as the plates rub past each other they quickly become much smoother and I didn’t find it to be a problem. Given that I was the first person to really play with this copy, I had some breaking in to do. In some regards it may have been helpful since Derek had configured the larger maze in one of it’s harder configurations so when I found a stiffer plate it tended to mean I was moving in the right direction. With over 300 moves (assuming I didn’t backtrack) it was quite a challenge, but after 4 months of playing I did finally solve it. It’s an epic challenge, but certainly possible. With logical thought and analysis of what needs to be moved, you can continue working in the right direction. 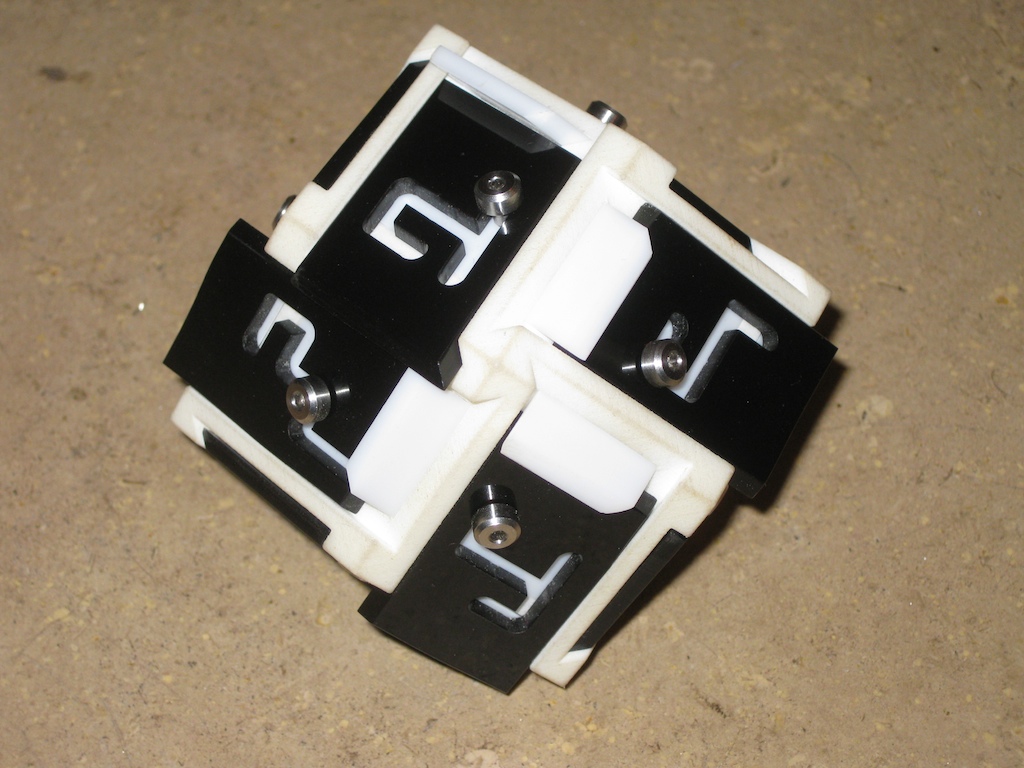 The small version showing how the pieces move.

The smaller version was configured in a much more manageable setting with around 50 moves required, and I was able to solve it in around an hour. Learning from the simpler configuration I was able to apply that to the more complicated setup as the same principles apply. Of course if you get entirely stuck, you can unscrew the pins and always reset the puzzle so you’re not going to be stuck. 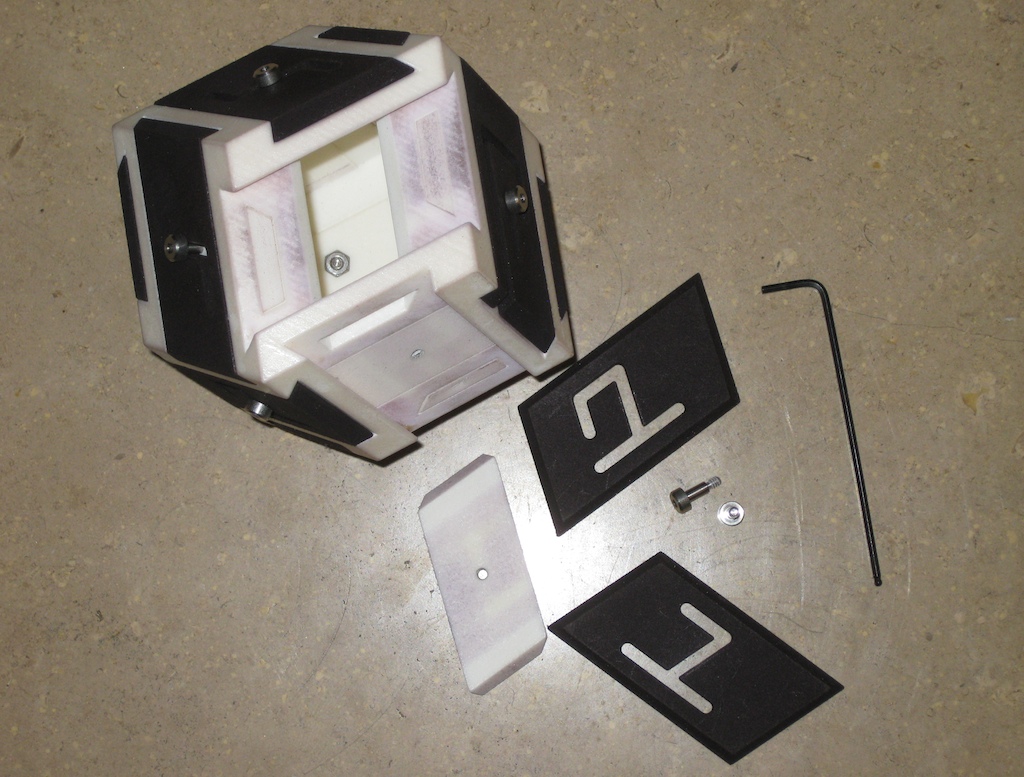 The large RMB with two plates removed to be reconfigured.

Since Derek gave me these versions to play with, he has been hard at work and is now able to make the mazes scalable, and has also etched letters into the frame and maze plates to make it much simpler to describe how to configure a particular maze. These modifications will be available when the puzzle goes into production later this year. The puzzle will come with a booklet containing around 50 configurations for the puzzle, and I know Derek has done analysis with 5 additional exit plates although there are no plans at this point to include the additional exit plates. The puzzle has been computer analysed producing 20 Terabytes of data so I can assure you there is no shortage of configurations to keep you busy!

One thing to note is that as you can see, with the Shapeways 3D printed frames the white discolours reasonably quickly and can end up looking quite dingy. One option is to dye the frame a darker colour which should help. Derek has also hinted to me that he may offer a DIY version of the puzzle which would be cheaper, but there’s no details about what that would be at this point.

From the photograph above showing how to reconfigure the plates, you can see that the puzzle is hollow, so there is empty space inside, however the opening to that inner space is rather small.

If you’re interested in a copy of Derek’s RMB, then let me know and I can pass on Derek’s details to you.