The series of Moeraki games are produced by Kasimir Landowski, and are a series of sliding tile puzzles, where the object is to scramble the pieces then return them to their unscrambled state. The Moeraki 3 and 4 puzzles can be purchased from Casland Games along with versions 1-5 in electronic format.

In an interesting story, Ivan Moscovich created the same puzzles and patented their design in the US in 1985 (US patent No.4,509,756) and were licensed to Meffert Novelties in 1983. The digital versions were licensed to Sony-Online. Shortly after posting my review I was contaced by Ivan requesting that I consider removing my review as a result of the dispute over the puzzle. Since the original review I did for Moeraki 4, and re-posting this today, Ivan and Kasimir have reached an agreement around the puzzles sale and distribution, and I’m pleased to be able to once again restore the review with full consent of both Mr Moscovich and Mr Landowski! 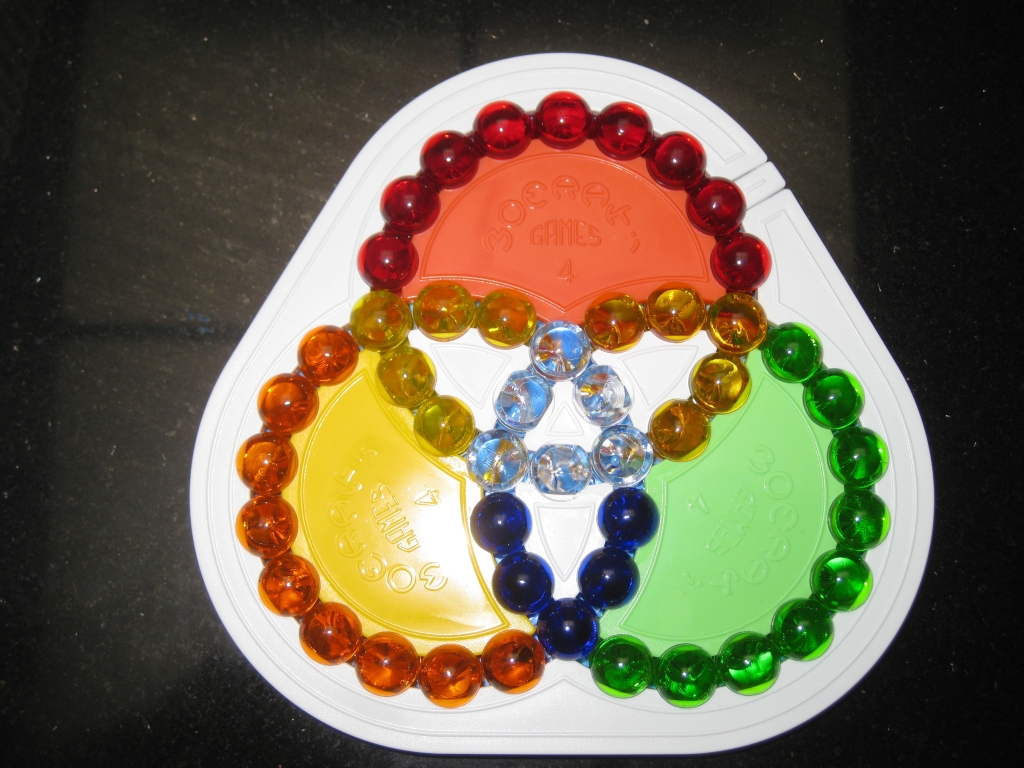 So why Moeraki? The designer happened to stumble across a website on the Moeraki Boulders: round rocks found in New Zealand, near the village of Moeraki on the east coast of the country’s South Island. The rocks are not formed from erosion but were naturally created like pearls and Kasimir thought it suited his puzzle and hence the name.

I ordered both Moeraki 3 and 4, as I like my physical puzzles, however they both come with a PC version of the game included on a CD, so you get both when buying the physical puzzle. Personally I think there’s a lot to be said for being able to physically push the pieces yourself, however it’s a nice bonus, and certainly helps in learning how the pieces interact before messing up such a nice looking arrangement.

Unfortunately, the electronic version is Windows PC only, so if like me you’re a Mac owner you’re out of luck. Fortunately, there is iOS versions available for iPhone/iPad/iPod, including standalone versions of 3 and 4 for $.99 each, and a pack including all 5 for $2.99 which I think is a great deal.

The puzzle itself measures 5.5″ x 5.5″ x 0.75″ and is certainly a well made and solid puzzle. It comes in a clear plastic box wrapped in a cardboard sleeve (entirely in German) which holds both the puzzle, and the CD with the PC version. Sadly mine suffered some rough handling on its way to me and most of the plastic pegs inside the box which hold the puzzle in place had snapped leaving the puzzle free to bounce around inside the box. Fortunately that didn’t damage the puzzle at all, so isn’t a big issue.

The plastic coloured beads have a glass like quality to them and really reflect the light, giving a lot of depth to the rings. The movement of the pieces is incredibly smooth, and each ring is easily turned by pushing lightly on any one bead. The board itself has coloured inner segments which are a guide for returning the puzzle to its solved state once scrambled. Interestingly, there’s no real reason why you should have to do this, as any colour could be placed at any outer section of the rings, and it certainly adds an additional challenge trying to swap the colours to a different starting position.

The playing board consists of three interlinked circles of coloured beads, which intersect at six points, meaning that moving the beads in one circle affects those in one of the other circles. Given the six points of intersection in the three rings, the interaction between rings in this version is higher which adds to the difficulty level. This is even more true when you look at the version I have where the beads in the centre are not all the same colour!

If you have a look on the website, then you’ll see that the version of Moeraki 4 which is available has only four colours instead of the seven seen in my version. That’s thanks to Kasimir sending me a unique hard version rather than the regular version! It is available as an option on the electronic version as a possible combination to play, but clearly Kasimir has read my blog, and knows I like a challenge! Having played around with the puzzle for a while, solving it by ignoring the colours in the centre isn’t too hard, and I can normally solve it from a well shuffled board in around 8 minutes. Solving for all seven colours however is much harder and takes me around double that time. So I’d rate this as a challenging puzzle, but it’s one that you will be able to solve (unlike me and the Rubiks cube).

From playing the electronic version, there are a number of different possible patterns which can be made from the same basic board, including a version where there are only two colours, and each adjacent bead is an alternating colour, and the version on the website where all centre beads are clear, rather than the three extra colours in my version. The board in the puzzle has a plug which has been glued in place during assembly to prevent the beads being removed, however it would be easy enough to make additional beads available when ordering to make these configurations possible, and be able to configure the game board for some of these options. Maybe that option could be available in future versions.

Overall, I think Moeraki 4 is an excellent puzzle, very well made, and a lot of fun to play with. Now I just need to work on improving my time to solve it. I highly recommend picking up a copy from Casland Games or if you’re more of a mobile puzzler, consider the iPad/iPhone/iPad version which is great value, and every bit as challenging. For €20, which includes the PC version, that’s a great price.

I’ll be reviewing the Moeraki 3 soon, but feel free to look at Gabriel’s review until I do.