Cube-16 is another Stewart Coffin design which is an improvement on his earlier design Patio Block (STC#82). Cube-16 is numbered STC#205 in Stewart’s numbering scheme and the goal is to take apart the cube, and then return it to its original state. My copy was made by John Devost, and I was lucky enough to pick up a copy when he recently offered them on Puzzle Paradise. 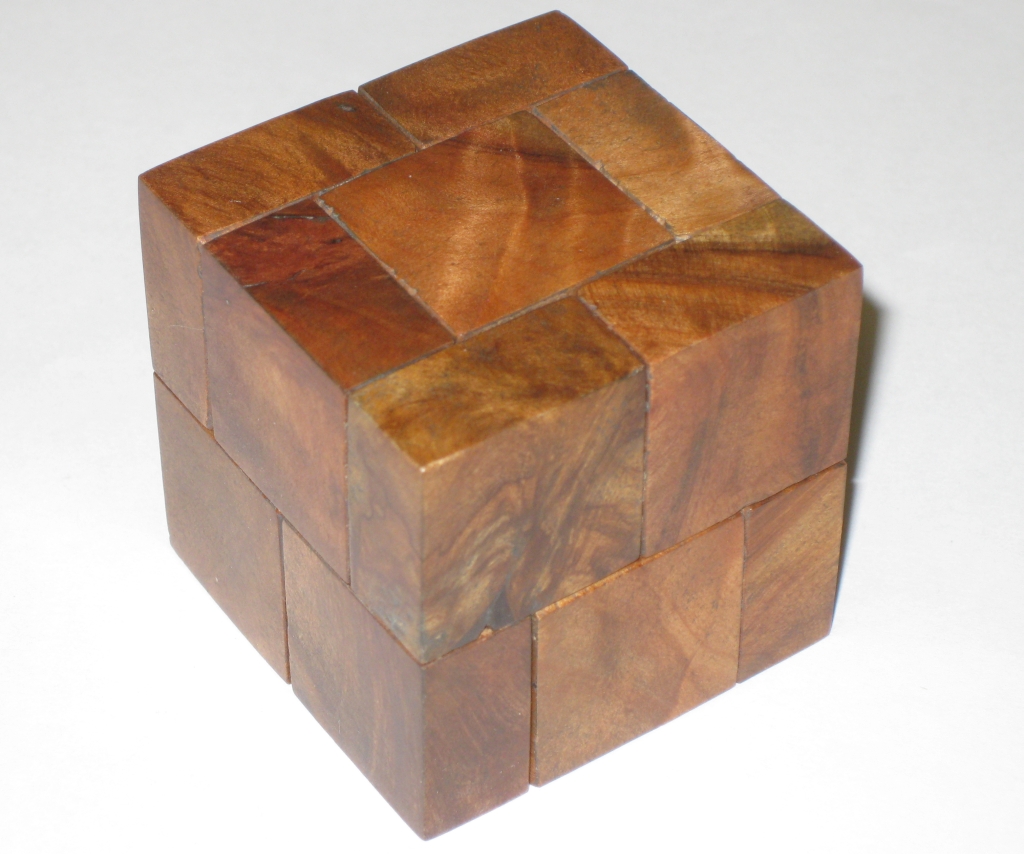 The external appearance of the cube is identical to the earlier Patio Block design so it would be easy to confuse the two until you pick the puzzle up. Patio Block was an eight piece non-interlocking puzzle, so without a box to hold the pieces, it would come apart easily when you tried to move it. Cube-16 on the other hand is a fully interlocking cube, so you can pick it up with no problems. Of course with it being interlocking, finding the first piece to remove can be a challenge.

I’m not aware of too many copies of this puzzle being out there, so when John Devost announced that he’s made a few copies I jumped at the chance. John hadn’t been making wooden puzzles for a long while, and many of us in the puzzle world thought he’d hung up his tools and given up. I’m pleased to say that it looks as though he’s back, and making some great puzzles again. Welcome back John.

The puzzle itself measures just under 2″ x 2″ x 2″, and is made from Afzelia Burl. As you can see, the appearance of this wood is stunning with beautiful waves and swirls and eyes throughout the pieces, but what you can’t see is how the wood smells. This is an amazingly fragrant wood, even after it’s been lacquered and polished by John. I really can’t describe quite how strong it is. The best I can do is to say it’s like walking into a loose leaf tea shop and smelling that sweet aroma. Yes, it’s that strong. The fit on my copy is good. John mentioned that it was a little tight when he had finished making it so he shipped it with a couple of spacers marking the key piece to make sure that I didn’t end up breaking anything trying to find the first move. Hopefully after a little while here in California, it will loosen up nicely and there should be no problems with the fit.

While the Patio Block design was an eight piece puzzle, Cube-16 is a five piece puzzle, but that doesn’t mean to say it’s significantly easier than the original design. I should probably clarify ‘original’ here. Even Stewart’s original Patio Block was inspired by an even earlier puzzle. The inspiration for the Patio Block design was a ten piece puzzle created by Toshiaki Betsumiya, and another similar puzzle which was an eight piece version by Kevin Holmes. All of these designs came out of studies to create 4x4x4 cubes with external symmetry. Stewart took those ideas and created the Patio Block, and later Cube-16.

Each of the five pieces are unique as is the case with many of Stewart’s puzzles which adds to the challenge. That said, I wouldn’t say it’s that hard. I expect that most people will be able to find the solution in around half an hour making it a very approachable puzzle.

I’m glad I was able to get my hands on a copy of this puzzle, and John has suggested that it would be a good design for me to make a few copies of. I may just have to do that, although I doubt I’ll have any wood which will look quite as stunning as the Afzelia Burl.