As I have mentioned previously, I was given a loan of a number of Karakuri puzzle boxes from my friend Derek Bosch. I have been slowly working my way through the puzzles Derek gave me, and this is the next in the series of reviews of those boxes.

Note: This post has been modified from it’s original posting to remove potential spoilers.

In 2009, the Karakuri Creation Group created a series of four small cubes. Each of these had a different opening mechanism, and were all designed to be part of the same affordable series of puzzle boxes as their Small Boxes. 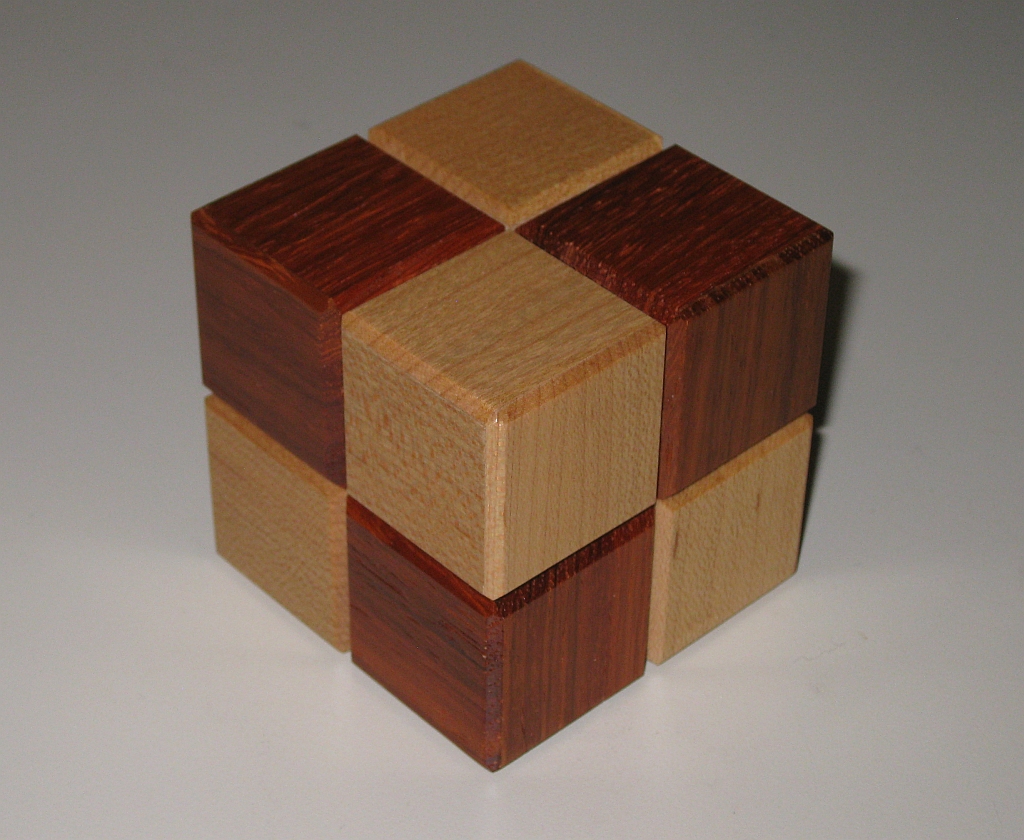 All of the boxes are 2 3/4″ in size, so all fit nicely in the palm of your hand. The boxes are all fairly cheap when it comes to Japanese puzzle boxes, which was another of the groups goals. At around $52 each, while these aren’t the cheapest puzzle boxes you can find, they are very reasonable. Like any of the boxes from the Karakuri group, or any of their craftsmen, the fit and finish of these boxes is excellent. In all honesty, for what you pay for these boxes, you are getting a quality that is far above that of most western manufacturers.

Cube Box #3 is made from Walnut, Maple and Katsura. The Walnut and Maple give the box its contrasting external panels, as is true with the choice of woods on all the Cube boxes. The panels are all well fitted, and to look at the box, there are really no clues as to what could move, or where the mechanism is hidden. For me that is one of the signs of a well made puzzle box. Any loose fit, or gaps tend to give clues as to how to open the box. You’ll not find any such clues here.

Exploring the box and trying to move individual panels, as you may be used to from other puzzle boxes isn’t going to get you far here. As I mentioned each of the mechanisms is different, and often has a twist to it. This is no exception. After around 5 minutes of investigating, I found the secret to this box, and although the mechanism is tight, it moves very smoothly, and reveals the internal chamber easily.

I’ve handed this round to a few friends, and most seem to be able to find the moving parts fairly easily, although even having found the initial move, the final ‘open’ has taken a few people another minute or two to find. For such a simple mechanism, this is well made, and well worth owning.

Cube Box #4 is made from Karin, Maple and Katsura. The wonderful rich red colour from the Karin really stands out against the maple on this box, making it a puzzle which really stands out on a shelf. One of the goals of the Cube boxes was that each box should take no more than 5 moves to open. Even with such a small number of movements, some of the boxes can still be a challenge to open. #4 comes close to the limit requiring 4 moves to open, and has a rather unique final movement.

I really like this box, as despite having a fairly ‘standard’ set of moves to begin opening it, the final move is rather unique. One downside to this is that there really isn’t any internal space in the box. Maybe that is ok, as the puzzle is described as a cube, and not a box. I’ll leave that for you to decide.

Both of these are beautifully made boxes, and with the different mechanisms, and identical external appearance, they are fun to give to friends, as they won’t expect to have such different mechanisms. I highly recommend these if you get a chance to buy them, either from Karakuri directly, or from many other puzzle shops which carry the Karakuri puzzles.