Continuing in my reviews of the Karakuri puzzle boxes my friend Derek Bosch gave me a loan of, is this set of Karakuri Small boxes. I previously reviewed Small box #1 which Robert Yarger kindly sent me when I purchased his Stickman #2 puzzle box from him.

I really enjoyed the first in the Small Box series so I was keen to try to solve these boxes to see where the Karakuri creation group had taken the series. With each box having a unique mechanism, yet all being less than 2″ in size, there’s not a lot of room to be different in there. How wrong can you be. One of the things I love as a puzzler is that I am constantly surprised when I find a clever and almost always simple mechanism which can confuse and elude the solver. These boxes are no exception.

As a note, I have listed these boxes as best I can from the information I have from the Karakuri group. I accept that they may be incorrect. If you have better information, or can verify anything below, please let me know! 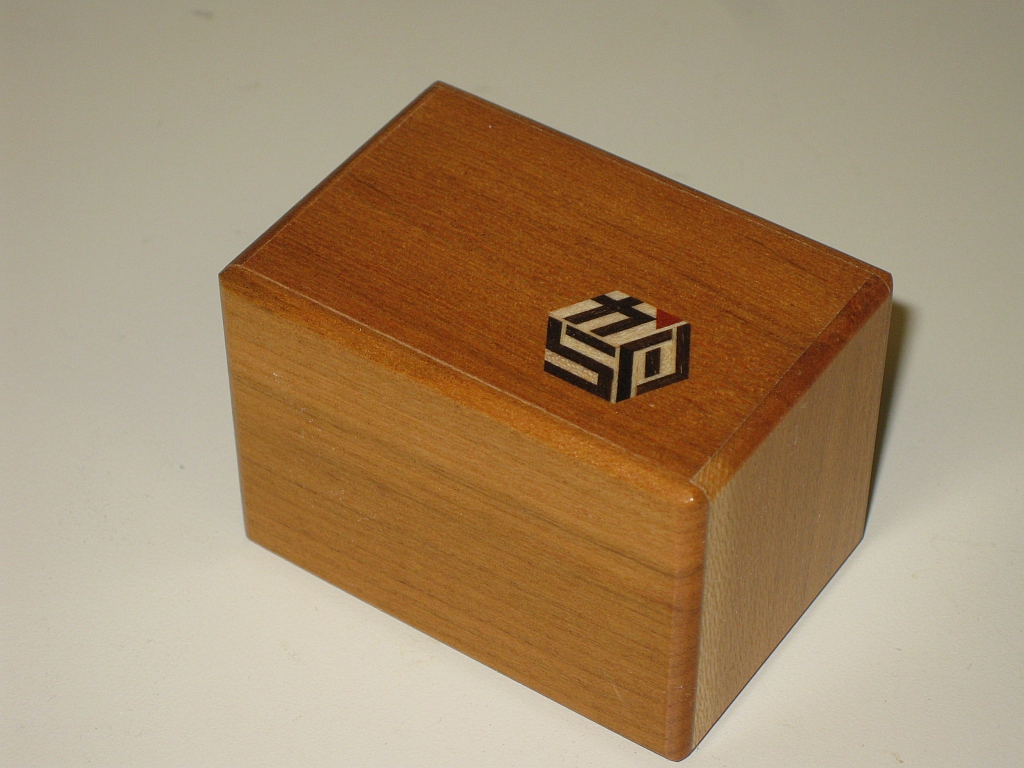 The second box in the series was made back on 2004 and is made from Cherry and Katura. This is listed as KK-2-2, which the same as the original #2, mechanism, just made with a single wood rather than the original box which had a Yosegi pattern on it. There are four versions of this box in total, however the mechanism to open them is the same.

The box itself is the of the usual Karakuri quality that I’ve talked about before. The fit and finish are excellent, adding to the challenge as there’s no obvious mechanism on show. Having tried the usual pushing and pulling on the edges of the box, I wasn’t getting anywhere. So as is always helpful, I tried something different. That turned out to be the key to opening this box. It’s a really simple mechanism, and is executed very well. It’s not my favourite of the series, but still a fun box. Can’t say much more than that without giving anything away. 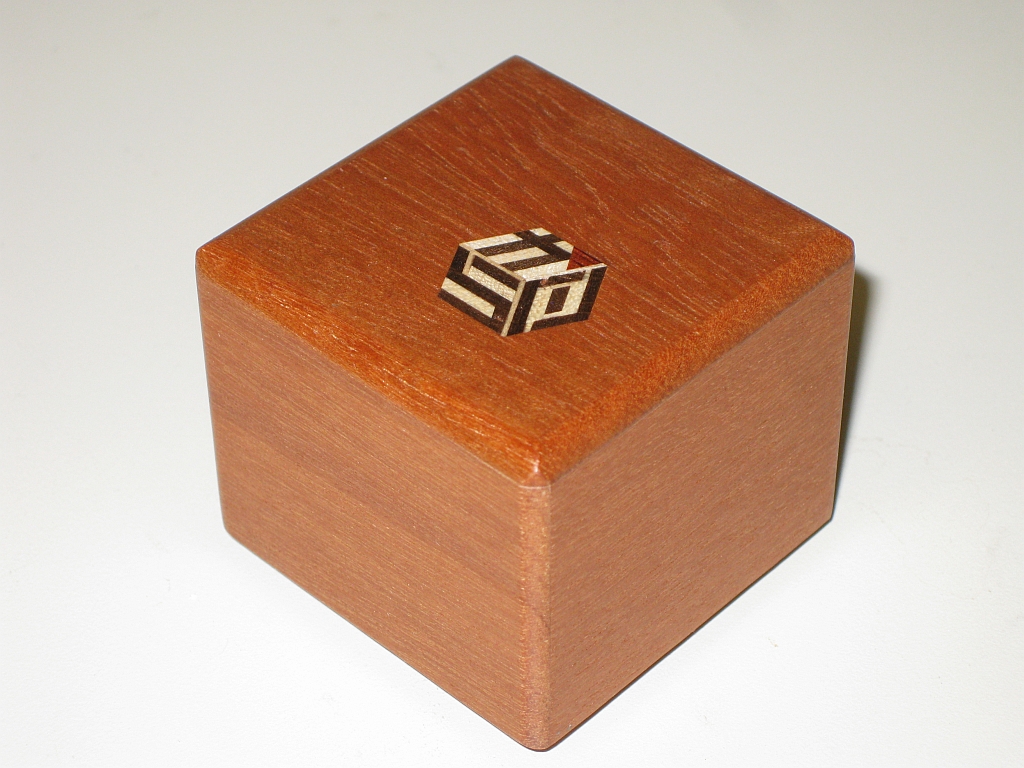 The design of this box (and the next two) is slightly different to the previous boxes, in that it is like a small box with a bigger box ‘hat’. That gives it the appearance of floating when it’s sitting on a table thanks to the shadow cast from the top of the box. In each of these boxes, there is a small gap between the sides of the top and bottom of the box, which will allow the box parts to expand and contract without jamming or splitting. Even with this gap, don’t expect any of the boxes to give up their secrets.

The Karakuri group has this to say about #4: “These creations were all based on Kamei’s old works. “Karakuri Small Box #4” is based on “Box with a Ribbon (P-27)”. It’s a work that is a little unkind.”

The first box in this second generation of small boxes if you will, will be well known to fans of Akio Kamei. It is almost identical to his “Box with a Ribbon” but on a smaller scale, so will hold few surprises for some. I hadn’t previously seen Kamei’s older works so this was new to me.

The description is correct, this box is a little unkind. The only movement to be found initially is that the top and bottom will move around an eighth of an inch. There’s no rattle, to suggest a mechanism, and it seems solidly locked.

As ever with a puzzle box, everything is not as it seems, the answer is simple, and it does not open the way you would expect. In my mind that makes it a good puzzle. If it did what you expected, it would be easy! I spent around 20 minutes over several days playing with this box before I finally opened it . It turned out I had been close for quite some time, but didn’t see how to finish opening it. 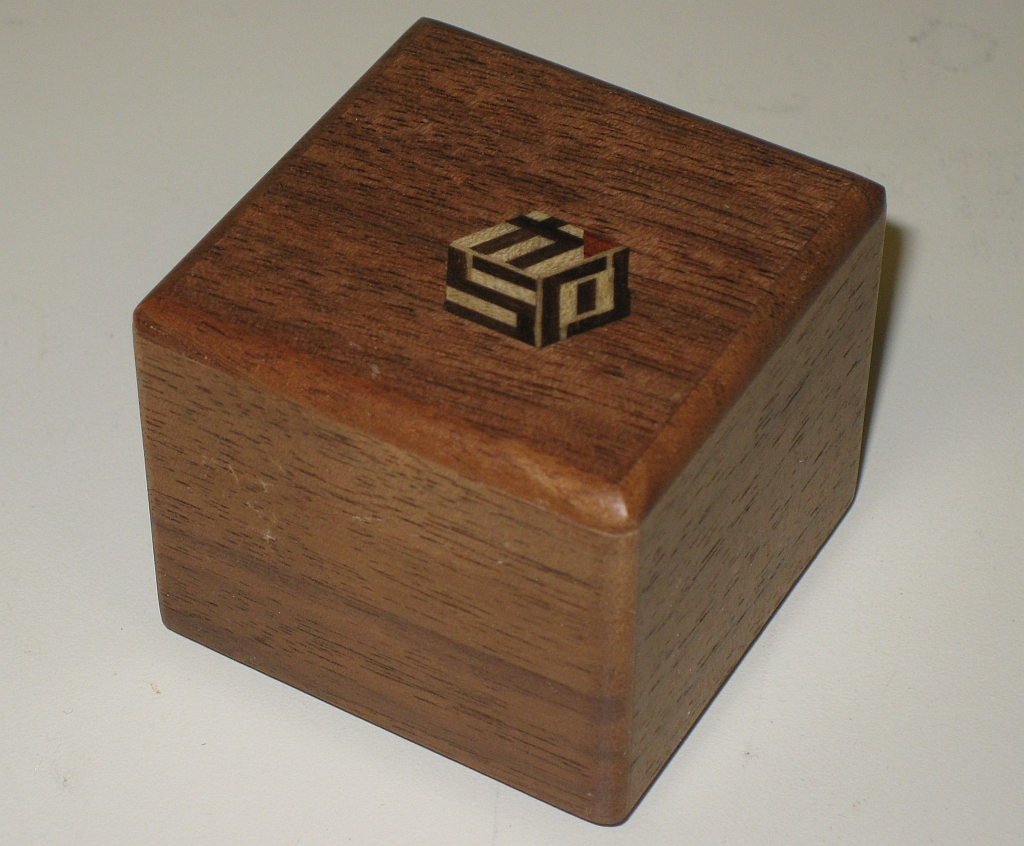 The fifth box in the series came out at the same time in 2005, and is made from Camphor wood. A second edition of this mechanism was made in 2010 from Maple, however the version Derek gave me is a Walnut version. I’ve not found any information about this version from the Karakuri information I have, but from the mechanism, I am convinced it’s a #5.

Almost identical in shape to #4, this has a significant difference to #4. It rattles. For any seasoned puzzle box enthusiast, this is a good clue as to what is going on inside. As I expected, I was right about the mechanism in this box, and opened it on my first try. It’s a fun box, and I really like this despite opening it so quickly. When someone has been stuck trying to solve it for a while, the look on their face when you open it with no effort is priceless.

The image of the opened box below has been taken very carefully to make sure I give nothing away about the mechanism of this box. 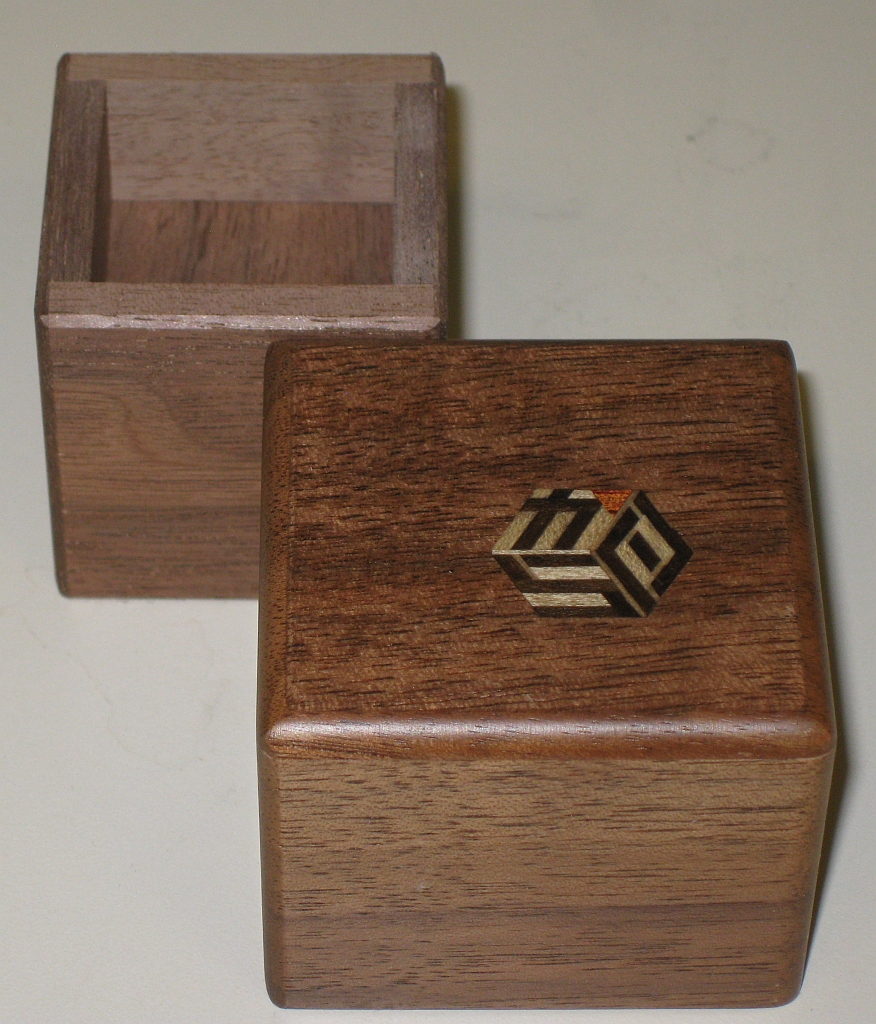 The Karakuri Creation group have this to say about the box “Even though you try to open it “in your hands”, it isn’t easy to open. You may not think you need a desk, but it sincerely is helpful to solve the puzzle.

I hadn’t read the information from the Karakuri website before opening the box, but it did help in identifying which box is which as Derek couldn’t tell me. 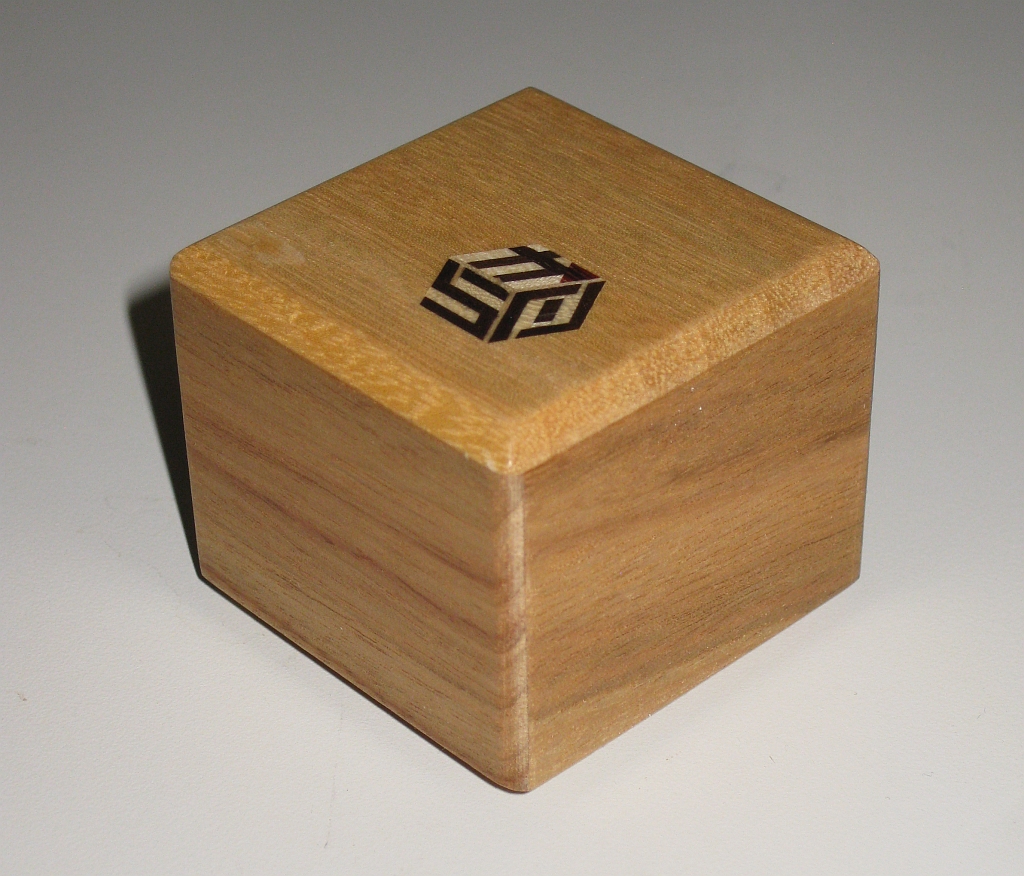 The final box in the series Derek gave me a loan of is #6. Released along with #4 and 5 in 2005, the original is made from Walnut, however the version Derek has is a much lighter wood. I can’t find any information about this version, but I’m pretty sure it’s the right box.

From the Karakuri group comes the following information “People who know the “Top Box” will have already understood the answer. If you don’t know, perhaps it’s difficult to open. Can you imagine the answer from the title? Maybe you need a slight skill to open it, because we made it as a small size work. Maybe you also had better use a desk. If anything, you had better play on the carpet…”

Again I’m not familiar with the Top Box, and this box stumped me for the longest time. It rattles much like #5, but the mechanism isn’t the same. There’s a small amount of play between the base and top the same as the other two, but nothing I did seemed to help in opening the puzzle. When you move the box around, it feels as though there are two marbles locked inside, and if you pull on the base, as you rotate the box, the marbles seem to get stuck until you release the base and they start rolling around again.

This took me a good week to open playing on and off. In all I think it took me about an hour to open this one. Even after opening it, I had little idea how the mechanism works. I really don’t feel like I had an ‘aha’ moment with this one, and as such it’s probably my least favourite of the series that I’ve played with.

If you’re looking for a nice series of puzzle boxes which are affordable and give a good challenge, then I’d definitely recommend the small box series from the Karakuri group. They’re well made and affordable boxes, that look great and could all be used to store small items like a ring. So if you want an interesting way to give that special puzzler a gift within a gift, these would be a great idea. (No hints there to my fiancée at all 😉 )