In a recent sale on Cubic Dissection, Eric Fuller had a number of interesting puzzles available. I missed most of the items there, but did spot the Wunder Puzzle Series. Initially, I purchased only the #2, which was listed as the hardest of the set, but having the puzzle in my hands (and not having solved it after 2 weeks of trying) I realised that was a mistake and ordered the other two puzzles.

The story behind this set of puzzles is an interesting one, but rather than me try to retell it, here’s what Eric has to say about the series.

“I saw a picture on facebook of an interesting variation on the classic joint puzzle…Peter Wiltshire of Canada had scored it on Ebay. I shot him a message and he was kind enough to lend me the original (shown on a white background below) so I could make some copies. When I got it in my hands, I started thinking about various different locking mechanisms that could be used, and decided to make the original plus two very different variations.” 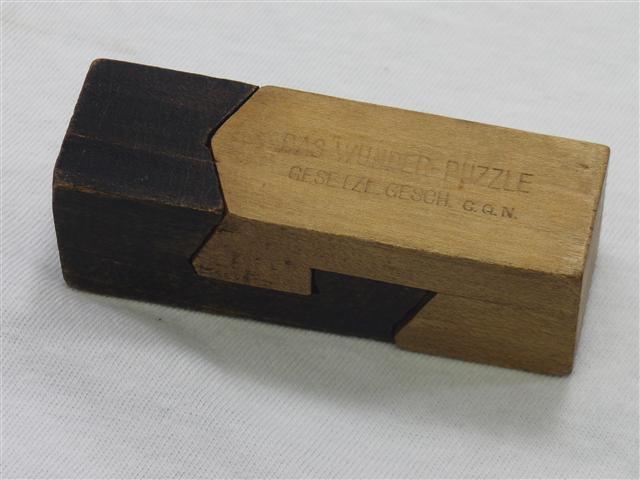 As I mentioned at the start, I had only ordered #2, thinking to myself, I’m an experienced puzzler, I can solve the hardest one. At the time I couldn’t justify all three, so why buy an easy puzzle, right? I’m pretty sure I’m not the only puzzler out there who things like that. (See what Allard has to say in his review given that he did the same as me)

Well I started trying to take #2 apart, and all I could make it do was one end cap would spin, and it would squeak slightly. I played on and off for around 10 minutes a night for nearly two weeks and made little progress. I did find that it was possible to get the end to ‘lock’ but that didn’t seem to help me open the puzzle. Slightly frustrated, I’d put it back on the puzzle shelf each night, and left it until the next night.

When I was at Stan Isaacs puzzle party last month, I spotted that he had all three puzzles sitting on a desk. I picked up what turns out to be #1, and solved it fairly quickly. I didn’t have attempt to open the original Wunder puzzle, but decided to order the remaining two puzzles I didn’t have as I really liked the mechanism on #1.

This is where I have a gripe with the woods Eric chose. The original Wunder Puzzle was a very dark wood, with a very light wood as you can see from the photo above. It’s hard to tell if the original puzzle was walnut or some other dark wood, or if the wood on one half was stained. Anyway, when Eric re-made the original mechanism, he chose a lighter bubinga and made the #1 mechanism from walnut. Personally, I think it would have been nicer to make the original in walnut, and his variation in the other woods. Yes, it’s a small gripe, but I am constantly confused as to which is which! 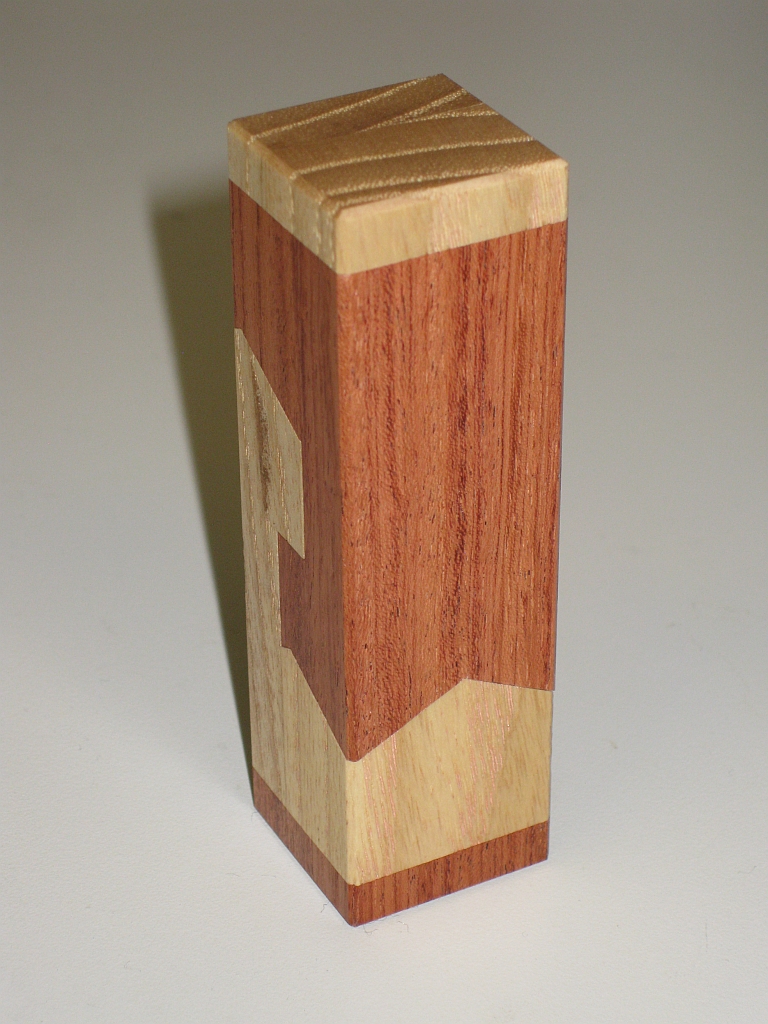 So back to the puzzles themselves. Each of the puzzles is 1″ x 3.4″ long, and are really beautiful pieces. They all have very precise geometry and dimensioning, such that the parts come apart perfectly smoothly, but require you to move them in exactly the right way or they will stay firmly locked in place. Limited to 30 of each puzzle, this is a fairly small run of puzzles, and looking at the work that went into them, I can see why.

The Original Mechanism has been recreated by Eric in Carolina Ash and Bubinga (see my small gripe earlier). Looking at the joint on the side of the puzzle, there really seems like no way this can come apart. The puzzle seems almost like a solid piece which has been glued together. I can assure you that no glue was used to hold the pieces together. The locking mechanism on this puzzle is fairly simple, but fairly clever. Many people who play with it may not find how to unlock it as there are virtually no external clues, unless you have a compass handy! There are still a few available here at the time of writing if you’re interested. 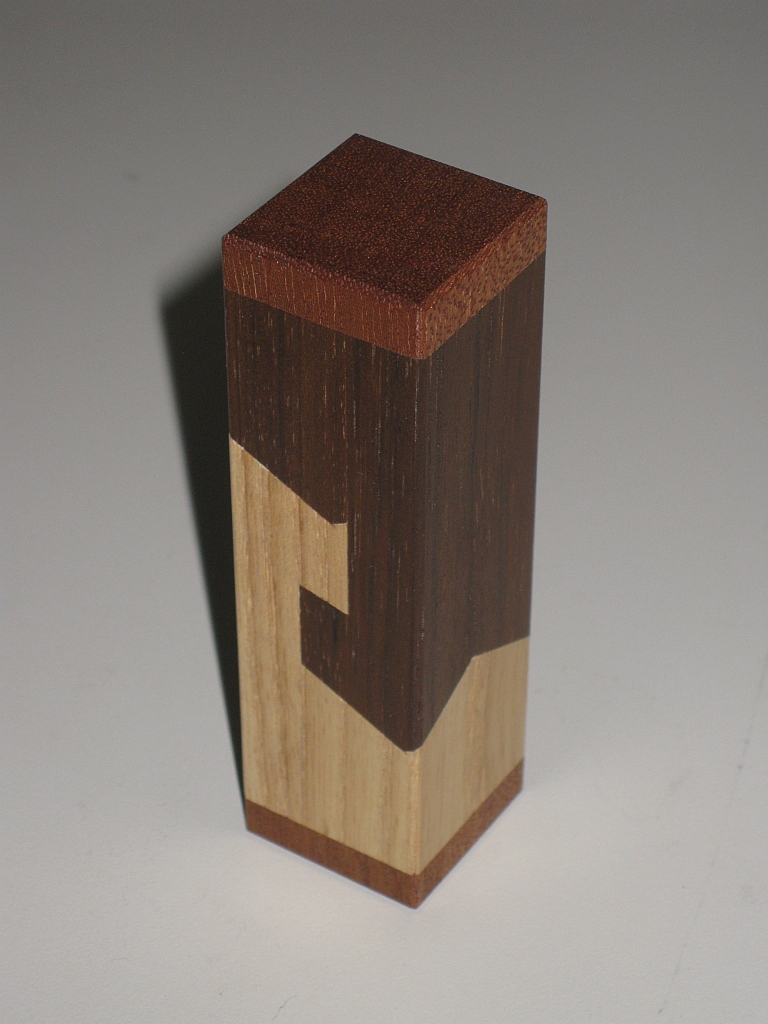 The first variation that Eric created is probably my favourite of the series. Made from Carolina Ash, Black Walnut and Sapelle, it’s a much simpler mechanism that the original or #2, and for my money has the nicest movement. Most people who pick this one up will solve it, and probably fairly quickly. Don’t let that put you off, this is a beautiful puzzle, and the look on someone’s face when the parts separate is worth it. At the time of writing, there are still a few of these available from Cubic Dissection and I’d highly recommend it to anyone. At under $50, this is a great puzzle. 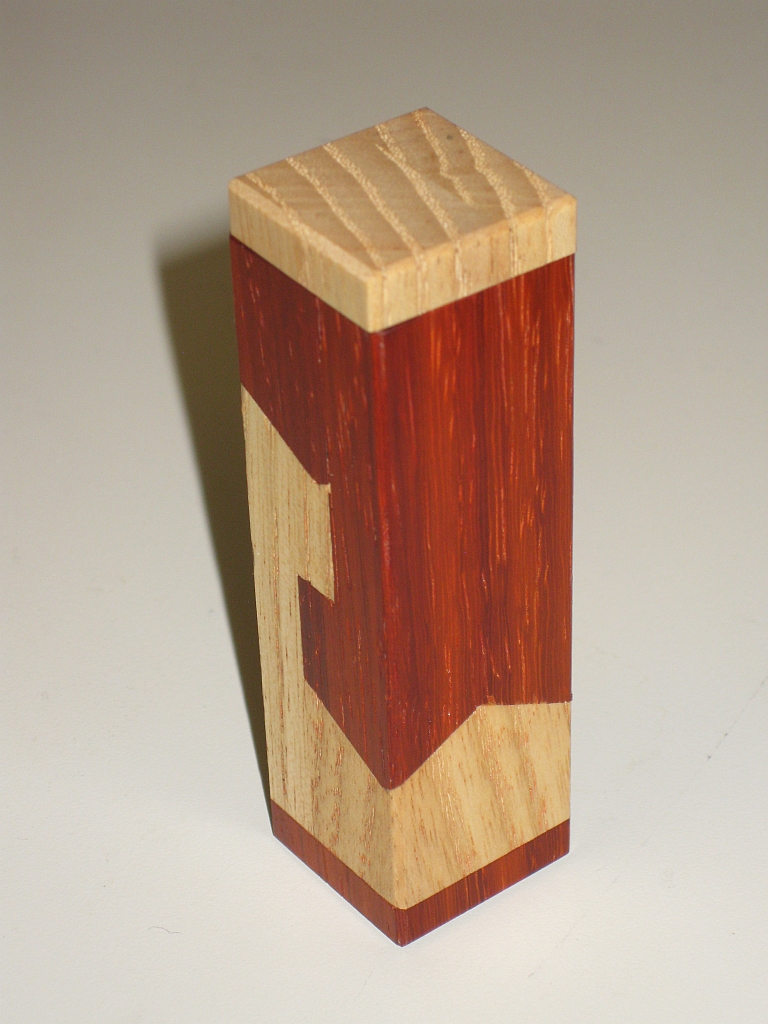 So back to Wunder Puzzle #2. Made from Carolina Ash and Paduak, the bright red of the Paduak really makes this puzzle stand out. It’s no Wunder, given it’s appearance, and the claim of being the hardest of the set, this puzzle sold out fairly quickly. Just a small side note, the Paduak version while a beautiful vibrant red colour currently, will gradually darken to a dark brown over time with exposure to light. Interestingly, the insides of the puzzle will remain that vibrant red, so you’ll get a nice surprise when you open the puzzle!

After a day of doing fairly well at solving puzzles, (I’d opened the Box with a Tree, Chip and Free Dial – reviews coming soon) I decided to go back to #2. After all, I was on a roll! Well, after about 15 minutes I had it open! The mechanism on this puzzle is devilish. It’s not easy to open, and very easy to relock when you’re trying to open it. Eric has made a very clever variation, which takes the original a few steps further. It’s a nice puzzle, but certainly not my favourite. This will keep you guessing for quite some time, until that ‘Aha’ moment, and things come apart.

As it happens, I did manage to open #2 before the others in the series arrived from Eric, however I am happy to have the full set. It’s a nice progression of puzzles, and they look great. I’d personally say that the order of difficulty is #1, followed by Original, followed by #2.

This is a great set of puzzles, and very nice to see new life being given to what was clearly a very old puzzle. I’d highly recommend these to anyone looking for something a little different for their collection.