Bolted Closed is a take apart puzzle from Bits and Pieces, which I came across on the Puzzle Master website and really liked the look of. The contrasting woods, and use of different metals makes this puzzle really stand out. Thanks to Puzzle Master for sending it to me to review. 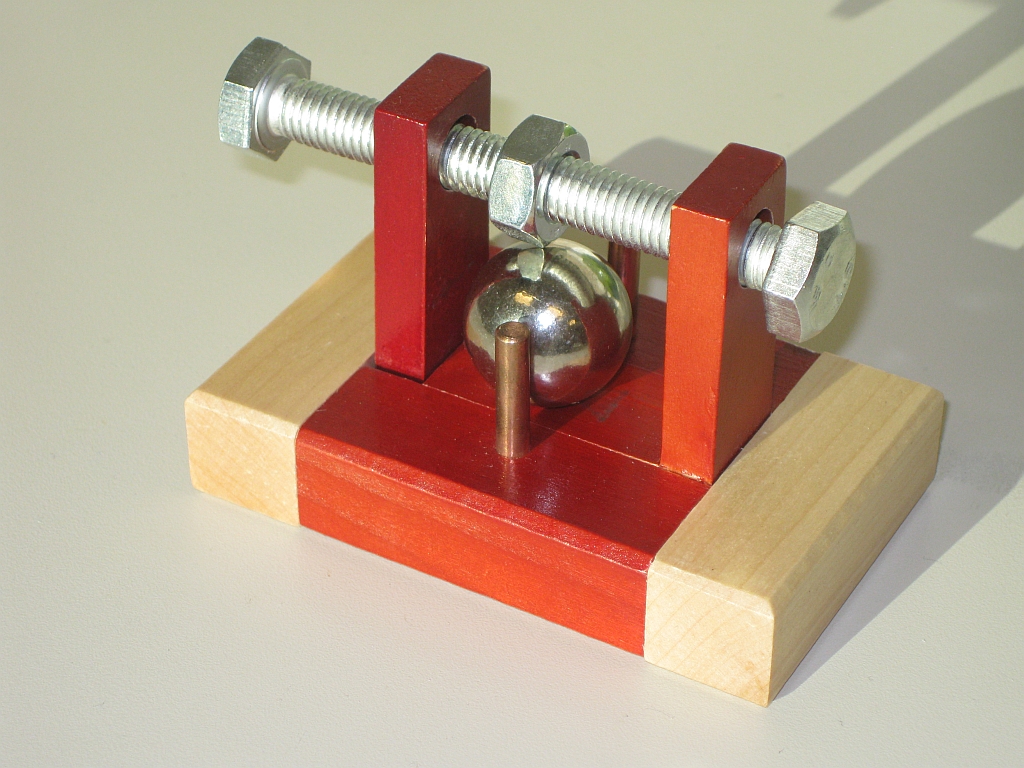 Bolted Closed by Bits and Pieces

The object of the puzzle is to remove the large ball bearing from its prison between the brass rods, wooden supports and the nut and bolts. The choice to stain the wood in the centre portion into a bright red helps to make this puzzle stand out and really makes you want to pick it up. When you do, you realise it’s a fairly heavy puzzle thanks to that ball bearing which is rolling around much more freely than photographs made me think it would.

The puzzle comes very simply packaged in a white cardboard box with the name of the puzzle (listed on the box as Brass Bolt), and some warnings about not swallowing the small parts. Safety information over, I opened the box and removed the puzzle, to have the ball bearing fall out, hit the floor and roll under my sofa. Not exactly the sort of challenge I was hoping for. The main reason the puzzle arrived in the already solved state is I think mainly down to the packaging of the puzzle. With no support or padding it’s all to easy for the mechanism to become free during shipping.

Recovering the ball from under the sofa, I put things back together, opened it a couple of times and thought it was almost a trivial mechanism, with no real puzzle element at all. Rather disappointed, I reset the puzzle, and put it on one of my puzzle shelves thinking it was a pretty poor puzzle. Coming back to it some months later to write the review I was able to solve the puzzle as it was intended, and it has gone up slightly in my estimation. I really shouldn’t have judged it based on what may have been a fluke when I unboxed it.

In coming back to the puzzle and trying to solve it fresh, I found that it didn’t open as easily as it had originally. As it turns out, when I closed the puzzle initially, I had only partially done so. The motions of putting it on the shelf and the taking it back down to photograph, had fully reset the puzzle, making it a slightly better challenge. Puzzle Master ranks this as a Level 8 – Demanding (out of 10) puzzle. I don’t think I’d rank it quite as high, possibly a 7.

The mechanism itself if fairly simple, and most people should be able to open it with a bit of time spent on it. The ball rolling around helps to disguise any mechanism at play so it would be easy to miss the first move to removing the ball as a result. Rule 11 as it is fondly known does play a part, but unlike some other puzzles, the amount of force required is small, and there’s no worry about hurting yourself here, unless you get your fingers stuck between the ball and the brass rods.

My biggest issue with this puzzle really comes down to how well it’s made. Ok, it’s not an expensive puzzle, and it does look great. Many other cheaper puzzles look cheap and this doesn’t suffer that fate. If you look closely though, the fit and finish isn’t all that high which lets the puzzle down slightly, but has to be expected given the price range.

The gap between the support post for the bolts and the base is large enough that you can easily see the mechanism keeping it closed, and on my version the two bolts are actually bent into a slight curve. The result being that getting things lined up to remove the ball have to be spot on or the ball will remain just trapped. I can’t tell if this is by design, or not but I have to think it’s unintentional. By the time you can get the ball close to being removed, the hard work is done, and the very slight bend seems incongruent with the solution.

For a beginner, this is a good puzzle. The ability to get a hint as to the mechanism will keep newer puzzlers interested and it does look good. I’d have to say, give this one a chance, and you may just enjoy the puzzle. If you’re really stuck, the solution is included, but I’d leave that in the box until you’ve at least had a play.