I was recently lent Sonic Warps cheaper entry to the puzzling market, the Kuku by a fellow puzzler. He has had it for some time, but was unable to solve the puzzle, and offered me a shot. I lent him my Isis at the same time. (I’ll review it at some point as well).

The version I have is the ‘hard’ version. Since the person who lent it to me is a serious puzzler, he opted for the harder version after hearing many reviews saying that if you are at all good at solving puzzles, then you don’t want anything less. 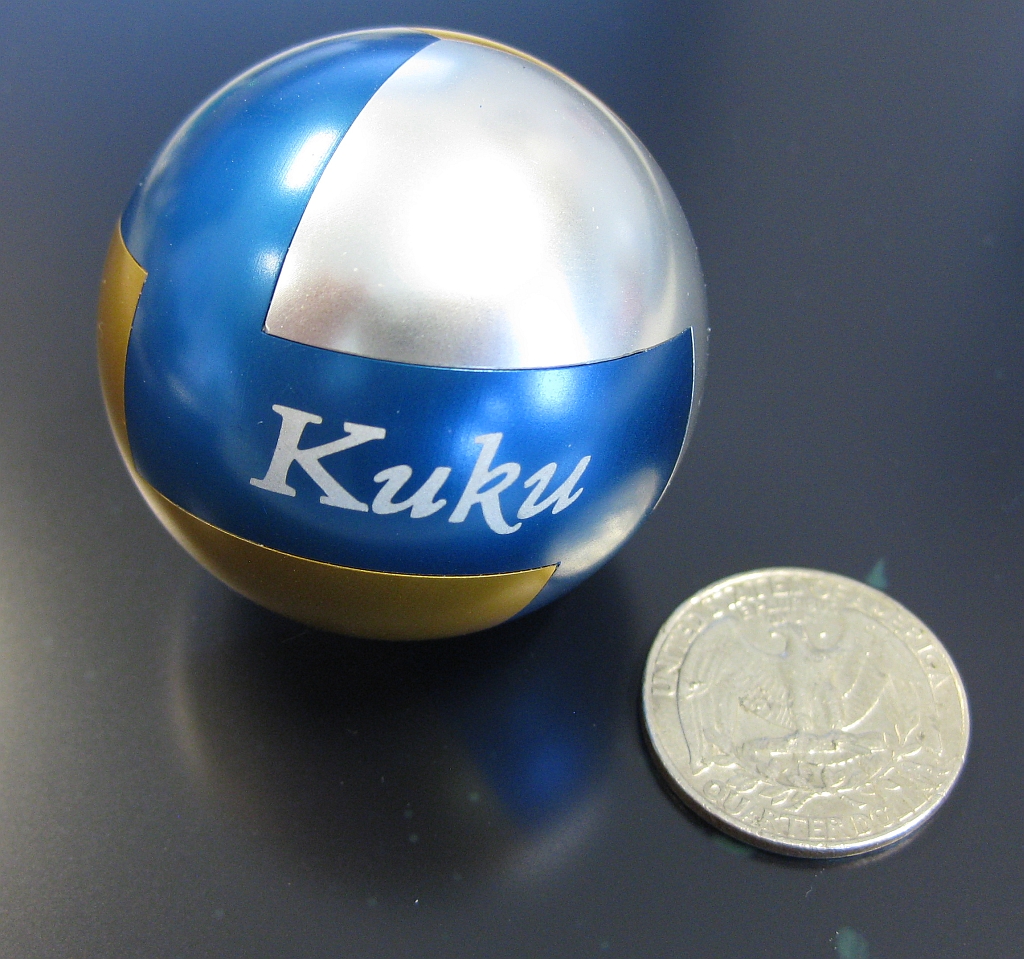 The first thing you realise with the Kuku is the size. This puzzle is tiny. As you can see from the photograph, it’s diameter is around 1.5 inches. It’s a great looking puzzle, with the three colours of metals used providing a good contrast and making for a very striking puzzle. When you pick it up, the whole thing rattles and it’s rather difficult to know what’s going on in there. This is nothing new for a SW puzzle so I set about trying to find out what’s going on. The object, open the ball. Sounds simple enough!

Holding the puzzle to my ear, and slowly rotating it, you can figure out that there are several distinct components inside. That’s useful but it doesn’t help you open it. I will admit that this puzzle sat on my desk for many months, with me picking it up and playing with it for 10 minutes at a time, and I never came close to opening it.

The reason sadly was down to issues with the puzzle itself. When the puzzle was put together, the coating used on the pieces is tacky. For most of the joins this wasn’t a problem, but one of the joins was sealed together, meaning that the puzzle physically wouldn’t move. So even doing everything right, I had no chance of opening this puzzle. It’s a comment I’ve heard from a number of people, enough to make me believe that this is a general issue with the puzzle, and not just a one off problem. My issue is that this really spoils the puzzle, and in fact makes it unsolvable.

With some hints from a fellow puzzler I have the tools to attempt to open this , but it requires some force which really should not be needed on the puzzle, and given that I am borrowing it, it made me less happy to go down that route.

There are many videos online that show you how you can open this puzzle. They do require that the puzzle doesn’t suffer from the problems the one I was borrowing had, but also defeat the point of the puzzle somewhat. If you don’t want it spoiled, then avoid searching for the solution. Really you shouldn’t need it!

Would I recommend this puzzle. Sadly no. It seems to be plagued by the Sonic Warp curse of poor production and is sadly let down as a result. If it worked as it was supposed to, this would be a fun puzzle, but as it stands, I’d say stay away.