Some of you who read my blog may already know that I had purchased a new table saw to add to my arsenal of woodworking tools, and that I’d had a few issues in getting it to me. I purchased this saw from Home Depot, they shipped it to me the next day, and it traveled from the east coast US, to San Jose in the West coast, over the weekend. It then sat in San Jose for a full week before it made it to my house. It was somewhere within 30 miles of me, but not at my house. This was frustrating to say the least, however Home Depot, also frustrated by the length of time to deliver refunded the delivery charges (which were not insignificant!). So thanks to Home Depot for that. Just change your carrier please!

Anyway, now that I have the saw I spent most of my Sunday building the saw, and setting it up. So for those who are interested, here’s my thoughts on setting up the saw, and the saw itself. 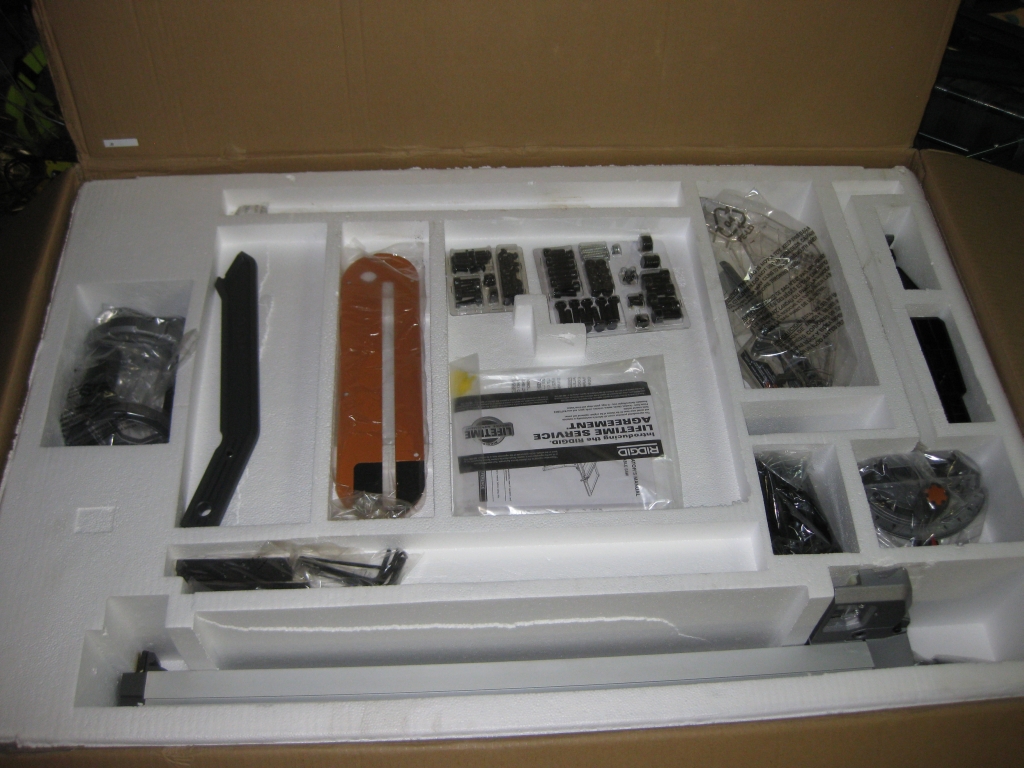 Opening the box and removing the top sheet of cardboard, you’re treated to an array of well separated parts. The fence, mitre, magnetic push stick instructions and screws all have their own spot. My only note here is that the spaces in the pre-formed polystyrene are a little large for a few items, which could lead to things sliding around more than necessary. 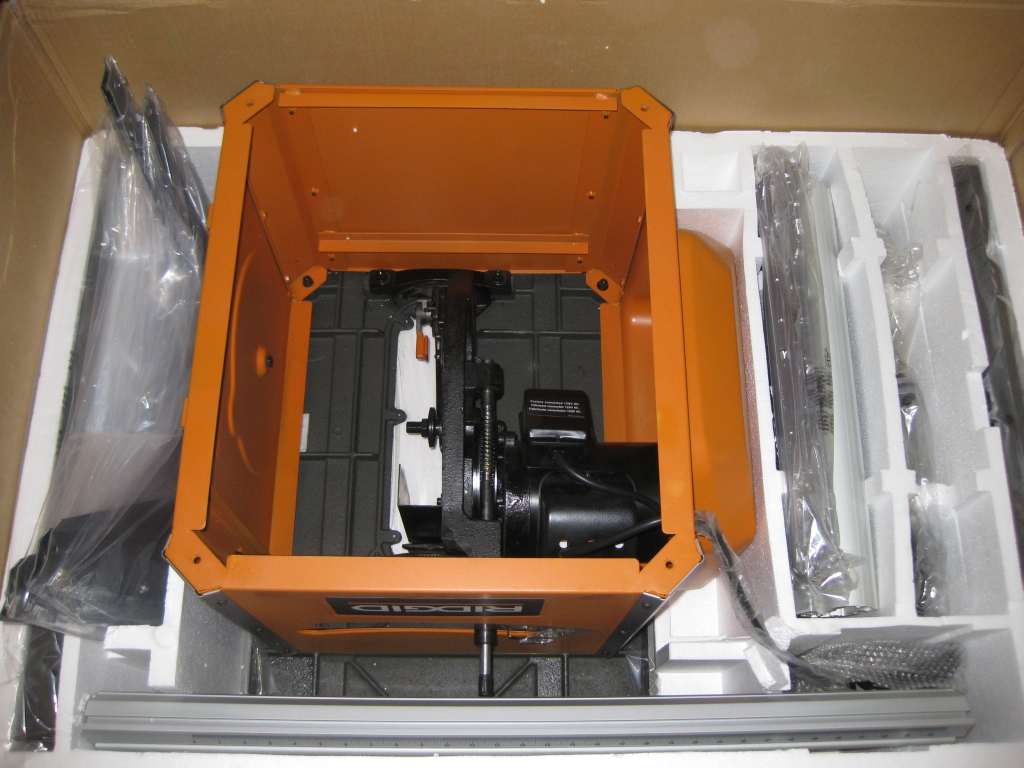 Opening the Box, revealing the saw itself

Having removed the top layer, the orange body of the saw is exposed along with all the legs and side panels that it will eventually sit on, and the rails for the fence. Again the packaging here isn’t perfect, as that front rail for the fence is rather free to bounce back and forth. Fortunately nothing was damaged. As you can see, the motor on the R4512 is now inside the case, unlike previous models where it was external.

At this point, the instructions tell you to lift the saw out of the box onto two thick planks of wood. Lift …. seriously! I took down a 2×6 board of redwood I had, and ripped it in half to put the saw on as the instructions recommend, then slit the cardboard box open, and with some help, half slid, half lifted the saw onto the boards. 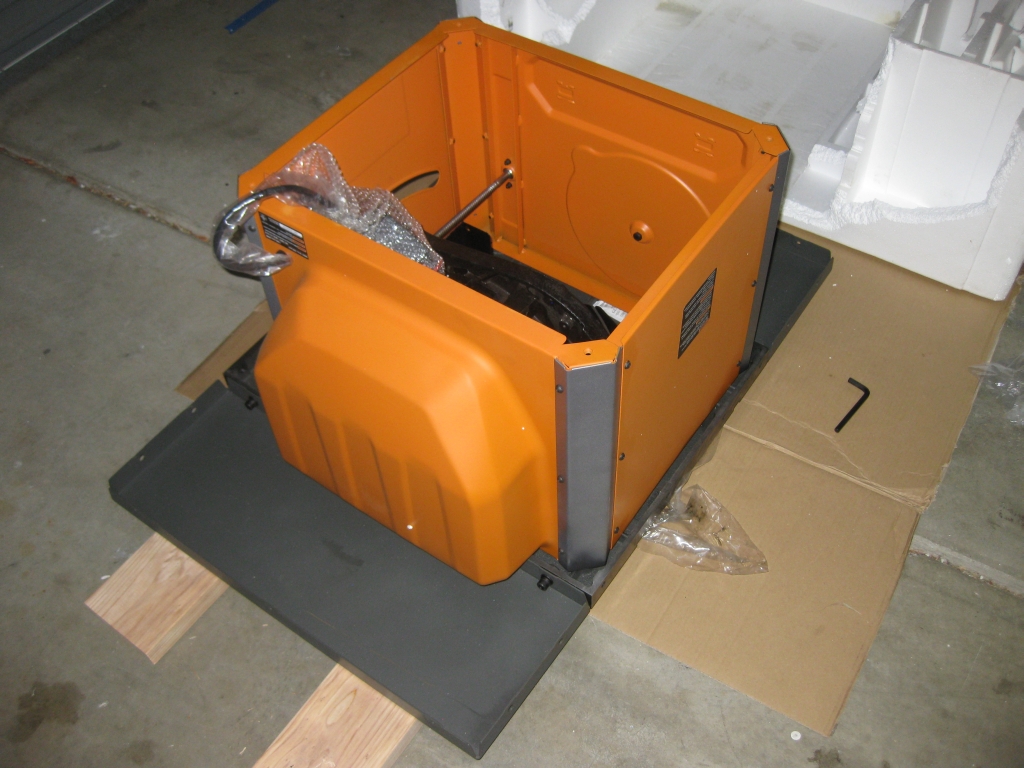 Taking the saw out of the box

The boards that the saw is resting on are supposed to make assembly easier. It certainly helps for attaching the table top extensions. Here’s my first gripe. The extensions are steel, and not particularly thick steel at that. While the main table top is cast iron, clearly Ridgid have decided to save money and not supply cast iron extensions as they did on previous models. This may work to my advantage as I’m waiting on the Benchdog Router table extension to arrive, which will replace one wing, and allow be to attach the wing I remove to the other side. Given that the steel will be lighter, it should require less support.

Using the cardboard from the top of the box, I assembled the base. The instructions at this point however are pretty poor. Initially, I thought all the panels were the same size. WRONG. I realised this when I was putting the last panel in place and found I had a trapezoid, and not a square (or rectangle) as expected. After a quick adjustment, I was back on track. The instructions state that a particular panel is the front, so that’s fine. What they don’t tell you is that the two sides with the Ridgid name indented in them are different, and it matters (slightly) which one is where. Anyway, I didn’t realise this, and in the end it doesn’t matter, but it would have been nice if it was clearer. 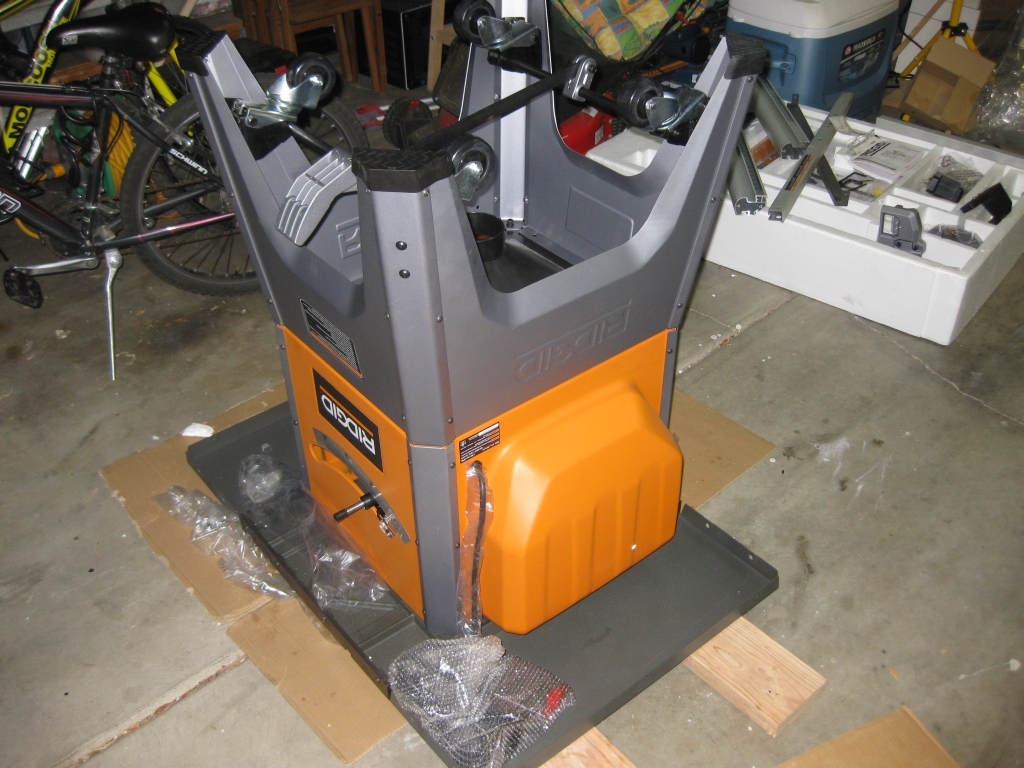 The saw with its legs and lift system assembled

Legs assembled, and dust chute in place, the legs get placed onto the bottom of the saw, and screwed in place. Next up is the lift system to allow you to move the saw around. This is going to make things much easier for me, as I don’t have the space to keep the saw in a single location permanently (yet).

Again, the instructions completely fail here. When putting things together for the lift, the diagram shows the orientation of the pieces, but neglects to mention how the bar has to be rotated before putting the wheels on. As a result, I had all four wheels attached, then had to remove them and start again once it became clear that things weren’t going to work. Not a big problem, but the instructions could have been clearer here. 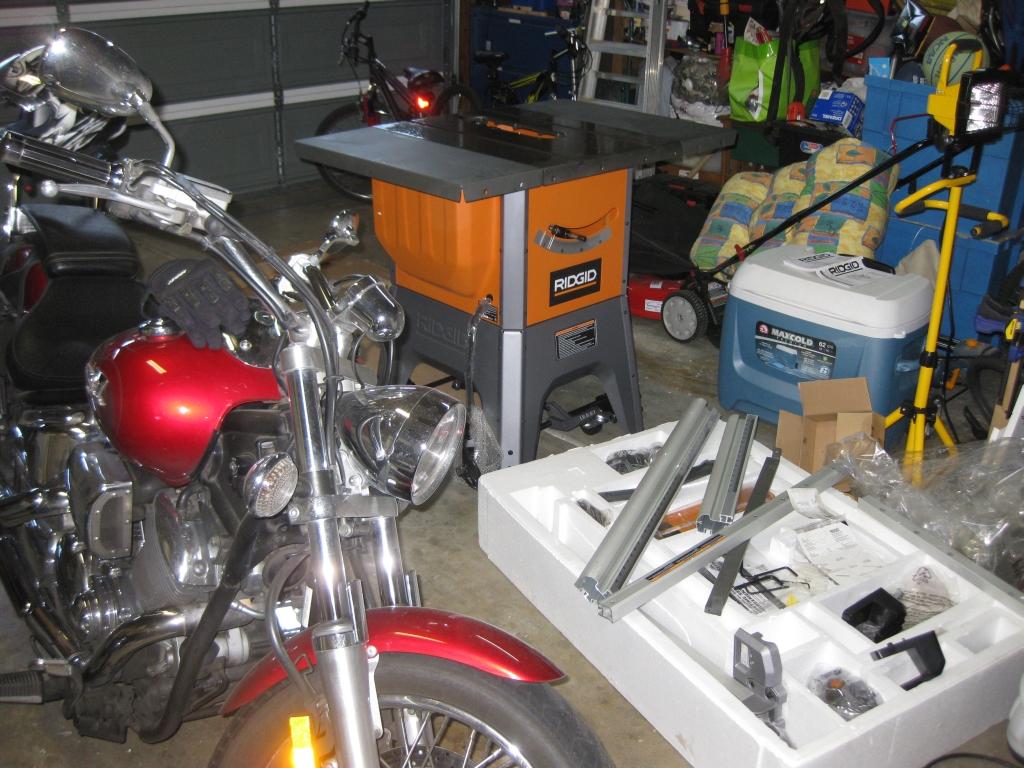 Getting the saw Upright

Now it’s time to get the saw upright. Knowing how heavy it is, I draft in some help in the form of my 16 year old son, and my fiancée. Very gently, and carefully the saw is first lowered onto its side, where my fiancée complains that she’s now covered in oil from the coating on the table top. (Perhaps laughing that this point wasn’t my best idea). Then we lift it up onto it’s feet. At this point, I realise just how high the saw is. It’s taller than I had expected, but actually sits at a really good height so you’re not bent over the saw when you’re working. Something that’s going to be important if I’m making lots of repetitive cuts for puzzle pieces. 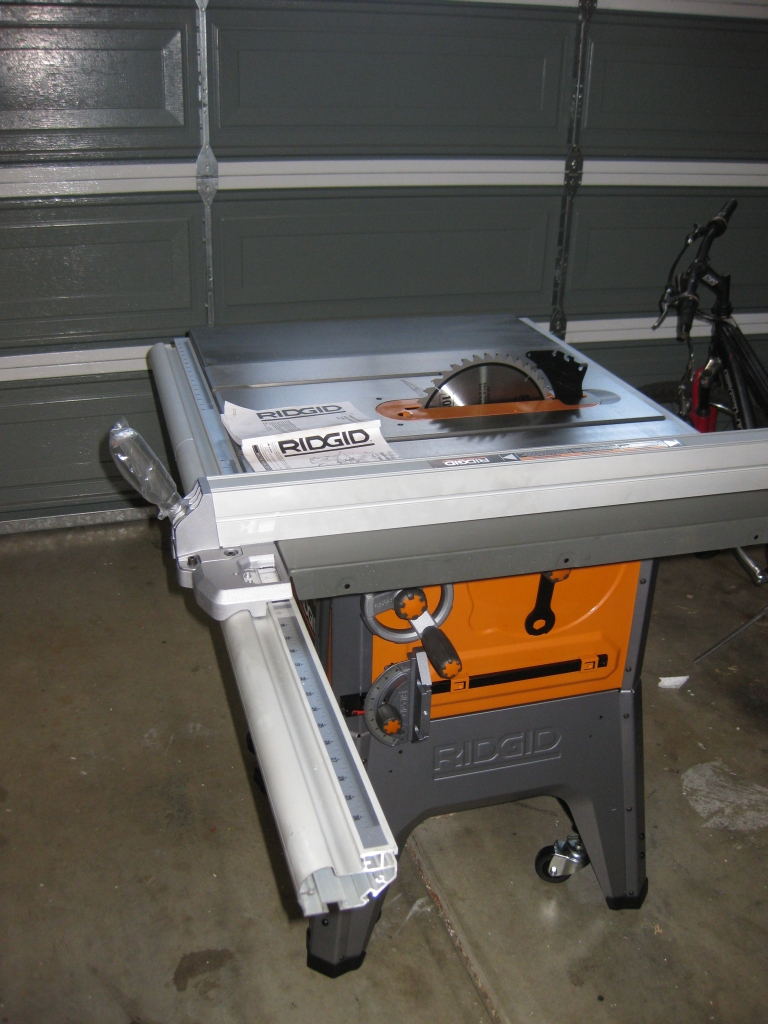 The next few hours saw me assembling the rails for the fence, the blade, where I shed a little blood to the project, but not in the way you’d expect, and leveling up the extensions to give myself a flat surface across the entire table. Add to that cleaning the oil from the cast iron, and polishing the surface up, and we have a nearly ready saw. So how did I shed blood? Well when installing the blade (I’m still waiting for my new Freud blades to arrive) you have to release the lock for the splitter at the back of the saw. I did so, and unfortunately, caught the skin of my thumb on that splitter as it’s a really tight mechanism. Cursing (more because I was now bleeding on the saw than anything else) I stuck a plaster over it to prevent any further blood getting on the saw and continued assembly.

This is where I found out about the panels on the base needing to be in the opposite orientation. You might see in the picture above the holes either side of the Ridgid name. These are for two brackets which presumably hold the power cable when not plugged in. Needless to say I didn’t bother adding these.

You’ll also notice that the saw has a built in Blade and spanner storage right on the side of the saw. I doubt I’ll put my spare blades there, but the tools will certainly be kept where I’ll not lose them. The miter also slides into some convenient storage on the side of the case as well, keeping it handy, but out of the way. 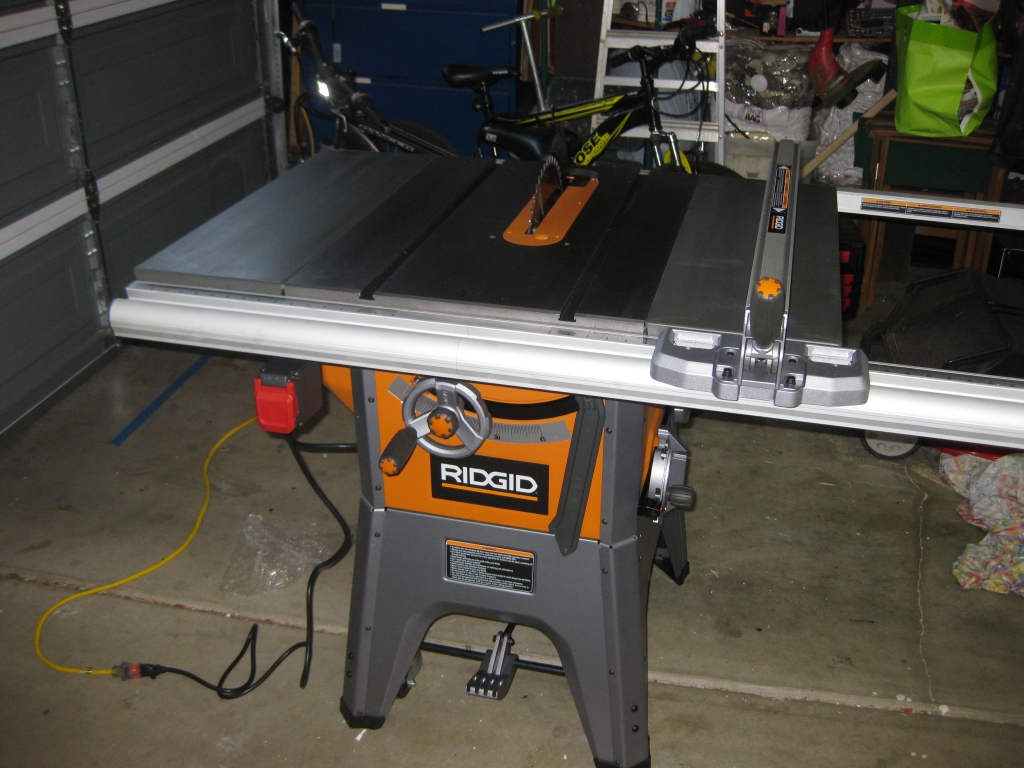 The last thing to do was to install the power switch which hangs from the front rail and turn the saw on. There is a nice touch on the power switch in that it is protected by a larger flap which means turning the saw on requires you to lift the top flap to get to the main power switch (which comes with the usual cutoff key), but turning the saw off you just need to press the larger outer flap. A nice safety feature, and a simple but useful touch.

Included are a kickback prevention attachment, and a blade guard. I haven’t put either of these on the saw since most of my work will be using jigs, so these are just going to be in the way.

So everything together it was time to plug the saw in and turn it on. That’s exactly what I did. The video below is the first time the saw was turned on. The blade isn’t wobbling, it’s just that grey band round the saw isn’t uniform all round the blade, so the optical illusion is that it’s off centre. Honestly, it’s not!