I know I’ve been a little slow in putting this together, but for those of you waiting for it, here’s my little round up of the Post IPP California Puzzle Party.

As with the last CPP, Stan Isaacs kindly opened his home to the motley crew of puzzle enthusiasts from around the Bay area and had a huge array of puzzles out and about for us to play with. Amongst those out were a complete collection of IPP31 exchange puzzles as well as my previous nemesis from the first CPP, Roger’s ‘Alles Roger’ puzzle.

Despite my complete inability to remember names, there were a good few faces I recognised, either from the last meeting, or people who were pointed out to me. If I’ve forgotten you, it’s not personal! In attendance were Nick Baxter, who sent me the info on the first CPP I went to. He couldn’t make it to the first party so it was good to be able to meet him this time, and talk about some of the exchange puzzles, some of the IPP design entries and a few other items in my collection. 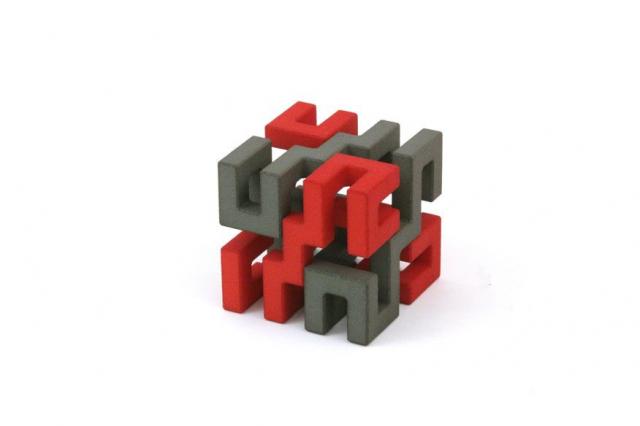 Derek Bosch had also taken a few hours away from his daughter to pop in and say hello. He’d brought his copy of STC’s Distorted Cube made by Tom Lensch. I played around with this puzzle for a little while, and given how good a puzzle it is, when Tom listed some on Puzzle Paradise, I jumped at the chance. Derek was working on Richard Gain’s Superstrings puzzle which was one of the Jury First Prize winners at IPP31. You can read Brian’s review here. This is a really tough puzzle, and I can see why it won favor with the judges at IPP. Much easier to take apart than it is to put together, Richard can be rightly proud of this one. 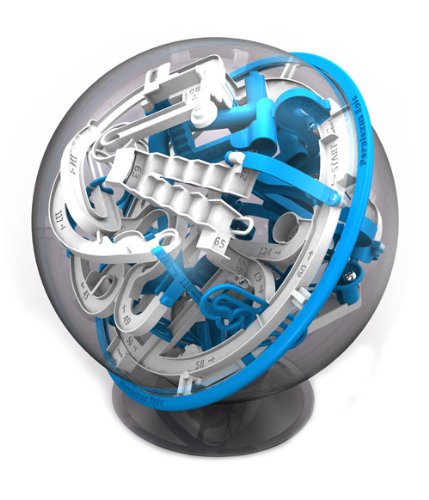 Fellow blogger Jeff Chiou was also there, having brought along the Perplexus Epic, since we’d talked about that at the last CPP. As it happens, I’ve bought myself a copy since the last CPP (yes, review coming along with the Perplexus Rookie!) so I didn’t play with it. When I arrived, Jeff was working on Alles Roger, having not opened it last time. I did spend some more time on this RD puzzle and this time I got the small ball bearing out of the puzzle. So, yes it is possible, no random shaking will not solve it, and the solution isn’t quite what I was expecting!

Not sure who it was, but someone was playing with Bram Cohen’s Cast Rattle at one point. Stan walked past and commented that he couldn’t open it just in his hands but someone around could. Someone (I told you I was bad with names) mentioned that I could open it and Derek mentioned that Bram was at the gathering, so I was promptly introduced to him. Great to meet yet another designer, and Bram seems like such a nice guy.

Harry Nelson who I’d met the last time was also sitting in Stan’s little study, and seemed to delight in handing my fiancée puzzles to see if she could solve them, much to my amusement. Jen’s not really a puzzler, although she is always interested in the exotic woods that the puzzles I own come in.

At this point, you’re probably wondering if I spent all my time talking or if I tried any of the puzzles. After all, why else do you go to a puzzle gathering? I did have a good rifle through the boxes of IPP exchange puzzles on Stan’s desk, as well as a few people handed me to play with. 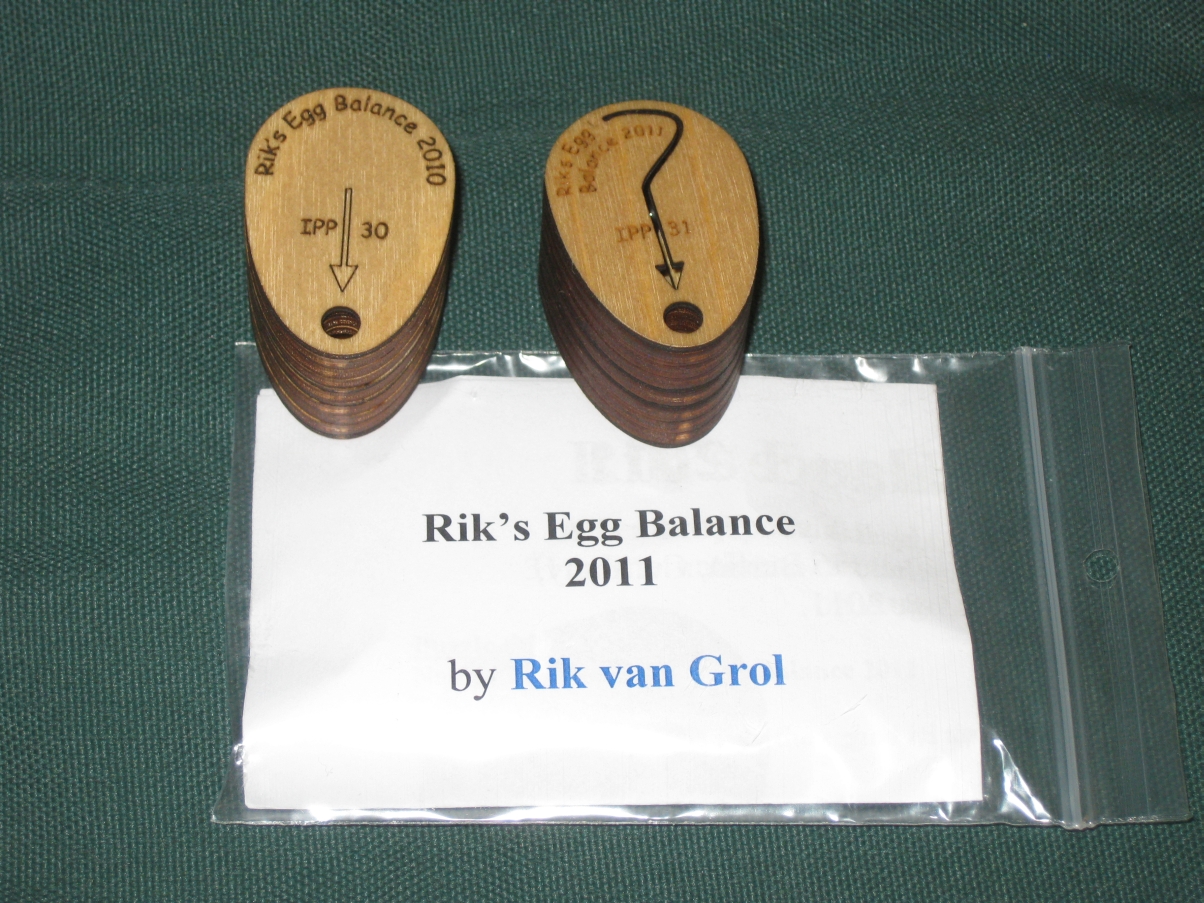 One of the first puzzles I tried to solve was Rik’s Egg Balance by Rik van Grol. This is the second year that Rik has used a laser cut egg, created from multiple layers glued together with a ball bearing inside the egg. The layers form a maze which the ball must be navigated through to get the ball bearing into the thin end of the egg, at which point it will balance on it’s ‘nose. Stan saw me playing with this years entry, and promptly handed me last year’s entry as well, commenting that the wasn’t sure which was worse! I have to agree with Stan. Both are really tricky, and even with the slot in this years entry which allows you to see the ball bearing, and some of the maze, it’s still no easier!

Despite Stewart Coffin having ‘retired’ from making puzzles, he’d made quite a few to be used as exchange puzzles. This on called ‘Check Me Out’ is STC #256 as was Dave Rosetti’s exchange puzzle this year. Dave was there and when he saw me playing with it asked if I’d like a copy. Both Derek and I sad yes in response, so I’ll write a full review of this one soon, since I have a copy of my own. Short version, it’s another devious Coffin packing puzzle. I also had a play with Stewart Coffin’s ‘Quintet in F’, #253 in his numbering. It’s similar to ‘Check Me Out’, with a non square tray, but the pieces are all the same. Every bit as maddening if I’m honest. I believe the trays in both puzzles are identical, and the unit sizes are the same, so I may have a go at making the ‘F’ pieces myself. If anyone can confirm whether the trays and pieces are the same, that would be great! 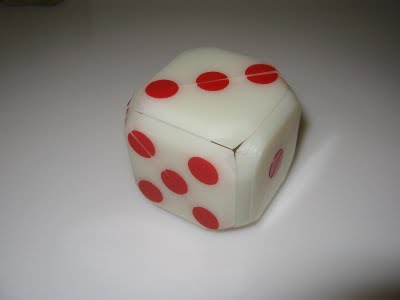 I picked up George Bell’s Dice Box made by Scott Elliot on his 3D printer using live hinges. Since it was already assembled, and I’d read on Scott’s Blog, that taking it apart was tricky, I didn’t want to go breaking it. I would like to have a shot at this one from its flat packed state, as it’s a good solid puzzle, and the design, using co-ordinate motion makes it looks like it would be fun to play with. (Scott, George – do you have any left 😉 )

While I was playing Derek and (I think Nick Baxter) were puzzling over Z-Shift. A Number of red and blue pieces of acrylic which have been glued back to back in some interesting pieces. There were a number of challenges to create heart shapes, and other such puzzles using the pieces. This seemed a little similar to ‘Black or White” by Tomas Lindén and Vesa Timonen. I don’t have a picture of this one. Sorry. 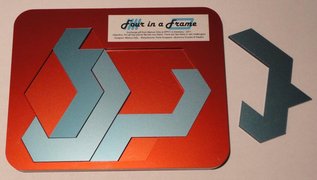 Four in a Frame by Markus Gotz. Image borrowed from Rob's puzzle Page

Four in a Frame designed by Markus Götz, is yet another tray packing problem that I tried out. This time four very unsual pieces, with a strange shaped cut out in the tray. The tray was double sided, with an ‘easy’ and a ‘hard’ side. I didn’t solve either in the time I played with the puzzle, but then tray packing puzzles aren’t my strong point. I borrowed this picture from Rob’s Puzzle Page so have a look there for more information and other pictures.

A few other puzzles I played with were Crazy Bottles by Jean Claude Constantin. The idea here is that it is a mechanical version of the “Three Jugs Problem”. If I’m honest I didn’t care much for this puzzle. The levers which were used to control the movement of the ball bearings were sticking and hard to move, and I was concerned I was going to break it. I know there were a lot of people very excited by this puzzle at IPP, and perhaps if I had the puzzle problem sheet and some time I may have liked it more. As it was I certainly didn’t want to damage one of Stan’s puzzles. 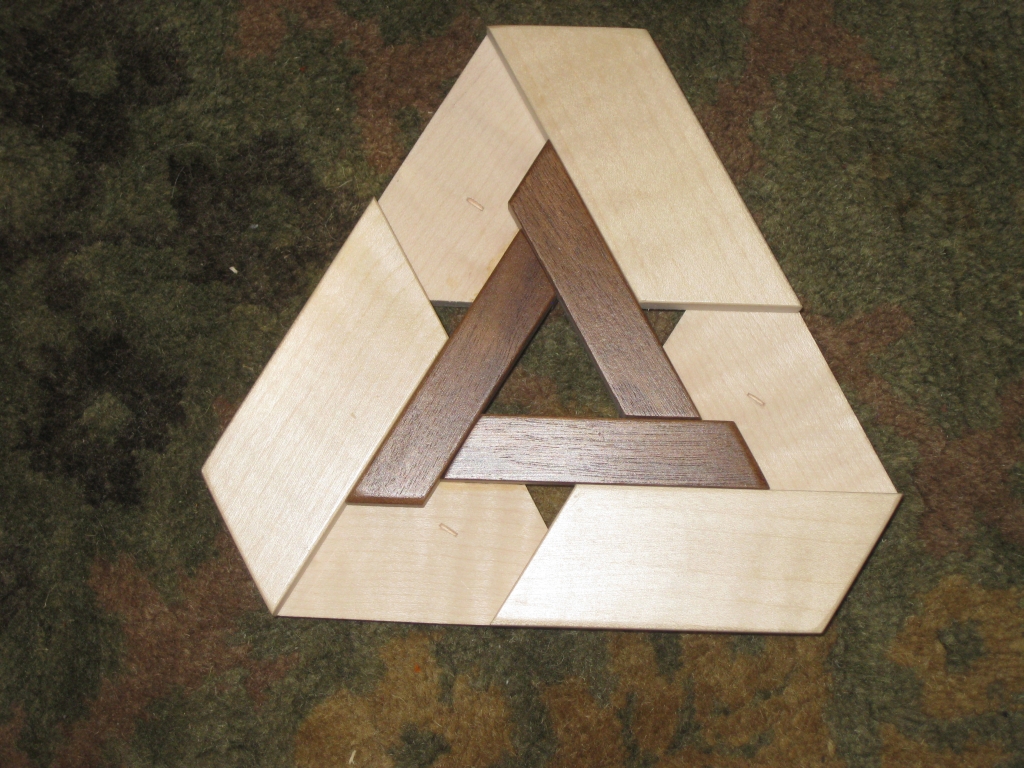 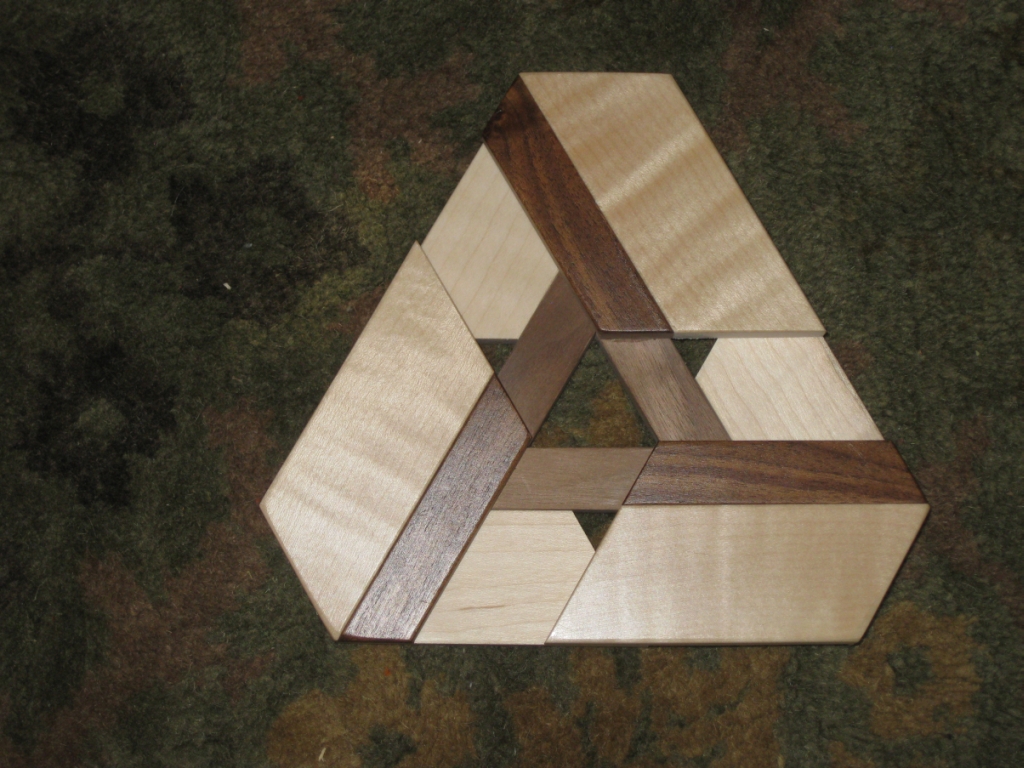 Triple Play other side

At one point I was handed a copy of “Triple Play” designed by Bill Scheckels and used as an exchange puzzle by Norton Star (I think). This is a beautifully made puzzle and is very tactile. There’s no sharp edges anywhere, and it really does want you to pick it up. A fairly simple puzzle, using a hidden locking mechanism and co-ordinate motion to slide the pieces apart. I really liked the look and feel of this puzzle, even if it was fairly simple to open. There’s something mesmerizing about the way the pieces move, and the use of light and dark woods.

That’s it for this CPP. I had to leave reasonably early this time, otherwise I’m sure I’d have spent a lot more time at this gathering. As ever it was a good meeting, and I look forward to the next one!