If you read my post on the Puzzle Paradise auction, then you’ll already know that I had won this puzzle, and was eagerly waiting it’s arrival. Before I delve into the review, there’s a few things I want to mention. 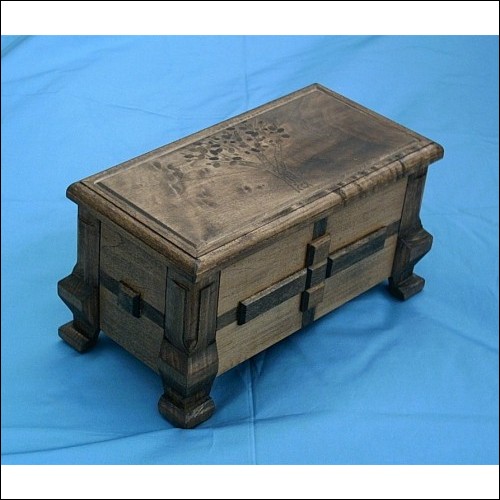 This puzzle came directly from Robert Yarger’s personal collection, so I had the pleasure of talking directly with Robert about the puzzle. Robert is a great person to deal with. He was really open about the puzzle, and we have chatted back and forth since the auction finished. Not only did he send #2, but he also threw in a Karakuri small box as well for me to take to puzzle parties for anyone there to have a go at.

While we were talking, Robert mentioned that Stickman #2 was one of his favourite designs, due to the rhythm of the moves when opening it. He plays guitar as do I, and likened it to playing “Babe I’m Going to Leave You”, by Zepplin. Having been able to play with it myself, I know what he means.

So the puzzle itself is a good size, at 11″ x 6″ x 5″. And it’s solid. This is not a puzzle you would be worried about passing to someone to try. One small thing to note is that one of the sliders (the one on the back of the puzzle) is a little loose, and tends to move on it’s own, with the help of gravity. That does mean that for some of the moves, you need to take a little care that it doesn’t move before you want it to. On the whole not a big issue, but it does mean you have to watch what you’re doing.

Solving the puzzle for the first time is really nice. There’s a few obvious moves, then you hit a wall. There seems to be nothing else to do, but you’ve not opened the box yet. After a little more exploring, you find out what to do, and get a bit further. Another 10 minutes of playing and you can remove the first hidden compartment, which reveals the second … and third although you don’t realise it at first!

Knowing that there are 4 hidden compartments in the box, you know there is more to find, but at this point nothing else will move. The final step is really clever and needs some out of the box thinking which I really like. Overall, I really enjoyed this and am very pleased to have it in my collection. Robert tells me that it can be opened in 30 seconds (all 55 moves) so I have some practice to do!

There are a couple of things that disappointed me slightly. The box comes with a small book which gives the number of the box in the series, and a little bit of background to Stickman. That’s great. But The next page is the start of the solution. Now I quite happily put the book down without reading the solution, but I’d rather the solution had been sealed so you had to make the decision to read it, rather than it being a little too easy. Again, not a big issue, but something I’d rather have seen done differently.

The last thing is a little oddity, which I’ll have to ask Robert about. The book tells me I have number 24/50. Stamped on the bottom of the box along with the Stickman logo is 18. I have to believe that this means it’s #18 out of 50, but I’m not sure. Again not an issue but a little inconsistency.

If you get the chance to own one of these, then I’d say go for it, you’ll not be disappointed. And Robert, if I’m in your neck of the woods, or you’re out by me, the beer is on me.