In the most recent round of puzzles from Eric Fuller, he offered a few copies of Tom’s Square Dance. Sadly I was too slow this time and didn’t manage to get a copy myself. Fortunately my good friend Derek did get a copy, and he happily lent me the puzzle to play with! As the name hints, this is another great puzzle design from Tom Jolly. 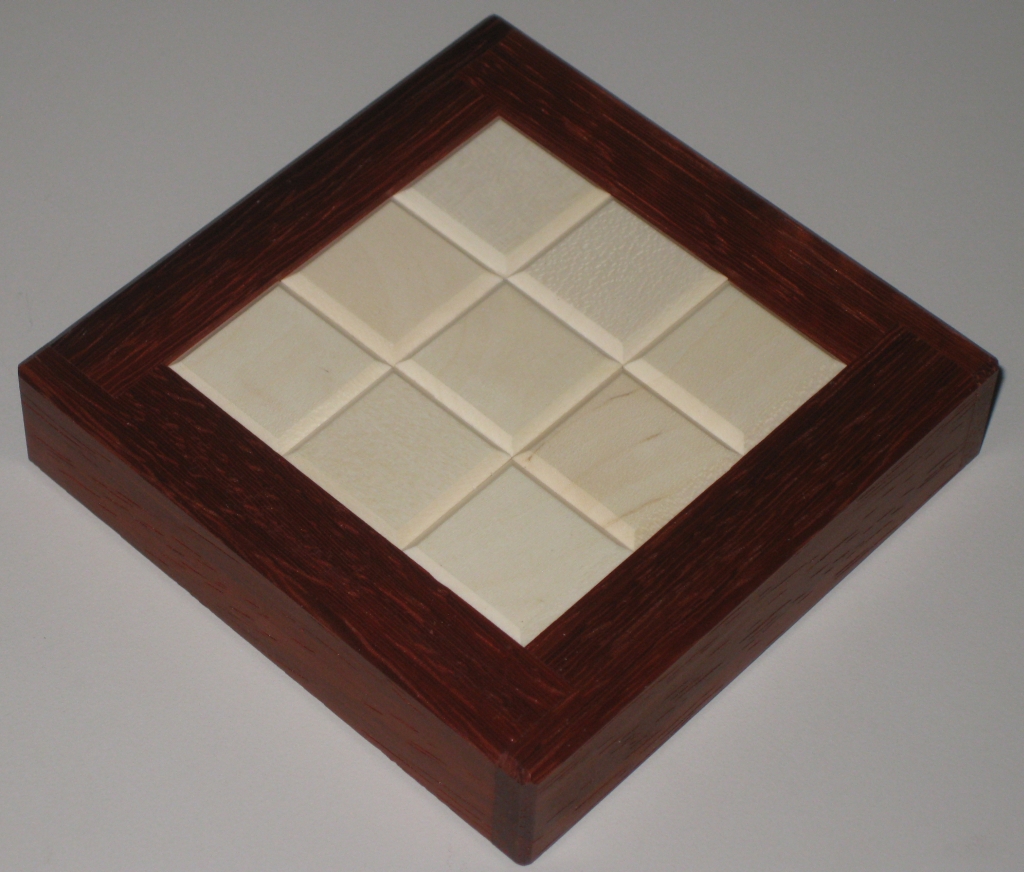 The Puzzle measures 3.3″ x 3.3″ x 0.75″ with the ‘cubes’ being 0.75″. The goal of the puzzle is to remove the pieces from the frame and then return them back to their original positions. One of the corner blocks is held in place with a small magnet, and once removed the rest of the blocks can be slid around inside the frame. While it may sound like there’s not much to this puzzle, you soon realise that there’s more to it than it first looks. 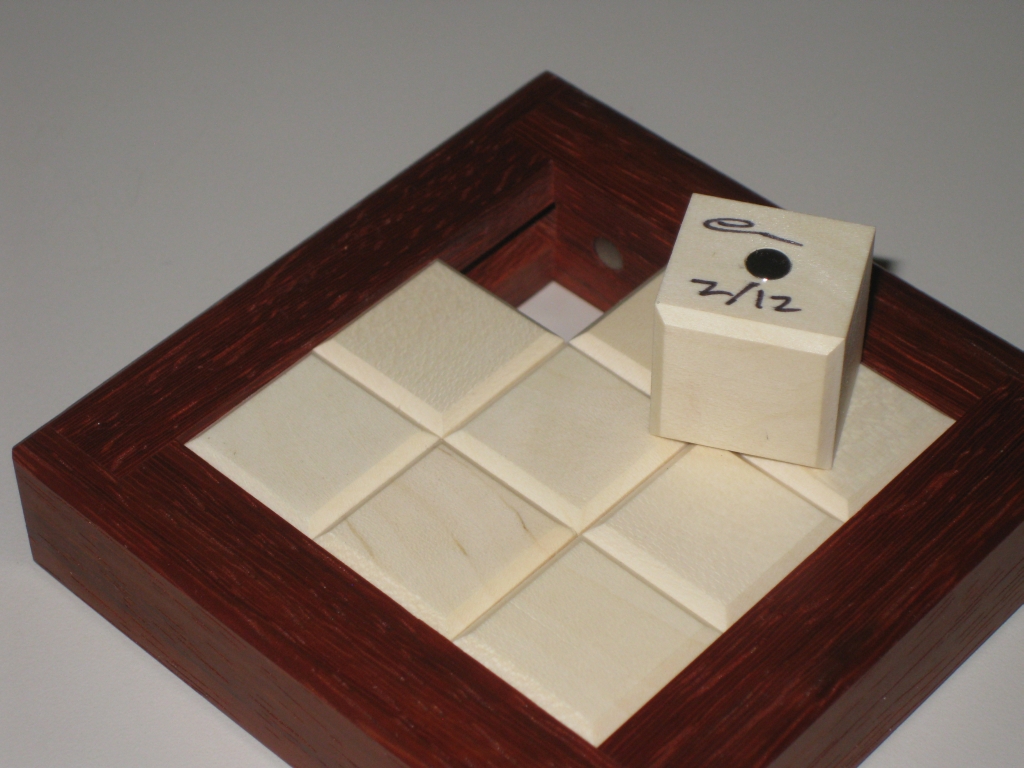 The blocks are not simple pieces, and have various bits sticking out of them so that they both slide against each other, and interact with each other allowing and preventing various pieces from moving. To make things more interesting, hidden around the frame are various blocks which also prevent the inner blocks from moving around!

Eric really went all out in making this puzzle. Offered in two different frame options, Bubinga and Paduak, with Holly pieces, the contrast looks great. Over time, the Paduak frame will change from the bright red/orange it is now to a very dark brown. The beauty of this will be that the inner frame which is hidden from the light will remain bright orange, so on solving; it will make for a very pretty reveal.

The thing that really makes this special is that the puzzle pieces are all milled from solid pieces of holly, and not layered pieces glued together. As such the pieces are very strong, and the time to create these pieces is much more labor intensive than gluing the blocks together. Eric has created the pieces such that the tabs are several thousands of an inch thinner than the grooves they run in. The precision of the pieces is really stunning, and shows the quality of Eric’s work. What it leaves you with is some really beautiful pieces, where the grain flows through the entire piece, something that could only be achieved with the time Eric put into the making of the puzzle. 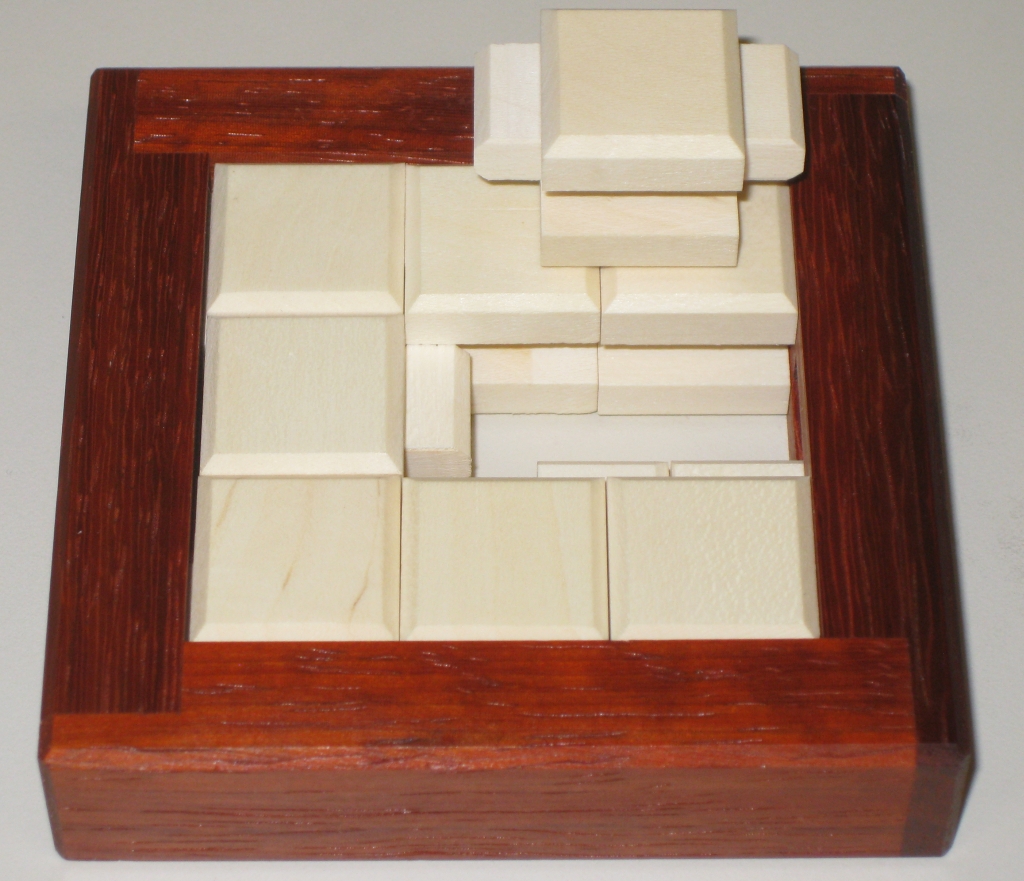 The Second piece removed (oh, and the pic won't help you solve it!)

To solve the puzzle, after removing the first block, it takes 8 more moves to remove the second piece, and as Allard and Oli have already commented in their reviews, the first piece comes out in a rather unexpected manner. It’s not too difficult to remove the first piece, and the second follows not too long after that. I think the reason is that the obstructions as well as hindering also mean that there’s a fairly linear path to follow to removing the pieces.

All the pieces removed

Putting the pieces back into the frame once you’ve taken them out and jumbled them up is a far greater challenge. It took me around 5 minutes to take the pieces out, but a couple of hours to get them all back in. It’s not impossible, but certainly a good challenge.

It total, the solution is listed as a 1.8.5.3.4(.2.2.3.3). The part in brackets really doesn’t count as there’s so much space at that point, that things just fall out! To my mind there is really only one solution however, if you plug the pieces into burr tools once you’ve solved it, you’ll find that it reports a second solution, with a different move count 1.8.5.3.2(.3.2.3.3). Now this alternate solution is actually identical to the original, the only change is that the two identical pieces in the puzzle are placed in the puzzle in a different order. Talking to Andreas about this, he notes that the tool will try to find a short path from the current point to removing the next piece. Depending on the state of the puzzle, this may be different, really only the count to remove the first piece is accurate.

I have to admit, I really enjoyed this puzzle. I think it’s around the right level between frustration, difficulty and solvability. Eric’s copy is superbly made, and while I’m a little sad I didn’t manage to get a copy of my own, I’m very happy to have been able to play with it thanks to the kindness of my puzzling friends.