It’s been a while since I reviewed any of the Hanayama puzzles, and I have quite a few to get through, including a few of the newer puzzles. The Cast O’Gear though is one from my early puzzling that I remember solving having been given a copy by my Dad. Designed by Oskar van Deventer, and originally named Sunflower, this was entered into the IPP Design competition back in 2001 where it received an honorable mention. In 2002, Hanayama produced this version under the name Cast O’Gear. 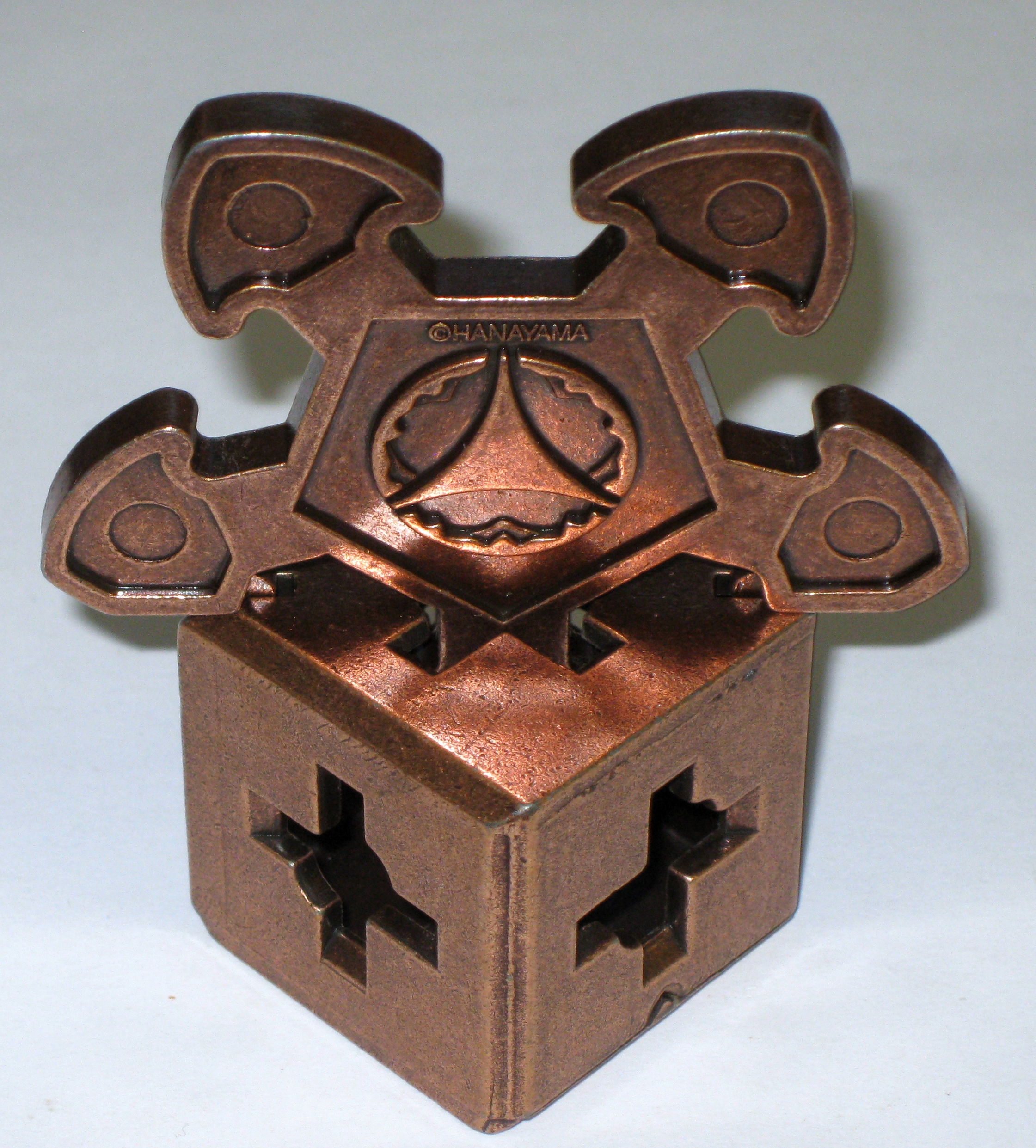 Cast O’Gear in the starting position

The antiqued Bronze look of the puzzle seems to have people divided about its appearance. I personally like it. It’s a fairly average size for a Hanayama puzzle, measuring in at 3″ at its widest, by 3.5″ tall and 1.5″ deep it’s a solid puzzle although not too heavy for its size. The goal is to separate the two pieces by following the step maze to the exit.

In its starting position above, there are a number of key features that help with solving the puzzle. The small triangle on one face gives both direction and orientation information about the cube. and the indents on the ‘gear’ allow for orientation of the gear relative to the faces of the cube. One additional piece of information not visible in the photograph, is the arm which is inside the cube has a hole in it, giving the ability to create a visual reference for each arm.

The exit to the puzzle is on the opposite face of the cube, and the cutaway on one of the arms can pass through a corresponding groove in the face of the cube, when it has been aligned correctly. There are 120 possible states that the puzzle can be in based on which arm is inside the cube, the orientation of the gear, and which of the six faces the gear arm is inside. To make things a little harder, it’s not possible to transition from all faces to all other faces. The cube is designed with a number of beveled edges to allow the gear to rotate, as well as a couple of sharp edges which prevent the gear from rotating. So often you think you’re on the way to the exit, and find the path blocked by a sharp corner.

Each face also has a curved cutout in the central cross, which allows the gear piece to be rotated by 90 degrees. You can only move in one particular orientation though, governed by where the cutout is, so again you find that you may want to rotate the gear in one direction, however find that path blocked. 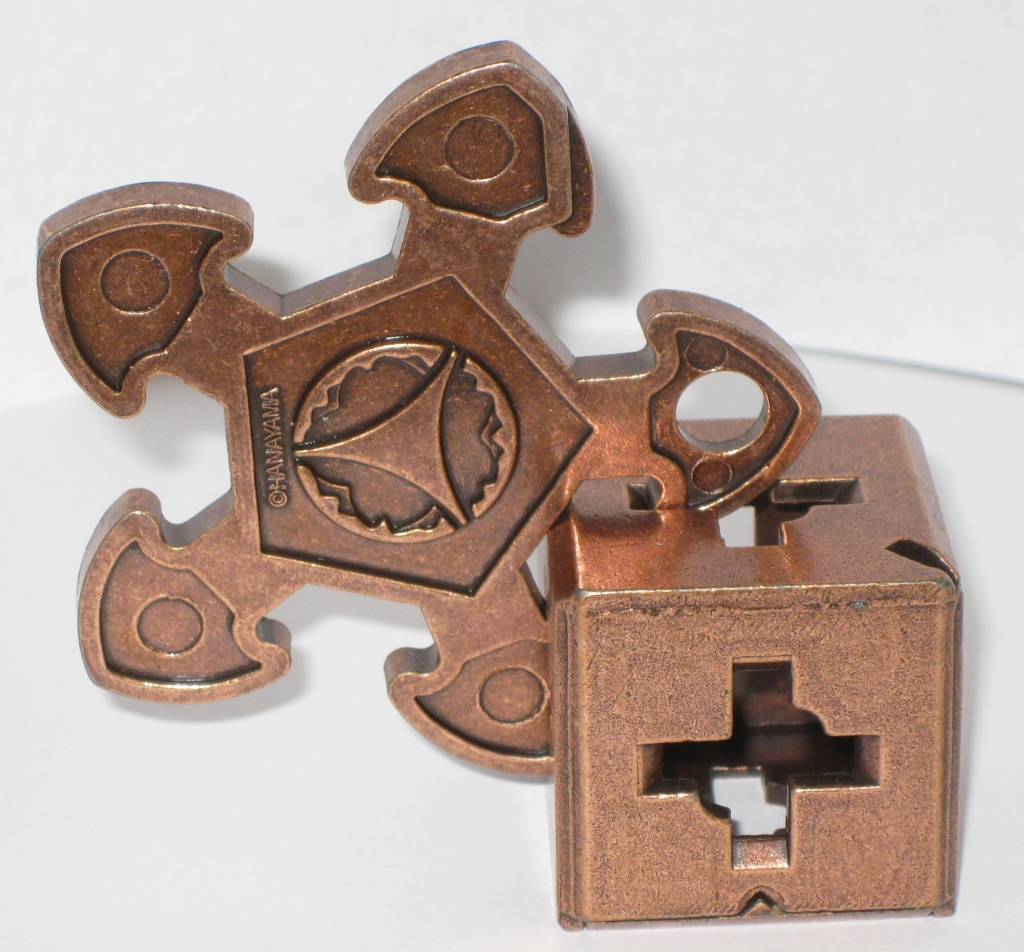 Moving the gear around the cube

With some logical thinking and planning, this shouldn’t be too tough a puzzle, however it’s easy enough to get lost and go round in circles, trying, and re-trying the same paths, and making little progress. It had been a long number of years since I had solved this puzzle last, and it was certainly no walk in the park. I spent a good half hour just fiddling before realising why certain moves were blocked (must have been having a slow day) and then setting about to find the correct path to the exit. By checking the orientation that the gear needed to be in to allow it to be removed from the cube, then working back through the possible rotations and moves between faces, the path was easy enough to navigate, despite needing some paper and pencil to plot the moves in reverse then execute them. 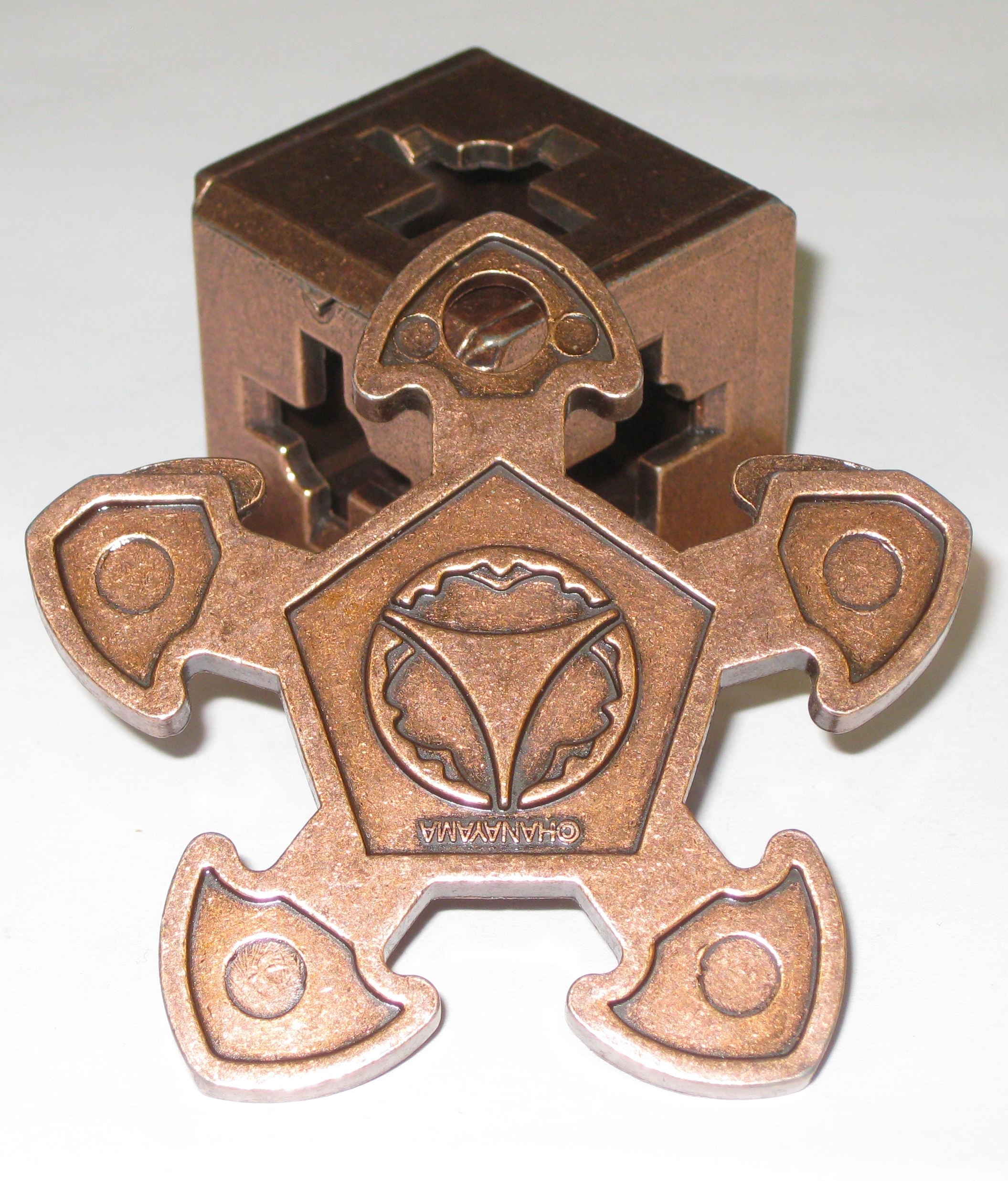 Solved, with the gear removed.

There are a minimum of 16 moves needed from the starting position to separate the two pieces (if my counting is correct), however as with any maze, you may end up taking far more moves by the time you take into account the dead ends and back tracking that is likely to end up in the solution path.

There are lots of puzzle shops where you can buy your own copy, and it’s available on Puzzle Master as you might expect. If you don’t have a copy, I highly recommend it, as it’s a great fiddle toy, that you can spend a lot of time just moving the gear around the cube, and not really trying to solve the puzzle.