I recently borrowed a set of five Puzzle Master Trick Locks from fellow puzzler Brian Pletcher, through the Puzzle Library run at Renegade Puzzlers. Brian has already reviewed the locks, so check his series of reviews here. Jeff Chiou had the locks before me so I met him over lunch to talk about puzzles and for him to pass on the locks to me, since we work fairly close to one another. Read his thoughts on his blog here 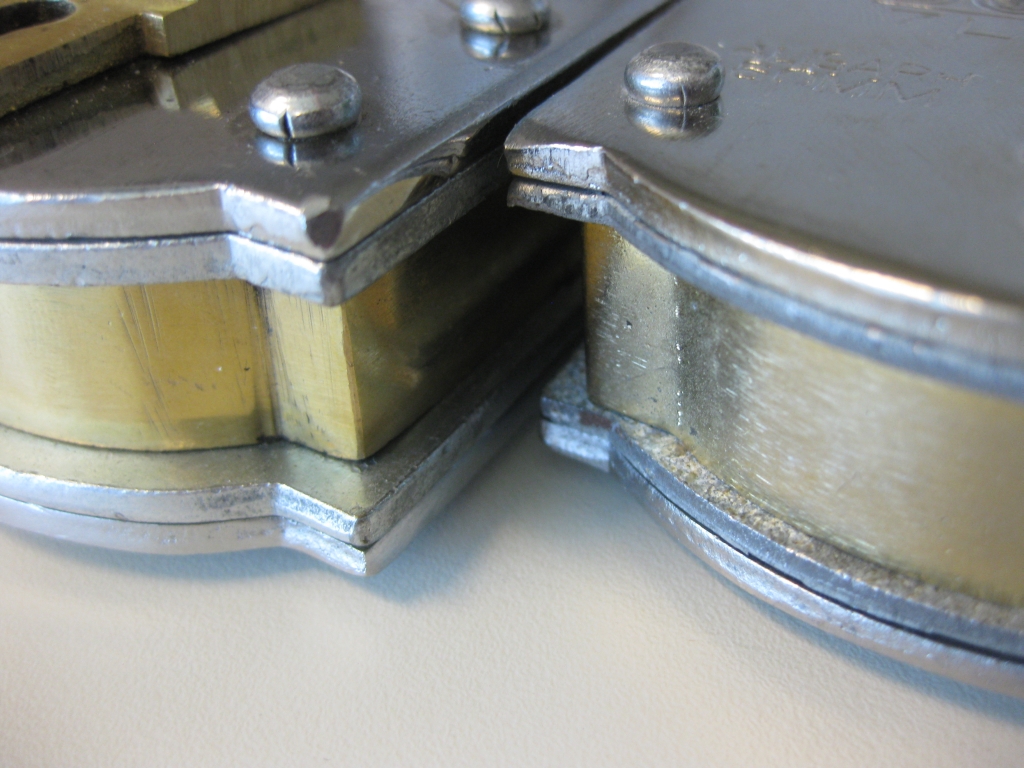 The first thing to note with all of these locks is that they are all solid. They’re constructed from double thick steel plate and brass riveted into stacks as you can see on the right. That gives them a very solid feel, and significant weight to each lock. One thing to note from that however is that it doesn’t mean that these are high quality locks. The fit and finish is rough giving the locks a ‘well used’ feel to them. The keys for the locks seem flimsy by comparison to the build of the locks themselves. Priced between $20 and $30 per lock these aren’t the cheapest puzzles out there, but they are on the low end of the scale when it comes to puzzle locks. That is somewhat reflected in the level of difficulty of the puzzle, as I’d classify all of these as easy. I’m not a trick lock expert, however I opened all of these very quickly. The locks come from India, and to my knowledge, Puzzle Master is the only place to buy them currently. 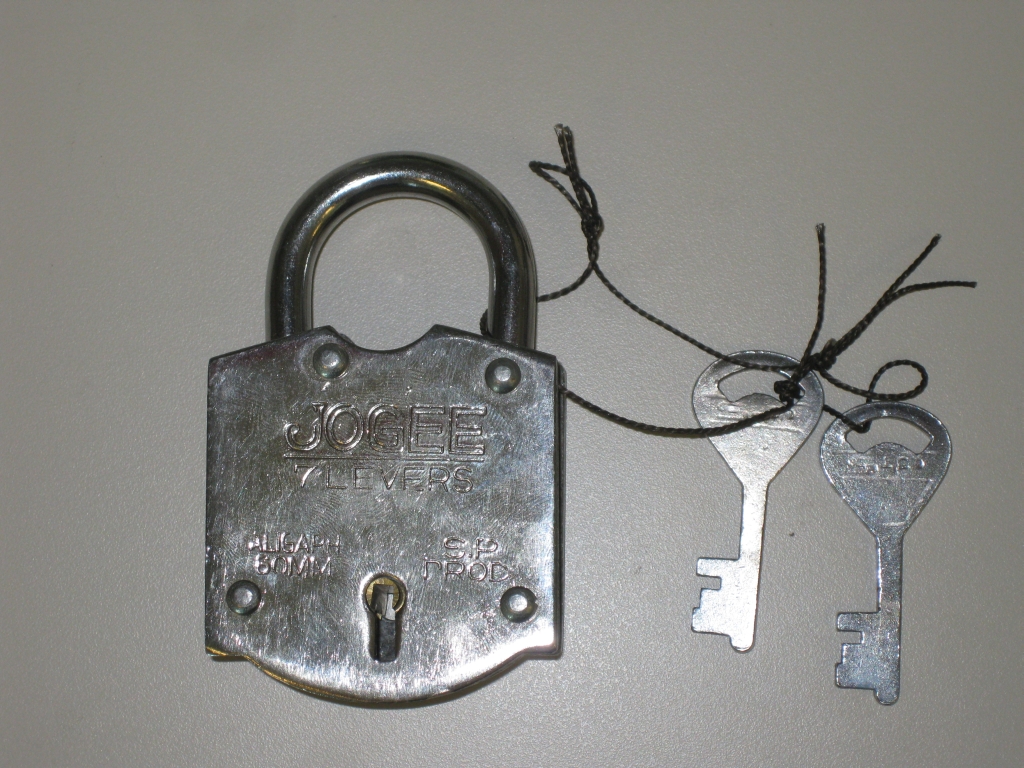 The first of the trick locks is the most traditional looking lock of the set. From the front, there’s nothing unusual, however inserting the key and turning in any direction isn’t going to get you far. The secret to this lock isn’t well hidden, and really is my one big problem with this lock. Had the secret been hidden better, this would have been a far better puzzle lock. 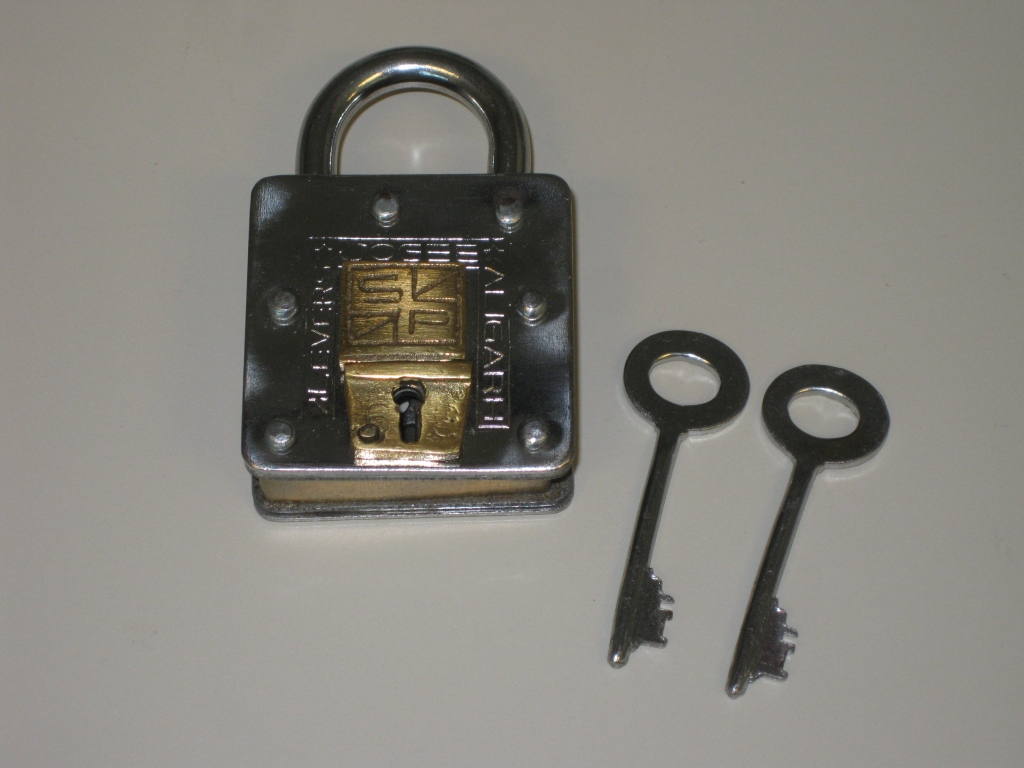 The second lock in the series is both the smallest and lightest of the locks. Inserting the key into the lock you’ll find that it doesn’t even turn so clearly that’s not the solution. This has a novel mechanism which may catch some people out as it’s not entirely obvious. The fit of the mechanism lets it down slightly , but also helps to throw you off the scent as things which really shouldn’t move, do. The back of this lock gives the puzzler a hint as to its solution, however the mark on the back is subtle, and may be easily missed as a manufacturing defect. Given it’s location I’m inclined to believe it was a hint rather than a flaw.

The third lock in the series is a fun lock. The mechanism isn’t obvious, and is possibly the best hidden of the series. I have to agree with Brian’s review that it is entirely possible to open this lock without knowing how you did so, and given that, not reset it back to it’s locked state. The stylised front adds a nice feature and is probably my favorite aesthetically in the series. Again, it’s not a difficult puzzle, and the solution isn’t obvious so this may keep some people guessing. 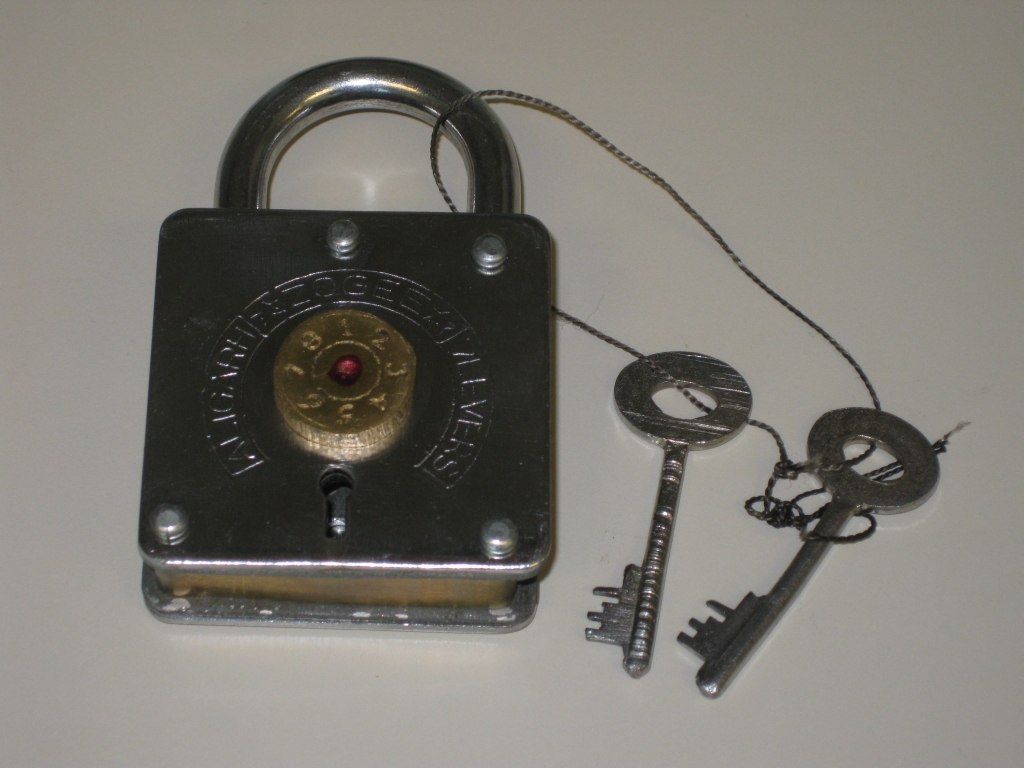 Number four is an interesting lock, with a combination dial on the front face. Again, the back of the lock will come in handy when trying to solve this lock, as there’s a handy clue stamped into the back for you if you’re paying attention. The dial itself is fairly roughly cut and etched with the numbers 1-8, plus a red splodge of ink in the centre. I don’t much care for the red ink, as it really doesn’t add anything, and isn’t particularly well applied. The dial on this particular lock is incredibly stiff, but it is possible to rotate it 360 degrees. It’s easier to stop at 8 and reverse your direction rather than trying to keep going however, so I’d recommend that approach. This is very similar to #2 in the series in terms of opening the lock, but the mechanism is different enough to be worth opening even after solving the earlier lock. 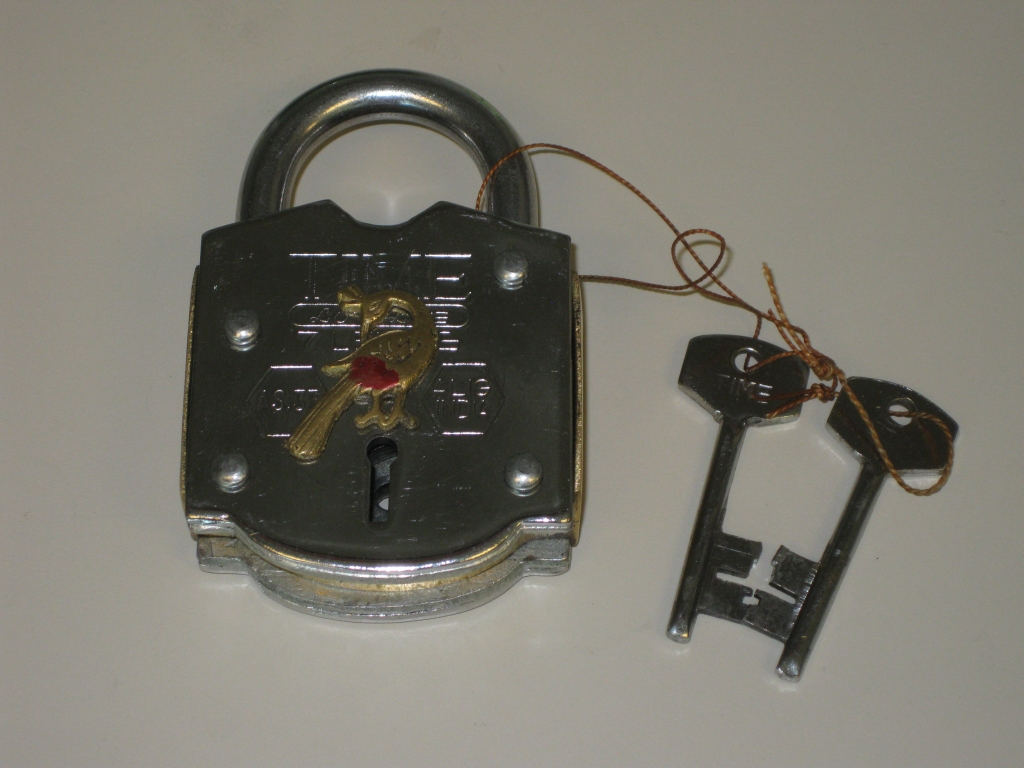 The final lock in the series is the heftiest lock in the set, and the central core of this one looks to be hewn from a solid block of brass, unlike the other locks, which use thinner plate bent to shape. The bird on the front has again been splashed with some badly applied red ink, which really does nothing for the look of the puzzle. This time there’s no obvious hints on the back of the puzzle, so you’re on your own with this one. It’s not the most difficult of locks, but could keep you busy for some time trying to understand how the mechanism works. Even though you can see clearly into the guts of this lock, you’ll not find any clues there either. This is probably my favorite, as it’s the most challenging lock in the series.