A while back, I got in touch with Vaclav Obsivac and placed an order for several of his puzzles. Amongst those, I asked for a copy of the Twisted Half Cubes, and Diagra puzzles. 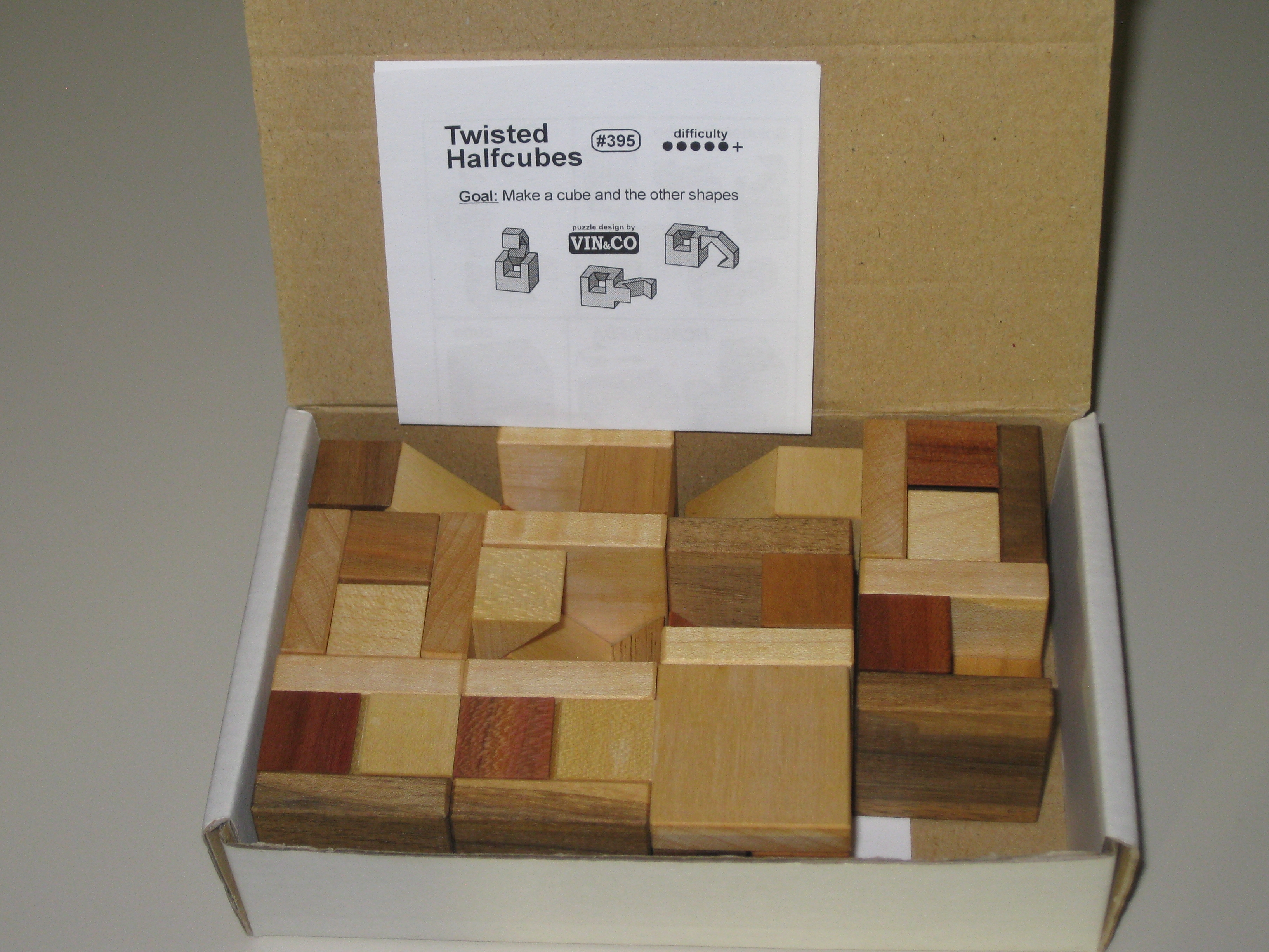 Vinco's Twisted Half Cubes in the box

Vinco's Diagra in the box 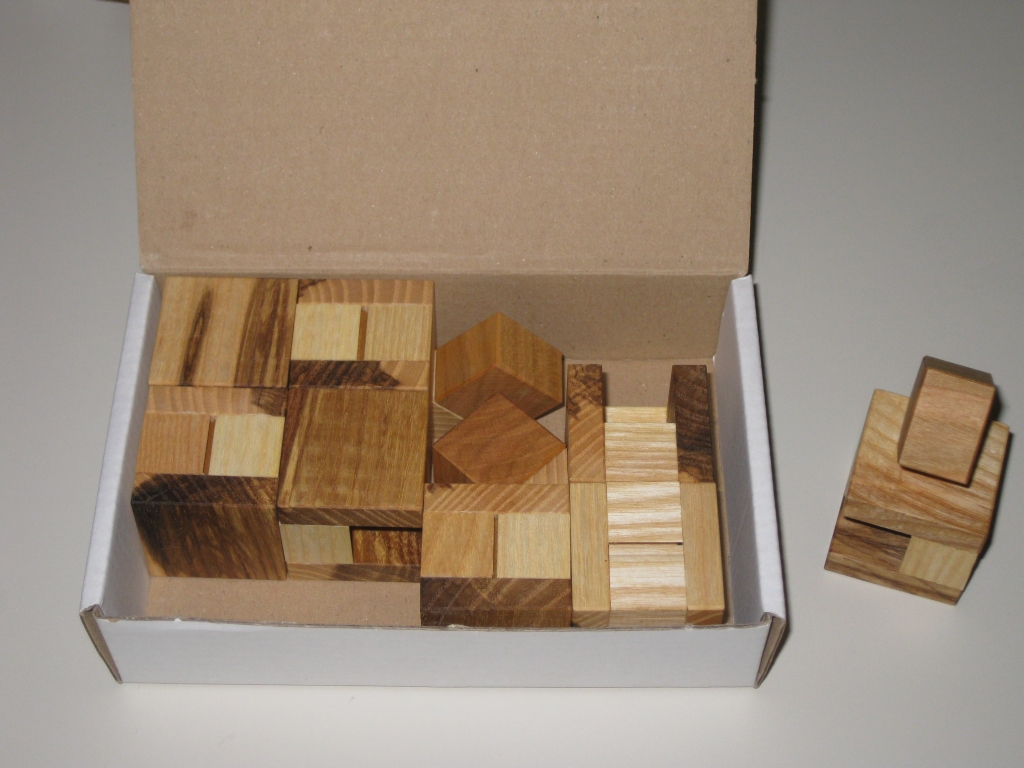 Packing the pieces back into the box is a puzzle of its own!

To look at, both of these puzzles look very similar. Indeed, they have the same basic idea at their root. Both puzzles have eight pieces which combine together to create solid cubes. The goal of the puzzles is to create various solid shapes with no ‘legs’ sticking out of the final assembly. This sounds pretty simple, but I can assure you that it’s really not. In all honesty, putting the pieces back into the box provides a packing puzzle of its own, as the box is too small for all the pieces to be placed in without some level of interconnection!

All of the puzzles in this series are made from varying woods, and have been lightly waxed. No stains are used, so the natural wood is left on show, which is one of the factors that I really admire from Vinco’s puzzles. As with all of the Vinco puzzles, these are made to the same high quality and tolerances that you’d expect from this master craftsman; and none are expensive at around €14 each. At that price, these are really hard to pass up. 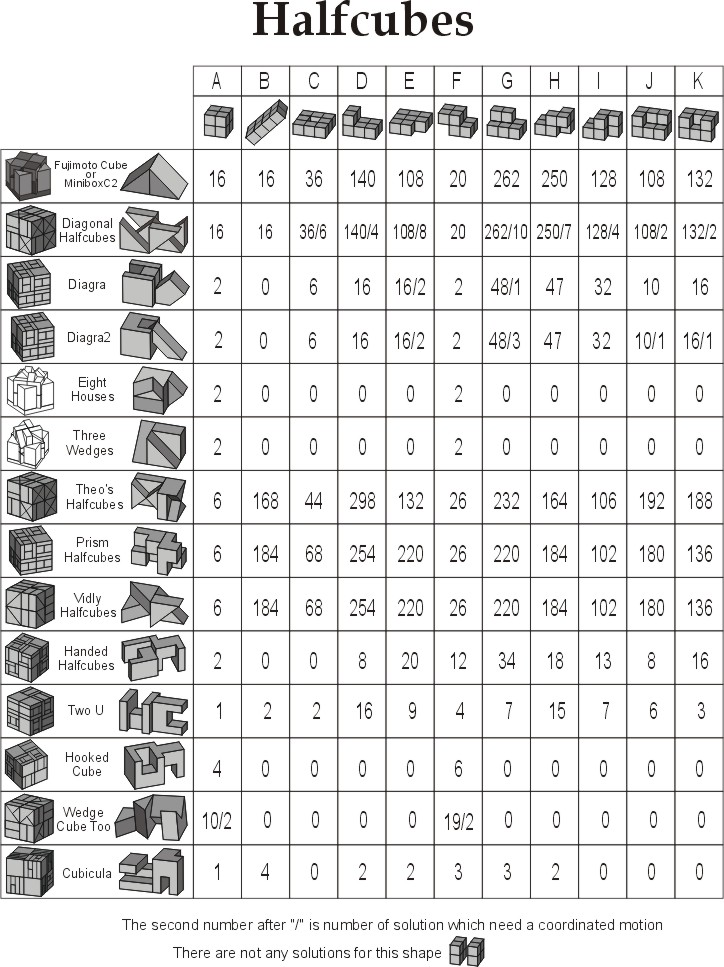 The beauty of the set of these puzzles, which includes (naming just a few) the Diagonal Halfcubes, Vidly Halfcubes, Prism Halfcubes, Two U, Cubicula, Hooked Halfcubes and Handed Halfcubes, reviewed by Kevin (where he also reviews Diagra), is that you can own all of them and they all provide a new and unique challenge. Despite the basic idea being the same, each puzzle is a new challenge, and requires a new way of thinking to solve it. The partial list is shown in the chart here, along with not only the suggested solution shapes for each puzzle, but also how many different ways each shape can be created. There’s a lot of puzzling possible and that’s if you only try for the suggested solutions. Click on the image to the right to see a list of many of the puzzles in the series in a more readable size.

The eight pieces of the Twisted Halfcubes puzzle

With the Twisted Halfcubes, the legs of the puzzles are all hook shaped, and hook around the small internal cube on another piece, linking the two puzzle pieces together in such a way that they will support each other. The differing angles at which the legs are attached make the problems more complex, as you need to find the right pieces to take the puzzle in the direction you need. In most cases, it’s not possible to create a closed solution by simply adding the next piece to the previous in a sequential manner. Most closed loops need you to approach the puzzle by thinking about two halves which will rotate together into the final shape. I really like this feature as it adds an extra challenge to the puzzle space, and also limits the use of programs like Burr Tools for solving the shapes. 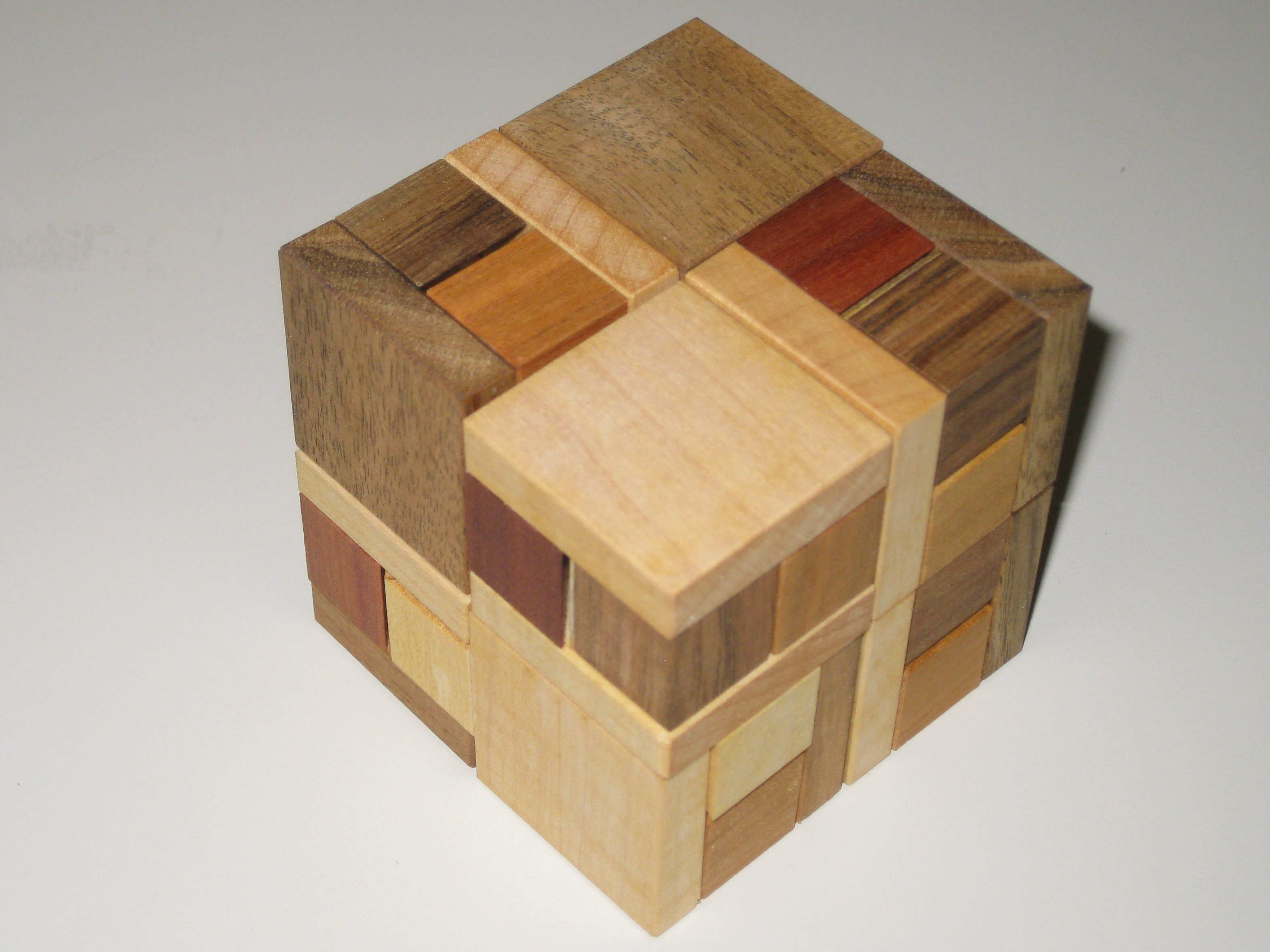 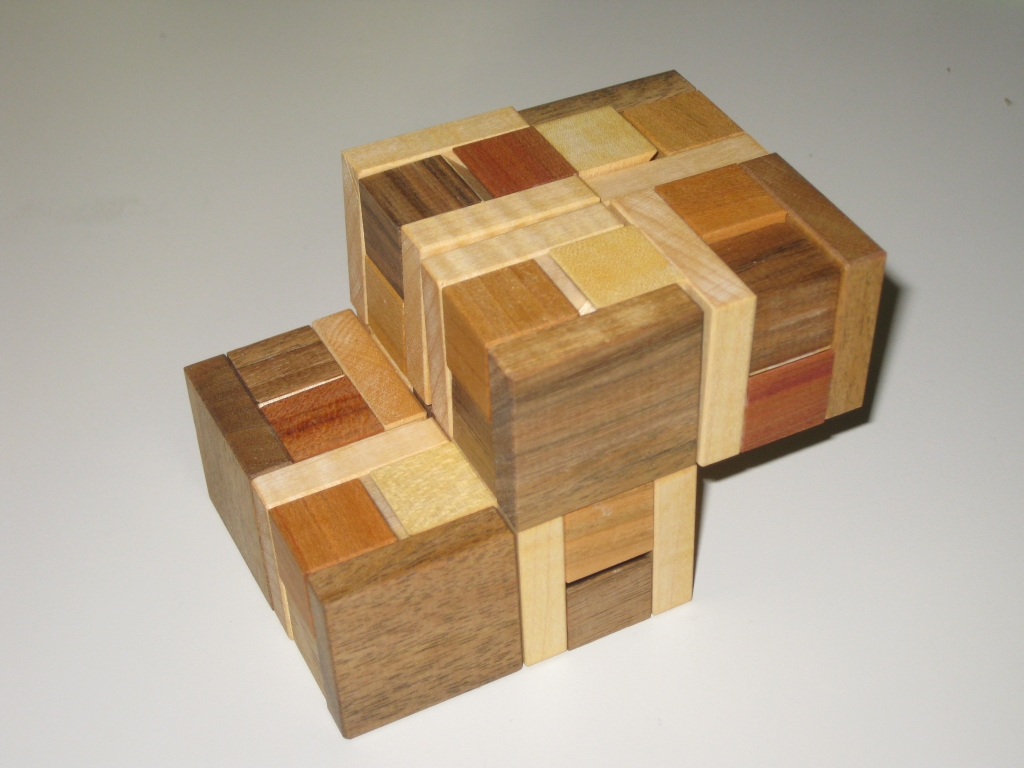 Vinco sets a number of possible solution shapes of which just a couple are shown above. The solution on the right shows how the pieces support themselves when placed together, so shapes where some pieces do not need to be resting against the desk are possible. I promise that there’s nothing out of view of the camera holding the pieces up.

The eight pieces of the Diagra puzzle

Similar in design to the Twisted Halfcubes, here the hooks have been replaced by square blocks, meaning that all pieces slide into each other. The difference here to the Twisted puzzle is that coordinate motion solutions are now possible, as the pieces are no longer hooked to one another but slide together. Again, the interesting location of the ‘legs’ makes for some challenging goal shapes and the approach to joining the pieces together is different from the previous puzzle.

I would say that the basic shapes are easier in Diagra, and perhaps this is a more enjoyable set to play with since it’s faster to put the pieces together and take them apart than it is with Twisted Halfcubes. The challenge level does step up a notch when you start looking for the coordinate motion solutions though, so don’t underestimate the challenge from this one. 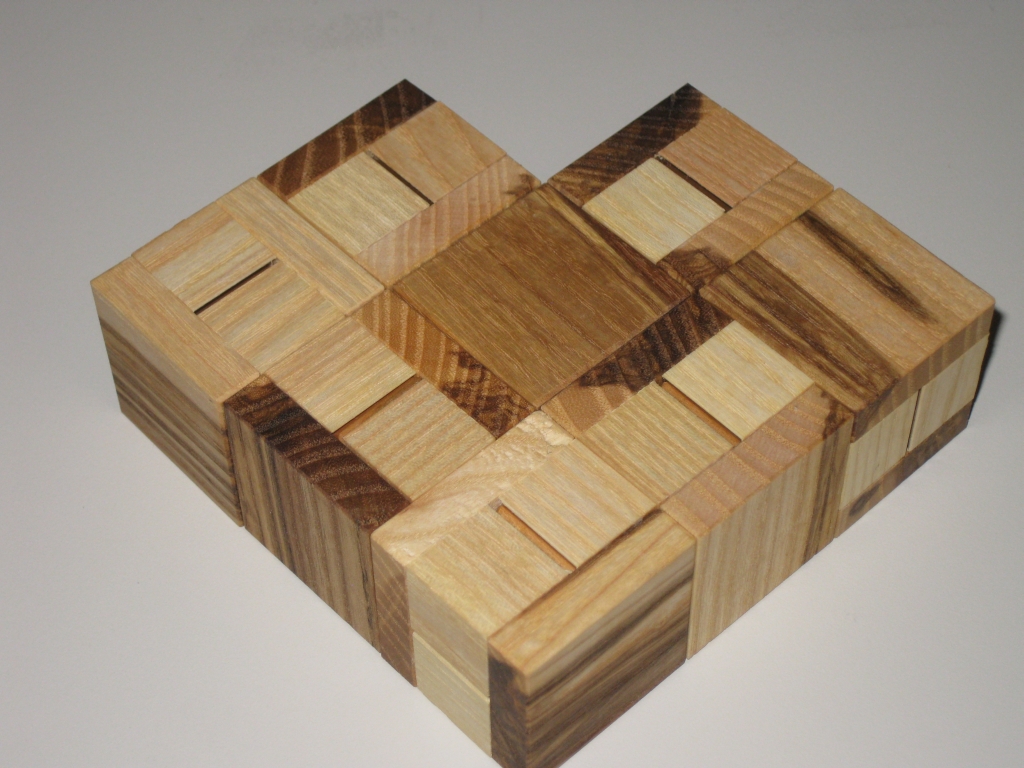 As noted in the comments for the solution above on the right, a coordinate motion is required to make this shape. The image on the left shows how the three sub-units join together to make the final shape, and all slide together at the same time, with a satisfyingly smooth movement. Have a look at the very short video below to see this in action.

The beauty of these puzzles are that you’re limited only by your imagination as to the shapes you can create. These make a great set of building blocks, and just playing with connecting them in different orientations is as much fun as trying to create the specific patterns on the short instruction sheet provided. I’ve spent a lot of time doing just this, and as such find it a great stress toy when it’s a rough day at work!

You can order these puzzles directly from Vinco or through Puzzle Master, and I highly recommend any of the Halfcubes series. I will certainly be picking up more of them myself.