Cast Violon is yet another superb puzzle from the Hanayama Cast Series. This puzzle was originally created by Joseph L. Litle in 1965, the Cast version was adapted by Nob Yoshigahara. Puzzle Master kindly sent me this puzzle to review. 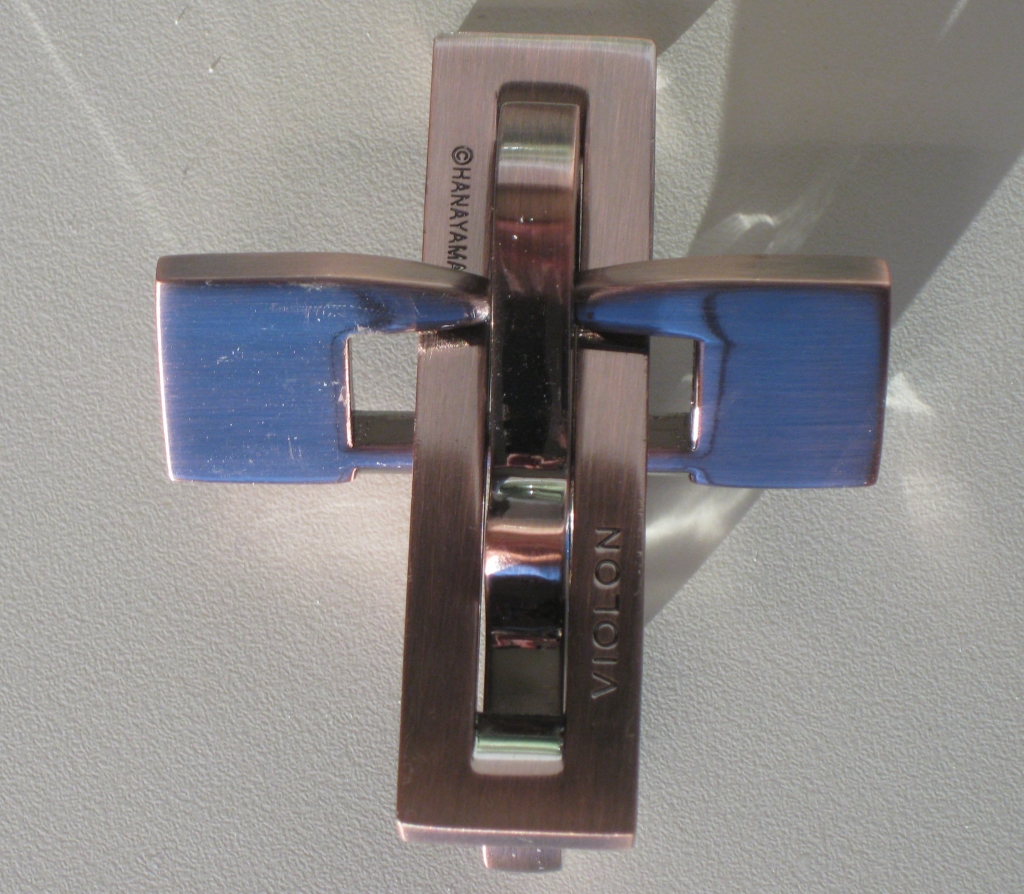 Cast Violon in the starting state.

Nob had this to say about the puzzle.

“Patented in America in 1965, this puzzle was originally created by Joseph L. Litle. The idea to make this puzzle came to me after playing with a wooden copy built for me by my close, but now deceased friend, Tadao Muroi. The proportions have been changed considerably from the original plan in this new version. With this puzzle being styled after a violin and its strings, the word here is…’string’.

From the top, it’s difficult to see the violin shape which gave the puzzle its name, however this side view shows things much more clearly. 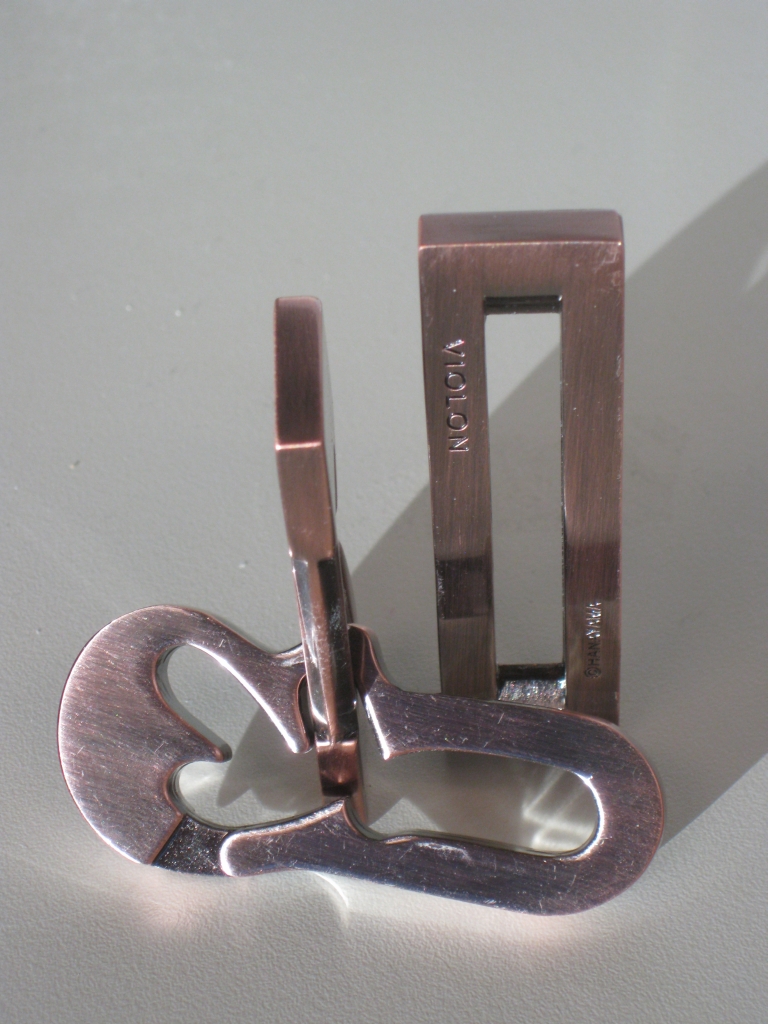 Side view with the puzzle solved

I really love the aged bronzed look of this puzzle. It suits the style perfectly, and as is normal with the Cast series, it’s a heavy puzzle in your hands. The pieces are all solid and well made, so there’s no fear of anything breaking or bending as you play with the puzzle. It also seems to have a clear coating over the finish to protect it, which seems to be important as I’ll mention later.

The body of the violin creates a maze of sorts which the broken loop runs around. The aim of the puzzle being to remove the rectangular piece with the Hanayama logo and puzzle name from the rest of the puzzle. The thinner section in the violin allows the broken loop to either be fully inside the violin or to run around the outside and it should come as no surprise that a combination of both states is required to solve the puzzle.

Have a look at my video review to see the puzzle close up and get an idea for how the puzzle moves.

At first look, the exit point isn’t entirely obvious, however with a little amount of playing it should become clear where you need to take the ‘string’ off. Puzzle master rates this as a level 6 – tricky (scale of 5-10), and Hanayama rates it as a 2 (scale of 1-6). I think it’s a fair estimate of the difficulty. I was able to solve this in around 5 minutes, and was able to return the puzzle to its starting state in just a few more.

The alignment of the pieces when taking the puzzle apart and putting it back together is crucial. If you’re off by a fraction, getting the pieces apart or back together becomes virtually impossible. Having said that, I’ve seen the pieces some apart in a number of different ways and I’m not quite sure how I managed all of them as the pieces don’t seem to go back the same was I watched them come apart! Get everything just right though, and the pieces slide together seamlessly. 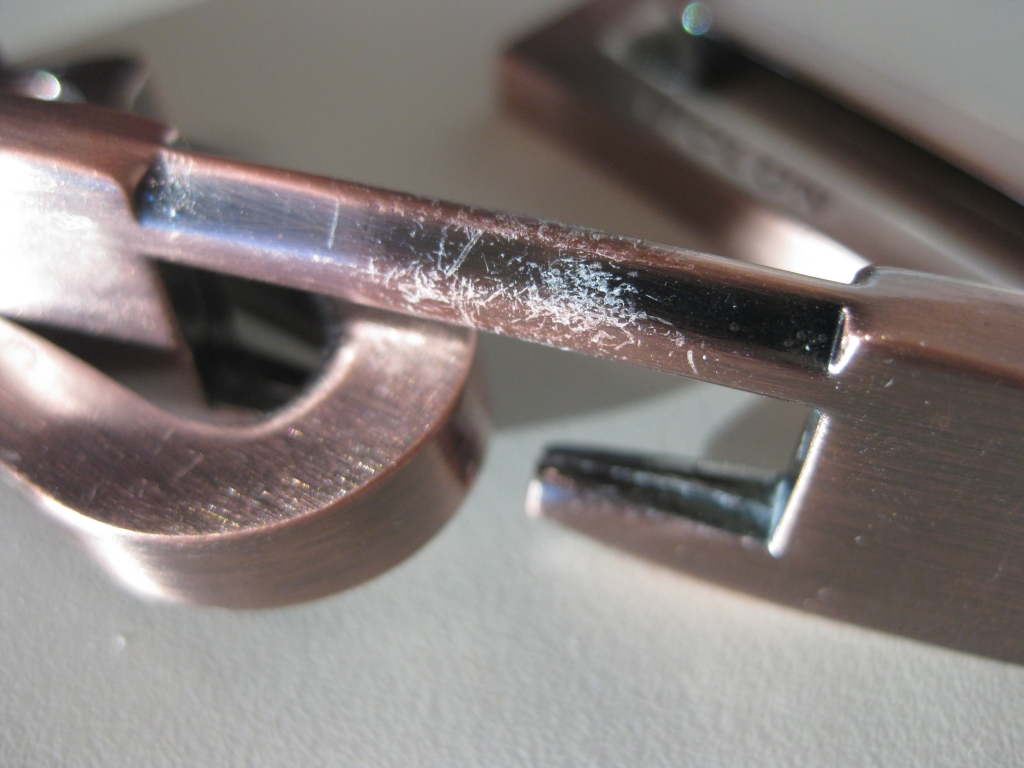 The scratches that have appeared on my puzzle.

My only small gripe with the puzzle is that on my copy, the finish has started to become scratched, showing bare metal underneath. From a distance, you’d never know, and it is minor, however it’s not something I expected from a Hanayama puzzle. I think the clear coating that I mentioned earlier just didn’t make it onto the section of the puzzle, as there’s no issues anywhere else!

Overall, this is a nice puzzle. Not tot challenging, and will be able to be solved in a reasonable time by most people who pick it up. If you’re still struggling, you can download the solution here. You can’t really go wrong with a Hanayama cast puzzle, and this is no different.