As promised previously, here’s the third review in the Revomaze series, available from Revomaze and also in limited numbers from PuzzleMaster. 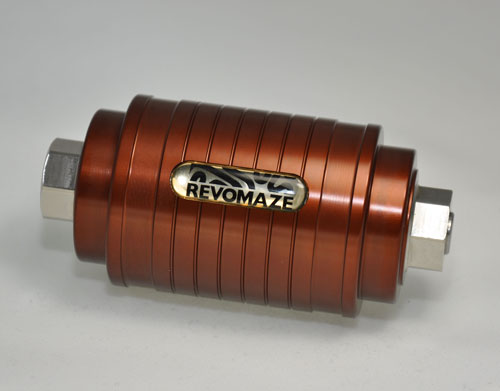 The third puzzle from Revomaze is the Bronze. This puzzle isn’t available as a plastic puzzle, as it’s not possible to create some of the internals in plastic.

The Bronze is rated by Revomaze as having a difficulty of 80/100 (extreme) and an estimated opening time of 40 hours. It is described as a dynamic maze and is the first puzzle in the series that really challenges you to think as well as feel your way through the puzzle. This is a big jump up from the Blue and Green puzzles, and this is where many people seem to get stuck in the series. It’s no longer just a simple maze to get from the start to the end. There are obstacles in the way which you really need to think your way around.

The first big challenge you meet in the Bronze after only six moves is lovingly referred to as “The Pool”. This is a trap, with no easy way to reset the puzzle. So from the first few turns in this puzzle, it’s clear that the rules you thought you knew have been broken. Also gone are the nice straight lines you have been used to in the previous two puzzles. This one is full of curves, which adds an extra challenge. The puzzle falls into three sections, with some real thinking required to move from one section to the next. To begin with, you can only move through around the first quarter of the space available in the puzzle, with no seeming way to move further. The way forward is in understanding the new elements in this maze, and getting over the feeling that “You know how this works” and “That can’t be possible”. The biggest challenges in this puzzle are your assumptions as to what is happening inside. More often than not they’re wrong.

The key to solving this puzzle, as with most of the puzzles is in creating the best map you can. You should also be used to how the pin feels when it’s in the maze by now, and that is key to understanding what’s going on. The dexterity required here also goes up a notch, and having toughened up your fingers on the previous puzzles will certainly help.

It took me around 6 hours to open the Bronze, but I’ll admit I had already played a little with the Silver before I attempted Bronze, so I understood some of the new mechanisms that were introduced in Bronze, making that a little easier. Bronze is my favourite in the series, and probably the one I’d recommend if you want a real challenge, and can only afford one puzzle. You’ll not regret it as seeing the core of this puzzle is a work of art. Don’t blame me if you spend many hours on this one though. It’s a tough puzzle but well worth the effort.

I’m asked fairly frequently whether the Blue and Green are needed before solving Bronze. In all honesty, I don’t think they are, but the challenge is much tougher if you’ve not done at least one other Revomaze before attempting this one.