A short time before Christmas, Brian reviewed the Four Colour Map Puzzle made by Artifact Puzzles, and given that my other half enjoys her jigsaw puzzles, and I enjoy puzzles in general, I decided to buy a copy for her as a Christmas gift. 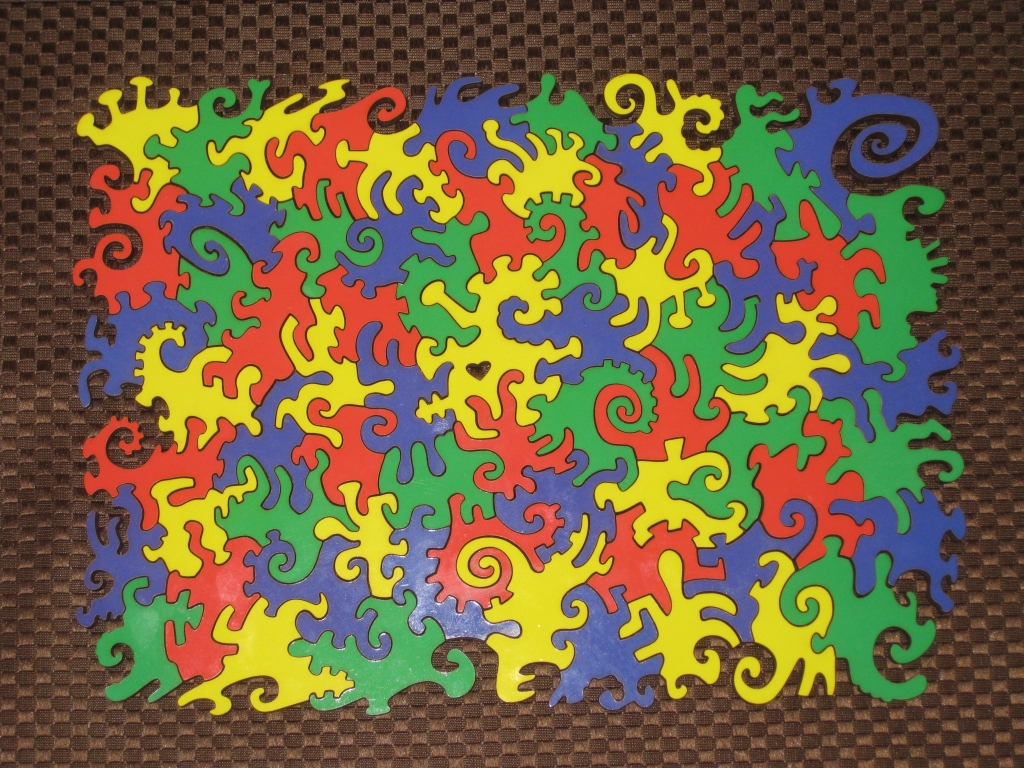 This 68 piece puzzle measures 6″ x 8″ and the pieces are laser cut from 1/4″ wood. The pieces are finished with a high gloss lacquer like finish in very bold colours so the puzzle looks great as a finished article. It comes shipped in a small box, with the pieces in a drawstring bag so overall it’s well presented, and there’s no bulky boxes to have to find space for if you decide to take it apart to store it.

When Jen opened the puzzle at Christmas, she was pretty happy, but we took a few days before we actually sat down to try to solve it. When we did, I think between us we spent around 20 minutes before we even found two pieces that would fit together! Now one of the reasons for that is that the shape of the pieces is based on some work by John Stokes III who is a master hand cutter. The pattern is specifically designed to make it difficult to see how pieces go together.

The task is made slightly easier by the fact that it is also representing the mathematical Four Colour theorem. Have a look at the wiki link for more information, but the short version is that no two pieces touching each other can have the same colour. As such you can narrow down the selection of pieces that will connect.

After getting a couple of pieces together, we found ourselves a little stuck, and ended up with several groups of two or three pieces together, but nothing that was making larger blocks. As we progressed, slowly things became easier until after around an hour we had two fairly large pieces that with a little shuffling around the table we found how they combined into one large piece.

I can say that we had a lot of fun putting this together, and the lack of any ‘final image’ actually adds to the fun of the puzzle. I think most people will agree that the finished puzzle as you can see above is really striking. I love the fact that there’s no straight lines in the puzzle giving a very organic look; even the edges maintain the swirls and curves that make this puzzle so unique.

One thing I will note about the puzzle is that the thickness of the pieces are not very uniform. There’s a fairly noticeable variance between pieces which doesn’t detract from the finished puzzle, but does make things a little more difficult when you’re putting the puzzle together.

I’ll admit that I’m not a big jigsaw fan, I tend to find them fairly dull, and if I want a nice piece of artwork, I’d rather just buy the art, however I did enjoy working on this puzzle as it’s more of a challenge than a standard jigsaw, and isn’t too large that I lost interest. Jen and I really enjoyed putting this together, and despite it being quite different to what Jen is used to, she certainly had fun. Given that the puzzle sells for $32 and uses the Amazon shop, you get a great puzzle, and the piece of mind of using Amazon’s shopping cart, which includes the free shipping. It’s a great puzzle, and I don’t think you can go wrong picking one of these up.